Disagreement is brewing among Krishna's devotees in Vrindavan. While some want to show their love for the god by building temples, others serve Krishna by restoring the forests that were intrinsic to his life 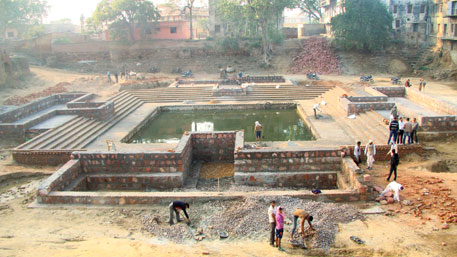 “Neither the cities, the cultured lands nor the villages or their houses are ours.
We are the forest people, dear father, and will always live in the forests and the hills”
— Sri Krishna (Srimad Bhagvatam, Chapter 10, Canto 24, Verse 24)

KRISHNA, the god in Hindu mythology, is said to have lived a simple life. He danced with peacocks, splashed in the rivers, played the flute that mesmerised humans and animals alike and spent his time in the forests herding cows. Srivatsa Goswami, a Vaishnava scholar, considers Krishna’s life to be “the greatest chapter in environmental history”. “One who is devoted to Krishna can never be callous towards the environment, because Krishna himself loves nature,” writes British author Ranchor Prime in his book, Hinduism and Ecology: Seeds of Truth.

Today, Krishna’s devotees are divided in their bhakti. While one camp wants to glorify their master through magnificent temples, the other believes in reviving the very forests where Krishna grew up, now lost to urbanisation. The former thinks erecting monuments dedicated to Krishna is the best way to spread his message; the latter says the right way to honour him is following in his footsteps and caring for the environment. What emerges from these differences of opinion is polarisation in Krishna worship and a debate on the idea of bhakti.

The International Society for Krishna Consciousness (ISKCON), a global Vaishnava spiritual institution with temples all over the world, believes architecture is one of the ways to propagate Krishna’s mission. During a lecture in Mumbai on February 25, 1974, Srila Prabhupada, the founder of ISKCON, said, “Oh, there are so many skyscrapers. Why not construct a nice skyscraper temple of Krishna? That is Krishna consciousness.”

Taking inspiration from his words, ISKCON plans to build a large and swanky temple in Vrindavan dedicated to Krishna. “An imposing temple would proclaim the status of Vrindavan as one of India’s spiritual capitals and attract global attention towards Krishna and his message,” explains Suvyakta NarasimhaDasa, president of the Vrindavan unit of Akshaya Patra Foundation, a charitable body set up by ISKCON to look after the new temple. 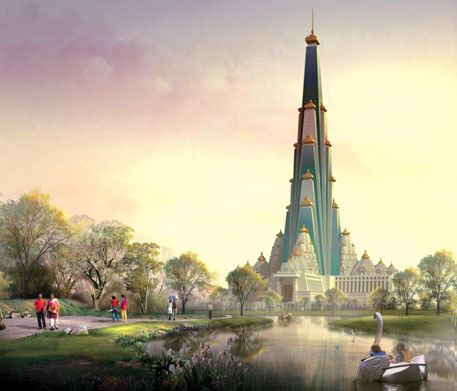 On the other hand, Braj Foundation, a non-profit led by senior journalist Vineet Narain, focuses on rejuvenating the forests associated with Krishna’s life. “Krishna was a primordial environmentalist. This is my way of worshiping him. One who serves Braj serves Krishna,” Narain says.

Braj, spread across 5,000 square kilometres around Mathura-Vrindavan in Uttar Pradesh, is Krishna’s own body, claim vedic texts. Once upon a time, the region had 137 forests and 1,000 kunds or water bodies. Today, only three of the 137 groves, associated with the legend of Radha Krishna, remain, while the rest have been lost to rapid urbanisation. Most of the kunds have either silted up, been encroached upon or have become garbage dumps. Braj Foundation aims to rejuvenate the water bodies, forest groves and hills in Braj, in what it considers is the best form of Krishna bhakti.

If Braj is abundant in forests and kunds that find mention in vedic texts, it also houses brick monuments dedicated to Krishna. Vrindavan, where Krishna spent his childhood and adolescence, is called the “heart of Braj”. Today, the town has at least 5,500 temples and hundreds of dharamshalas (shelters) and hotels to cater to more than six million tourists who visit the town every year.

A swanky building for God

ISKCON’s proposed temple will be another addition to Vrindavan’s concrete jungle. The Chandrodaya Mandir is being built on the outskirts of the town in collaboration with the Kolkata-based Infinity Group. The glass-and-steel temple, spread over 2.2 hectares, is set to be the world’s tallest, measuring 210 metres with 70 floors. This is taller than the Qutub Minar in Delhi, which is 70 metres tall. The foundation stone for the proposed temple was laid in March this year and construction is expected to be completed in five years.

According to the project brief of Chandrodaya Mandir, the grand temple will be surrounded by 12 hectares of forest area to recreate the forests of Braj, including the 12 verdant forests, mentioned in Srimad Bhagvatam, where Lord Krishna is believed to perform his raasleelas (love plays). A Yamuna creek that will be recreated in the forests will provide boating opportunity to visitors. The building will also house a helipad, an amphitheatre, a hi-speed lift and a 4D theatre. The entire project area spreads across 60 hectares, equivalent to the size of six Akshardham temples in Delhi, and will also comprise residential villas and apartments with modern facilities. 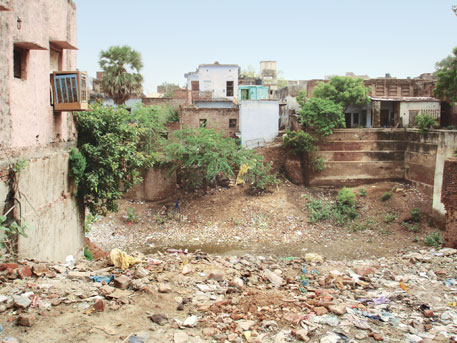 In its eagerness to serve Krishna, ISKCON seems to be indifferent to the troubles Brajwasis (people of Braj) might face from a grand temple in their vicinity. The water for the temple, toilets, kunds and the creek would be extracted from the ground. “The Yamuna is 5 km away from the project site. As it is difficult to lay a pipeline for such a long distance, we have identified a groundwater source 3 km away from the temple. Soon, boring will be done and pipelines will be laid,” Dasa says. He claims that the Foundation has already acquired environmental clearance for the project from the State Environment Impact Assessment Authority.

Manoj Mishra, convenor of YamunaJiye Abhiyan, a non-profit in Delhi, says, “This is another Akshardham temple in the making. In the name of God, natural resources are being plundered. Groundwater is already scarce in Vrindavan and its overextraction may further harm the environment.”

Dasa estimates that the temple will consume 5-6 megawatt (MW) of electricity per day, of which 2 MW would be generated from the solar panels in the temple’s parking lot, which can hold 2,000 cars, while the rest would be bought from electricity grids.

Jagannath Poddar, head of Friends of Vrindavan, an environment non-profit, says that urbanisation and prolonged negligence have pushed the kunds, also known as sarovars, in Braj to extinction. These kunds once served as perennial sources of freshwater. “It is sad to see the resources of Vrindavan being destroyed by people who are promoting real estate business here in the name of Krishna,” he adds.

Braj Foundation has been striving to restore the ecological, architectural and cultural heritage of Braj, which it says reflects the “intertwined relationship between environment, people and the Supreme Lord”. Since its formation in 2005, the non-profit has restored 46 water bodies, three heritage buildings and two forests in Braj. The foundation has also been campaigning against mining on the hills. It plans to restore all 1,000 kunds in Braj associated with Krishna. 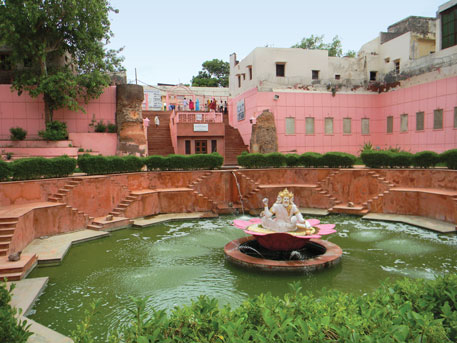 In 2006, it took up work to desilt the Rudra Kund in Jatipura village in Braj, remove encroachments and restore the water body. But it faced opposition from encroachers, who went to the Allahabad High Court and got a stay order against the renovation of the kund.

The order was lifted after five years of legal battle. In June 2011, the Braj Foundation resumed its work and with the help of the district administration and police, demolished unauthorised construction around the kund. Once dry and filled with garbage, Rudra Kund now sparkles with clean water. “After we desilt the kunds and declog their recharge wells, we start working on their beautification so that people know the religious and historical significance of the place,” Narain says. He adds that the funding for their work comes from private sponsorships. The non-profit also focuses on planting trees like kadamba, radha and krishnachura associated with the legend of Radha Krishna. It promotes cow-based agriculture and organic farming too. “Butchers are stealing cows and killing them for meat. Most of the charitable gaushalas (cow shelters) do not have very goods standards of care. We aim to reestablish the economic viability of the desi cow,” he adds.

Several retired engineers and officials have joined the Braj Foundation to show their love for Krishna. “To seek God, one needs eyes bereft of any worldly attachment. God does not need memorials,” says a monk in Chaitanya Gauriya Mutt in Vrindavan. On Srila Prabhupad’s message to build a skyscraper for Krishna, he says that Prabhupad’s words must have a deeper meaning. When this reporter tried to verify the same from Dasa, he said, “Religious texts are interpreted in two ways; symbolic and literal. We are literalists.”

Swami Sivananda of Matri Sadan Ashram in Haridwar believes people have misinterpreted Hinduism. “While temples and memorials to mark sacred places are necessary, building a 70-storey temple in a place where there are a thousand others is showing off,” he adds.