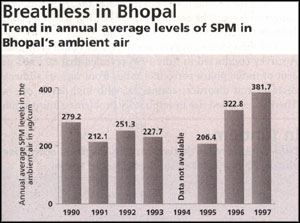 The number of premature deaths due to high levels of spm in Bhopal are estimated to have decreased from 663 in 1991-92 to 623 in 1995. Similarly, the incidence of illnesses have also gone down from 2,77,854 to 2,61,205 over the given period. But despite the data giving happy signs, the report filed by the dte reporter reveals that Bhopal may steadily be turning into a gas chamber.

A report prepared by the Environment Protection and Coordination Organisation (epco), Bhopal, on the state of environment in Madhya Pradesh says that the situation of alarming. In Bhopal, spm levels have increased to ten times the acceptable Indian limit of 100 g/cum for residential areas. The report is silent over which period the increase was noted but Madhya Pradesh Pollution Control Board (mppcb) says it was between 1988 and 1995.

The number of vehicles registered in Bhopal jumped from less than 1,00,000 in 1985 to 3,22,200 in August 1997. About 35 per cent of the vehicles run on diesel and are a major source of spm . Diesel jeeps are particularly popular in Bhopal. But increase in the number of vehicles is not the only cause of air pollution. Adulteration of fuel is also responsible. The mppcb says that 90 per cent of petrol and diesel dealers sell adulterated fuel. Despite random checks and punitive measures by district authorities, the problem continues. Moreover, some autorickshaw drivers have learned to mix huge quantities of kerosene in petrol. Though this damages the piston frequently, a change of piston is much cheaper than using petrol, which is priced at Rs 25 per litre as against kerosene that is available at Rs 3.5 per litre in Bhopal. Even engine lubricating oil that is sold loose is often made locally and is of inferior quality. These affect the overall performance of vehicles, again leading to high levels of spm .

Air quality is regularly monitored at three junctions of the city by the mppcb , namely Hamidia road, Govindpura and South Tatya Topa Nagar. Data reveal that annual average levels of spm in Bhopal have decreased from 279.2 g/cum in 1990 to 206.36 g/cum in 1995. However, mppcb data for 1996 and 1997 indicates that spm levels again increased over the last two years. In a two-day emissions check in the second week of September 1997, 57 per cent of vehicles in the city were found to be violating the acceptable limits. What makes the present levels of spm alarming is that there are no thermal power plants or pollution-causing industrial units in Bhopal. Also, most parts of new Bhopal have adequate green cover.

Though there has been no study to monitor the increase in pulmonary problems to establish their link with air pollution, doctors say that such ailments have increased by about 20 per cent. Pradeep Prahalad, a general practitioner (gp) in Bhopal, says there has been a marked increase in the incidence of pulmonary problems over the last few years. The numbers of cases rise in winters when the air is still. Naeem Khan Agha, another gp , concurs. He says that an increasing number of children are developing bronchial allergies in Bhopal and most of them come from polluted areas.

Sathinath Sarangi works at Sambhavna, a local ngo that funds a free clinic in the city. He says that there has been a steady increase in the number of cases of allergic bronchitis that are not limited to those exposed to the leakage of methyl isocyanate (mic) gas from the Union Carbide plant on December 4, 1984.

After the gas disaster, Bhopal should have been made an example of a pollution-free city. But unfortunately, air pollution is at its worst today in the city. Auto emissions and lack of motivation on the part of the authorities are much to blame.