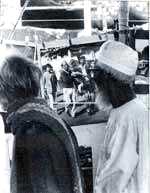 DECEMBER 3, 1994. The stage was set in Bhopal, again, for an army of people. Mediapeople. Activists. As for those who had rushed out of their homes 10 years ago to the day straight into the most poisonous mist the world had seen since mustard gas had ravaged the fields of France in the First World War were either numbers in the Indian government's list of dead, or were living a slow death.

The rest was duty: those affected and mobile attended the right rallies and raised the right slogans; activists almost inactivated during a decade of strife with government and the law renewed their pledges to continue to fight for the victimised. The day vanished with demonstrators erecting 50 symbolic tombstones in front of the silent and rusting Union Carbide plant.

The annual Bhopal juggernaut had rolled on as usual.

Behind it all is the fact that those who have survived are worse off than those who didn't: with about 500,000 compensation claims lying in the in-tray, the process of identifying and compensating the victims is tied up in knots; the restorative administration measures like state- and activist-supported cottage industries employing the victims have all closed down; the hospitals are comatose.

On its part, the government is insisting on balancing the issue on the scales of cash compensation when the victims are thinking of jobs. Even here, the process of doling out the cash has been jerky at best, with only 100,000 of the 600,000 victims having received some compensation out of the US$ 470 million paid by Union Carbide in as long ago as 1989.

With about 50,000 victims in desperate need of employment, the Bhopal Gas Peedit Mahila Udhyog Sangathan (BGPMUS), the largest survivors' organisation, is also stressing more on jobs than on dole. That mere compensation is pathetically insufficient is evident from the deep meas Mohammed Ali is in: he was given Rs 25,000 as compensation after he has already spent double the amount on medical treatment. "I am heavily in debt and feel that government-aided employment would have served me much better than the short-term cash award," he says. He is also vehement about the "beggarly habits" that dole encourages.

The victims have had no alternative but to endure the state-imposed, highly centralised medico-legal structure as compensation is determined by the courts on basis of medical reports. Fumes Abdul Jabbar Khan, convenor of the BGPMUS, "The victims are treated like criminals and all cases are considered fraudulent unless proven otherwise. Compensation depends on how much bribe the victims are capable of shelling out."


Government high-handedness started with the registration of gas victims by the state's Directorate of Claims, which issued a series of notifications instead of carrying out door-to-door surveys, maintains Satinath Sarangi of the Bhopal Group for Information and Action. Those who did not possess a medical report or who were too ill to report for registration were not registered.

Newly acquired computers added to the confusion as faulty programmes and names incorrectly spelled in English resulted in many of those registered not receiving any notification for medical examination. Take Razia Sultana. Busy tending to an ailing husband, she neglected taking a medical examination, little knowing that it would determine her compensation. Also, her children were not registered on the official assumption that compensation to minors would be linked to their parents.

In the 38 claims courts set up by the Welfare Commissioner in 1992, victims are often coerced into signing a document in which they promise not to appeal against the assigned medical categories. "This is trickery," cries Saju Bai, who did not know what she was signing and has lost the right to appeal against the "no injury" category despite clearly exhibiting signs of mental disorder. To escape the legal tangle, Jabbar suggests a flat compensation of Rs 50,000 to all residents of the 36 city wards directly affected by the leak. He would also like the courts to handle only appeal cases and consider cases where victims are excluded from the redressal process.

The centralised public health system has also fallen flat on its face. As a result, the number of private practitioners has burgeoned to 5,000 form a mere 800 in 1984 and private clinics from 18 to a mindboggling 200. On top of it, the government has reduced health expenditure to Rs 5.5 crore, a crore less than last year, despite more than 1,000 people flocking daily to each of the 4 hospitals set up specially for the purpose, and doctors still recording rampant cancer, tuberculosis and eye ailments.

Rehabilitation was politisied to an extent that the erstwhile Bharatiya Janata Party (BJP) government in Madhya Pradesh closed down 6 sewing centres employing 2,300 gas-affected women and neglected to open the special industrial area, which could have provided jobs for more than 20,000 victims. The issue was given a communal colour when the party relocated the predominantly Muslim victims from the Upper Lake area of the city to Badwai and New Gandhi Nagar, about 12 km away from the city. "By replacing us so far away from the city, the government has deprived us of the means to earn a living," says Yunus Khan.

Poor redressal has resulted in survivors' groups entering the political arena in a big way. The BGPMUS, for instance, fielded 6 candidates under the Janata Dal banner in the November 26 municipal elections. Warns Sarangi, "Victims must guard against exploitation of their needs by vested interests", and survivors hope for better days "when our people become politicians".

That will be some compensation.