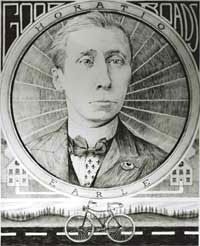 On May 30, 1896, Cosmopolitan sponsored a race of horseless ca-rriages in New York. In it were four Duryeas, a Booth Rogers and, from Paris, an Armstrong. After a parade of the participants, the race began. One Henry Wells of Springfield, Massa-chusetts, was driving a Duryea motor wagon when he lost control of his vehicle, zigzagged down the roadway and collided with another vehicle, injuring one Evelyn Thomas. The police, not yet experienced in vehicular crashes, arrested Wells and held him pending word on Thomas’s condition. She had fractured a leg, but police were told that she would soon recover. Wells was released.

This was the first recorded motorcar accident in history. It occurred on Memorial Day when Americans were honouring soldiers who died in the Civil War. Thomas was among the thousands of New Yorkers out riding their bicycles to celebrate the occasion. She was riding a Columbia, which cost $100—quite a steep price tag when the average monthly wage of Americans was less than $30.

The accident spurred the League of American Wheelmen into action.

The league was founded in 1880, after a three-day long meeting of bicycle enthusiasts, riding clubs and manufacturers in Newport, Rhode Island. Bicy-clists, known then as wheelmen, were challenged by rutted roads of gravel and dirt and faced antagonism from horsemen, wagon drivers and pedestrians.

According to historian Peter Hugil, road maintenance in the late 19th century was a haphazard affair with the majority unpaved. Roads turned into muddy pits in the winter and potholed washes in the summer. Between 1880 and 1890, the league’s members held conventions and demonstrations, published material on the benefits of good roads and tried to influence legislators. The league also pressed the idea to farmers and rural communities, publishing literature such as the famous pamphlet, The Gospel of Good Roads , in which the state of American roads was compared, through a long and hilarious anecdote, “to a drunk-ass husband”.

Addressing farmers the pamphlet noted: “Your farm wagon is a machine, pure and simple, and the road bears the same relation to your wagon that the steel rail bears to the railway car.” Pointing to the social imbalance between rural and urban life, which troubled farmers, the road reformers claimed poor roads put rural families “in the rut” and “kept them there”, whereas good roads provided for neighbourhood social life, prompt medical and mail service, and cheaper means for hauling produce to market.

Wheel restaurants—usually pushcarts where the good road movement’s pamphlets were handed with the food—became one of the means to spread the movement to rural areas. Between 1870 and 1890, little effort was made to connect rural communities, and not much attention was given to the construction of a connected system of highways throughout the counties. Taxes collected to maintain roads were spent poorly. 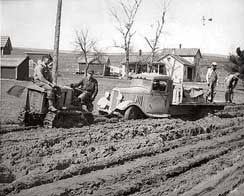 In Tennessee, the wheelmen’s agitation got linked to the Country Life Movement, which sought to reverse the exodus of young people to cities. The farmers also wanted to break the railroad’s monopoly on the shipment of farm products. Historian Peter True writes by the end of the 19th century councillors in Tennessee, Wisconsin and New Jersey could not hope to win elections without the support of the Good Roads Movement.

The movement achieved its first success in 1891, when New Jersey became the first state to form a State Highway Department. Massachusetts followed suit in 1892. The movement also successfully lobbied the Michigan Legislature to pass the County Road Act of 1893, which permitted each county in the state to establish road commission and levy road taxes.

All but one of Michigan’s 83 counties eventually created road commissions.

A lot of the movement’s success in Michigan owed to cyclemaker Horatio Sawyer Earle. Elected to the Michigan Senate in 1890, Earle pushed through legislation to create the State Highway Department, now known as the Michigan Department of Transportation.

According to The New York Times, Earle was among the first to visit Evelyn Thomas after the accident. Thomas impressed on the Michigan senator the need for cyclist’s rights. Three months after the accident, New York’s legislators adopted a statute declaring bikes as carriages and gave bicycle operators the same rights as drivers of horse drawn carriages. Courts brought bicycles into the legal system by granting them the same legal rights on streets as operators of other vehicles.

In 1896, the state’s department of agriculture opened an Office of Road Inquiry to assist in the development of better roads, and an often-heard slogan went like this: “Get the cyclist and farmer out of the mud.” The league organized a massive protest in San Francisco in response to a City Charter to leave abandoned rail tracks in place on Market Street. The protestors alleged the tracks damaged wheels making it risky for bicyclists to use the street. Thousands of protesters rode along San Francisco streets to make a point. The tracks were eventually removed. 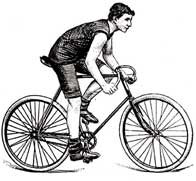 By the turn of the 19th century, the League of Wheelmen had a membership of more than five million—the US population was about 65 million then—and its leader Earle was a well-known figure in American politics. In early 20th century, the cycle manufacturer-turned politician gave Michigan the bragging rights for world’s first concrete highway: Woodward Avenue. Built in 1909 in Detroit, it attracted builders far and near to witness how concrete stood up under the heavy traffic loads of the period. Woodward Avenue proved a success, helping to spawn much of US modern highway system.

Earle was also the brain behind the Lincoln Highway constructed in 1913, the first coast-to-coast improved route in the US. By then, however, the bicycle had begun to lose out to the automobile. Ford T, the world’s first “affordable car”, was on roads. The membership of the league fell to less than two million and by 1920 the good roads movement was hostage to automobile enthusiasts.