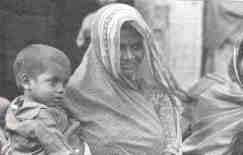 LISSOME Seeta Mahato, 21, married last year, is the healing and humane touch in down and out Hiramiya village, tucked away in the backward Samastipur district of Bihar. Lissome is a lady health worker (lhw). And her team has worked wonders. "In just 6 months, we reduced the spate of diarrhoea and malaria in the village," she says, smiling in understandable pride.

Training the new brides of the musahars, the abjectly poor scheduled caste community, was an ambitious programme that Samudai, an ngo based in Rusera, a block town of Samastipur, started in 1983. "It has somewhat extended health care to the people," says Shubhmoorty, the president of Samudai. It has also made them realise their potential to usher in change in their virtually moribund community. "We had never realised that many exploitative social practices were actually causing illness," says Manki Devi, 23, an lhw from Meoli village. "Our mothers-in-law never allowed us to wear slippers, and we would to eat only the leftovers. Naturally, we got hookworms and frequently fell sick." The lhws nowadays visit every household, armed with diet charts and medicines provided by Samudai, doubling as both health communicators as well as health workers. Among their messages is, "A small family is a happy family."

The lhws address the sensitive issue of pre- and post-natal care. This has been a largely ignored area of healthcare over the ages. Post-natal care, especially, is completely ignored if a girl child is born, due to the existing prejudice against the latter. It was tough convincing the villagers to adopt family planning and care for the girl child. But the times are changing. Rajkumari, a harijan woman of Ram tola (settlement of a particular caste) in Bala village, never got her 3 daughters immunised. "But after my 2-year old daughter died, I got this little one immunised," she says, caressing a 6-month-old girl. And she has resolved not to have any more children.

Dehydration due to stomach ailments is a killer. But the saviour -- the oral rehydration solution of salt and sugar, or jaggery, in water -- was never disallowed. "Letting the sick child even touch water was thought to be harmful," says Janaki Devi, an lhw. But many-a mother is now grateful to Janaki because their sick children have returned from death's doorsteps. "Very few people get diarrhoea now, because we boil water during the monsoons, and eat fresh food," informs Phulesari Devi, 50. "We no longer throw away the mand (starch) while cooking rice, and eat more green vegetables," adds Mahato.

It is tough working through the mazes of superstitions, ignorance and social taboos. But the reward for Lissome and her colleagues is much more than the Rs 300 they get from Samudai each month: the smiles on hitherto tearful faces, the blessings of thankful mothers.