Who should have the first right over sugar produced by Uttar Pradesh's sugar mills - the banks who loaned the mills or the farmers who supplied sugarcane? The Supreme Court gives an interesting verdict 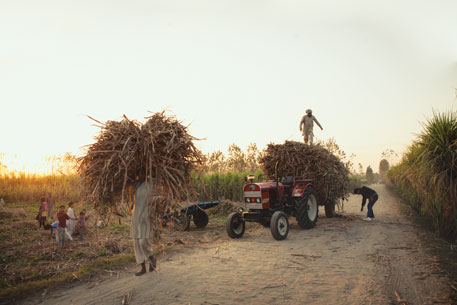 IT WAS a verdictthat anybody and everybody related remotely to sugarcane was waiting for desperately. And when it finally came, it went beyond expectations.

On October 13, a Supreme Court bench headed by Chief Justice H L Dattu set aside the State Bank of India (SBI) and Punjab National Bank’s (PNB) petition challenging an Allahabad High Court order directing sugar mills in Uttar Pradesh to sell the sugar stock hypothecated to SBI against loans to pay sugarcane farmers’ dues. The court did so on the principle that the right to life (of farmers, in this case), superceded any other consideration (the right to trade).

Every year, the sugar mills take sugarcane from cane growers, make sugar out of it, mortgage it to banks and take away one-time money in the name of working capital. Technically, banks have the first right over the sugar while the money from the sale of the rest is to be given to the cane growers. But, the mills siphon off money to various plants, leaving very little for the cane growers’ legitimate price. This causes a huge delay in payment to growers (six months to three years) and the state of financial distress drives them to extreme steps like suicide.

In November 2013, the cane growers’ association, the Rashtriya Kisan Mazdoor Sangathan (RKMS), had filed a public interest petition in the Allahabad High Court, disputing the banks’ right to collateral and requesting them to sell the stocks and pay growers first.

On September 5 this year, the high court invoked Section 17(5) of the Uttar Pradesh Sugarcane (Regulation of Supply and Purchase) Act, 1953, and extinguished the right of secured creditors. It directed collectors to grant permission to sugar mills to sell the sugar stock for payment of dues to cane growers. But the banks disputed the decision and, in turn, went to the apex court. The Supreme Court, in turn, upheld the high court order. It has directed the state to pay dues of Rs 8,754 crore of the last crushing season to cane growers till October 31.

Bharati Balaji, deputy head (legal & taxation), Indian Sugar Mills Association says the judgement is a big setback for sugar mills and banks. “We have been loss-making enterprises for many years. We want the state or the Centre to look into the matter and draft a rule which is acceptable to all parties, including farmers, mills and banks. We will decide our response soon,” says Balaji.

However, the RKMS contests Balaji’s claim. “Despite their so-called losses, they have multiplied their units from 34 to 100 in the past 10 years. How can they be loss-making? They take money from banks, siphon it out to various plants and don’t give anything to farmers,” says V M Singh, the convenor of RKMS.

Banks too are shocked. Banks such as SBI, PNB, Oriental Bank of Commerce and cooperative banks in Uttar Pradesh had appeared before the courts and argued for first right over sugar. The courts rejected this and directed the banks to auction mills to get their dues back. “Is this a judgement? I don’t want to comment over this development,” says a visibly dismayed Suji George, assistant general manager (law), PNB, who is looking into the case.

However, farmers and their supporters are hailing the judgement. “It clearly gives precedence to the right to life over the right to trade,” says Hawa Singh Huda, advocate-general of the Haryana government, “Its effect would be felt in other places too,” he adds.

“Farmers have been exploited for long by the nexus of government, banks and mill owners. It is ironical that while sugar is the base of most of industry, its producers have been exploited by them all. It is a long awaited justice,” says Yudhveer Singh, a farmer leader. P S Birthal, director of the National Centre for Agricultural Econo-mics and Policy Research, terms the judgement a milestone. “I fully agree with the judgement. Millions of farmers borrow money from moneylenders, banks and invest family labour and even then, they don’t get their dues on time. The judgement would help farmers in other cases too, where they have been at the mercy of industry,” Birthal says.

Devinder Sharma, a food policy analyst, says the judgement is such an important one that it will be cited at every national or international trade platform like WTO. “This judgement can be cited on every trade issue where farmers’ produce is directly involved,” says Sharma. “Sugar mills are highly favoured, pampered sectors of the government. On many occasions, the government provides money to mills to pay farmers but they usually divert it,” he adds. In fact, the state and Central governments have given as much as Rs 4,890 crore to sugar mills in Uttar Pradesh, most of which has been diverted. As many as 60 FIRs have been filed in the last one year against mill owners in the state for fraudulent diversion of funds.

The judgement also brought to the fore issues of poor regulation of sugar mills by state governments. “On the one hand, the government raises state advisory price under electoral pressure, while on the other hand, it loses its hold on the mills which only perpetuates the plight of farmers,” says Gopal Naik, who teaches agronomics at the Indian Institute of Management, Bangalore.

Experts think that there should be a proper system in place and farmers should think about having their own cooperative. “It is a failure of the present system that it is unable to check the arbitrary nature of mill owners who fail to pay arrears within 15 days. Cane growers cannot be left at the mercy of private mills. They should think about their own cooperative to come out of this mess forever,” says T Haque, an expert on sugarcane-related issues.

Experts also see this judgement in alignment with a number of previous judgements. S Nagarajan, former chairperson, Protection of Plant Varieties and Farmers’ Rights Authority, said there have been many judgements in the past where the judiciary has taken a progressive stand favouring farmers. “The judiciary views agriculture through the prism of livelihood.

This judgement would give encouragement to a lot of farm enterprises.”