The government turns a Nelson's eye while the construction sector makes hay on phosphogypsum, a carcinogenic byproduct of the fertiliser industry 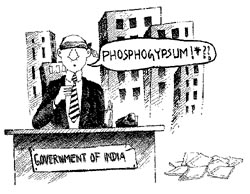 ignorance is bliss. This seems to be the state of mind of the Indian government for several environment-related issues, including that of hazardous waste like phosphogypsum (pg). A byproduct of the fertiliser industry, pg is used liberally by the construction industry and its use is promoted by the government

What the government has failed to notice is that phosphogypsum contains radium-226, which decays to radon gas. Exposure to it can increase the risk of developing cancer. The World Health Organization (who ) as well as the us Environmental Protection Agency ( epa ) have classified radon as a known human carcinogen. Apart from radioactivity, there are trace metals such as arsenic, lead, cadmium, fluoride, zinc, antimony and copper that the epa believes may pose environmental and human health hazards.

In India, pg is used to make construction material such as gypsum plaster, gypsum ceiling tiles, boards, panels and marbles/blocks. It is promoted extensively by the Building Materials and Technology Promotion Council ( bmptc ), ministry of urban development. Based on bmptc 's recommendation, the government has even exempted pg from excise duty. Hence, in addition to what is produced in the country, pg is also imported from countries such as Jordan and Morocco.

Phosphate rock is mined extensively around the world, mainly for use in fertilisers. "After use in fertiliser plants, the byproduct pg is given free of cost to the construction industry," says a distributor of building materials. And, although we have phosphate rock ores in India, too, it is imported from other countries that have higher radioactivity levels in phosphate rock. According to a report by the United Nations Scientific Commission for Emissions due to Atomic Radiation, the radium concentration is as high as 46 picocurie per gramme (pCi/g) in the phosphate rock from Morocco, while that of India has only 4 pCi/g (a picocurie is one-trillionth of a curie, a unit for measuring radioactivity).

As the imported phosphate rock has high levels of radioactivity, the pg it produces also tends to have higher levels of radon in it, say Thomas P Laiche and L Max Scott of Louisiana State University, Los Angeles, usa . And when this is used in making plasterboards or blocks, it could be exposing people to higher levels of radiation.


Way back in 1989, epa issued the National Emission Standards for Hazardous Air Pollutants. The standard required that all pg be stored in stacks. It did not permit any other uses, such as in agriculture or indoor research and development. In 1992, in response to several petitions, epa revised the standard to permit use but a safe limit was set at 10 pCi/g and the international limit prescribed by euratom ( European Atomic Commission) is 13.5 pCi/g. Till date, there is no unanimity on the "safe limit" for radioactive exposure due to pg. As scientists come up with more findings, the limit fluctuates.

This kind of flux on the issue of pg is just what the Indian government and scientists seem to prefer. Says B V Swaminathan, chief (technical services), Fertiliser Association of India (fai), New Delhi: "When the international community cannot come to a conclusion, how can you expect us to do so?" But Partha Sarthi, secretary of Atomic Energy Regulatory Board (aerb), Mumbai, thinks otherwise: "We are well aware of the problem and are carrying out research on the issue. We did some preliminary research in the early 1970s when it was not considered to be a problem. But all of a sudden, it has become a problem... so we are again looking into it." A Gopalakrishnan, director of the Engineering Staff College of India, Hyderabad and former chairperson of aerb , says: "At present, aerb is involved in other issues like safety of nuclear reactors. It's interest towards radioactivity in houses has been extremely low. Even experts like me are not fully aware of the issue. "

The government official's reaction to the issue was especially noteworthy. Initially, J Sengupta, chief (building materials), bmptc , refused to acknowledge that pg is radioactive. On being given scientific evidence, he said: "I know pg is radioactive, but that is not the case with Indian pg." On the issue of rock phosphate imports, Sengupta passes the buck to the ministry of environment and forests (mef ) and ministry of chemicals and fertilisers (mcf ).

But both mef and mcf officials plead ignorance on the issue. "Why don't you check the Hazardous Waste (Management & Handling) Rules 1989 rather than asking me?" says Indrani Chandrashekharan, additional director, Hazardous Substance Management Division, mef , New Delhi. The reaction of the mcf official, G B Purohit, was worse. "I am not aware of any stipulation for radioactivity in pg and neither am I aware of a safe limit."

The fertiliser plant officials claim to have got their byproduct tested as and when required, and say that radioactivity in pg is always within the "safe limit". "One of the fertiliser plants got its pg tested by Bhabha Atomic Research Centre (barc) in Mumbai and found radiation levels to be 13.5 pCi/g, well within the international safe limit," says Swaminathan. However, most of the fertiliser plants collect the sample themselves and send it to research institutions for analysis. Thus, there is always room for the plants to purify the samples before getting them tested. When a research institution collects the sample on its own, the results could be very different.

Way back in the 1980s, the Nagpur-based National Environmental Engineering Research Institute (neeri), tested pg samples from two fertiliser plants. The results showed that apart from the high heavy metal concentration, the pg had radioactivity levels of 29 pCi/g. Due to the practice of dumping pg unscientifically, the problem of leaching had also come up and groundwater was contaminated. The Gujarat State Fertiliser Chemicals Ltd (gsfcl) in Baroda has contaminated the groundwater to such an extent that it is neither fit for consumption nor agricultural purpose, according to a gsfcl report.


Phosphogypsum has been listed as a hazardous waste under category 16 of the Hazardous Waste (Management and Handling) Rules 1989 framed by the government of India. But it is still being promoted for use in building construction. As if this was not enough, the government further exempted materials made of pg from excise duty in 1991-92. This means that not only does the construction industry get pg free of cost from fertiliser plants, but it also gets an exemption from excise duty on materials using 25 per cent of pg.

One case is particularly interesting. "A company by the name India Gypsum Ltd of the C K Birla Group in Chennai has agreed to use 25-30 per cent of pg in making gypsum plaster boards and in return has got 100 per cent import duty exemption amounting to several crore rupees on import of certain machinery," says Sengupta.

But why are these double standards being maintained by the government? On the one hand, the product is listed as hazardous waste and, on the other, its use is being promoted throughout the country. "So many issues have come up and died. Earlier, it was uranium, now it is radon. Very soon pg will also become a thing of the past. So why create a hue and cry?" says Swaminathan.

The health hazards of pg use do not seem to be important. When questioned about pg and related health effects, government officials often ask for evidence. "Where is the evidence that pg used by the construction industry can lead to cancer?" questions Purohit. How can we stop or put a ban without having any scientific evidence, he asks. Sengupta echoes his views, "We are asking research institutes like neeri for evidence. What can we do if they are unable to provide it?" He says, regulatory bodies such as aerb claim to be "in the process of looking into the problem".

But Gopalakrishnan believes otherwise. " aerb will wake up only if somebody alerts them. Sometimes, when they become alert, some higher official such as the Prime Minister calls up and tells them not to disturb the equilibrium in the society," he says.

Continuing the policy of passing the buck, Sengupta says: "If mef directs us to stop promoting the use of pg , we will do so without any delay." It is time the government and research institutions get their act together and start looking into the issue of pg before it is too late.