Blood on the beach

Fisherfolk on the coast of Saurashtra kill whale sharks to make a living. If this is replaced by an ecotourism scheme the people and the fish would both be better off

Blood on the beach 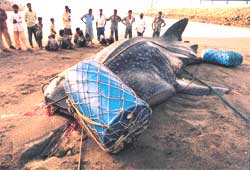 for decades I searched for them in vain. Finally, I found one, but not the way I would have preferred it. Lying on the shore of a coastal Gujarat village, barely alive, was the whale shark ( Rhincodon typus ) I had chased for most of my life. Fisherfolk were busy butchering the leviathan. The thrill of discovery turned into anguish as I stood on the shore and watched the fisherfolk systematically strip the flesh off the fish.

I had gone back to the Gujarat coast to relive a childhood memory. As a 10 year old boy, I was mesmerised by the huge sea creatures that kept alongside my ship as I sailed from Africa to India. The memory of that journey urged me to make a film on these amazing creatures of the Arabian Sea.

Hundreds of whale sharks are being killed along the western coast of India each year. These beasts are the largest of all shark species and are found mostly in warm tropical and subtropical waters.

Many weigh up to 70 tonnes and can be 20 metres long, though most of them measure about 12 to 15 metre. They are greyish brown in colour with white spots that act as camouflage. They are harmless -- feeding only on plankton and small fish.

Not much else is known about this species. Only a few hundred whale sharks have been tagged and monitored. Scientists and marine biologists are very upbeat. Whale shark sighting is considered a rare event around the world.

My team, after searching for almost two years for the elusive fish, reached a small fishing village on the Suarashtra coast. Several whale sharks lay beached. We decided to stay and film the entire operation. The film was conceived even as we watched fisherfolk haul in and cut up a whale shark.
The fisherfolk use crude harpoons and a small fibreglass dinghy to capture this huge fish. The operation begins with the preparation of a crude harpoon to which a long rope is attached. Next, they hire an outboard motor and fix it on the dinghy. Its time for a kill.

About 6 km from the shore, the fisherfolk wait, sometimes for hours. Upon sighting a whale shark they move in for the kill. The first person whose harpoon finds the mark claims the whale shark. The fish, when hit, dives down into the ocean to protect itself. But the fisherfolk preempt the whale shark escaping. At the end of the rope are large, empty, plastic barrels. The buoyancy of the barrels makes it hard for the victim to move down and stay submerged. The helpless fish is left to struggle with the barrel for hours. Exhausted by the exertion, it is forced to rise to the surface. Then, it is hauled in to the shore.

The shark does not consider fisherfolk to be a threat. It is easily caught. The fact that the whale shark is usually found solitary makes it easier.

Once on the shore, the shark is not killed immediately. It is left alive, so as not to decay. Meanwhile the fisherfolk go out to find a buyer. Upon the buyer being identified, the surgery starts. First, the fins are cut off. Then, begins the clinical tearing apart of the huge fish. All through the process, the whale shark is kept alive. Finally, the liver is removed. While the blubber and meat is handed over to the buyer to process for export, the liver is kept by the fisherfolk. It is cut into strips and put into barrels to melt into oil.

The slaughter of the species has not attracted the attention of the Indian authorities and conservationists. The whale shark has been declared a vulnerable species by the World Conservation Union ( iucn ) and is protected in most parts of the world. But not in India.

The issue here is not just the protection of the animal. An alternative livelihood for the local communities of fisherfolk is as necessary. In fact, finding a solution to the latter can automatically lead to a safe Suarashtra coast for whale sharks. The Saurashtra coast offers a big opportunity to promote ecotourism, which can attract Indian and foreign adventure tourists in large numbers. The coastal communities would be able to earn a livelihood without jeopardising the whale shark's future. Facilities and services that can be provided include whale shark sighting tours, scuba diving and under-water filming. The fisherfolk can work as guides and earn a whole lot more by pointing out the whale sharks than by killing them. Their knowledge of the whale shark can be used constructively.

As told by Mike Pandey to Kushal P S Yadav