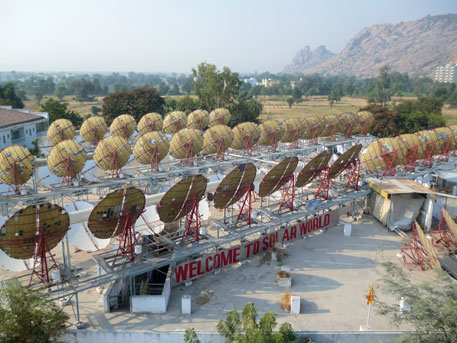 Lunch time is an hour away. Chefs dressed in spotless white are working in tandem to ensure that the food is cooked to perfection. The brightly lit kitchen is filled with an overwhelming aroma of curry leaves in dal and rice being boiled in steam cookers. Spread across 7,000 sq m, the kitchen has over 15 such cookers with capacities of 500-1,000 litres, and many deep pans for cooking vegetables. The food is to be served to an impressive 15,000 diners.

There are bigger kitchens but none that runs on solar energy. Built in 1998, this one is in the headquarters of Brahma Kumaris World Spiritual University (BKWSU) in Shantivan, 18 km from Mount Abu in Rajasthan. Moun Abu is the only hill station of the desert state.

The kitchen, where vegetarian meals for 38,000 people can be cooked at one go, uses solar energy in the form of steam generated on the roof of a building next to the kitchen. The roof is an interesting sight. After climbing stairs of the four-storey building, one is greeted by a wall that says, “Welcome to solar world”. The roof has 84 shining parabolic concentrators, each one looking like a huge dish made of reflecting concave mirrors. The size of every dish is 9.6 sq m and has 520 pieces of special white glass imported from Germany. These dishes are arranged in pairs with one placed higher than the other. A rotating support adjusts the dishes automatically according to the sun’s position so that it can reflect and focus maximum sunlight on receivers. Made of high-grade steel, these receivers are situated three meters from the centre of the concentrators.

A strong beam of reflected sunlight from the concentrators heats up the receiver. The temperature reaches up to 500°C at its focal point. These receivers are attached to pipes running along the row of concentrators. The temperature of the receiver heats the water inside the pipes and steam is generated. This steam travels through insulated pipes to the kitchen. The cooking vessels have perforation at their base to facilitate entry of the steam.

The entire solar installation generates 3.6 tonnes of steam every day which is used for preparing food and drinks. Around 50 kg of rice can be cooked within 12 minutes. “It saves around 200 litres of diesel and 1.2 tonnes of carbon dioxide emissions in a day. The kitchen also saves 184 kg of LPG every day,” says Aneta Loj, research and development coordinator, India One Solar Thermal power project at BKWSU. 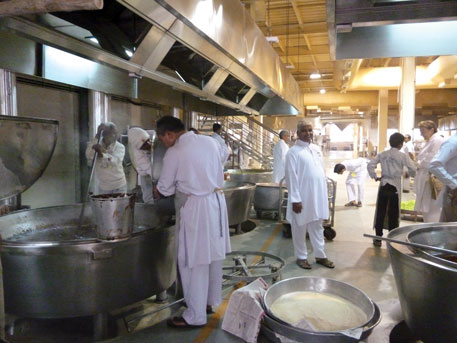 The kitchen and the roof have been designed by Switzerland-based Wolfgang Scheffler, regarded as the father of solar community kitchens, along with BKWSU’s renewable energy department. The university, spread in an area of 30 hectares (ha), has two more campuses in Mount Abu and both use solar energy to cook food. “The university annually gets a million visitors. To cook food, we wanted to reduce our dependence on fossil fuels. This led to the creation of the solar kitchen,” says Loj. At present, the food is being cooked for 17,500 people who are either residing in or visiting the campus. The headquarters can house 25,000 people.

Having taken care of the cooking fuel, BKWSU is planning to fulfil its electricity needs through solar energy. It is building a one MW solar thermal plant on 22 ha using the technology used in the kitchen. Construction of the project, called India One, is under way.

Metal structures painted bright yellow stand on the ground. Pieces of mirrors are being fitted on large parabolic metal structures, each of 60 sq m inside the workshop on the campus. About 260 such concentrators will be required to generate enough steam to power one MW of turbine to generate electricity.

At the centre of every concentrator a camera will be fitted that will monitor whether the focus of sunrays on the receiver is accurate. The receiver, in this case, can heat up to 1,200°C and is integrated inside a heavy iron drum. The hollow of the drum has a spiral of heat-exchanger pipes wherein water will flow. On heating, the water will turn into steam which would be compressed to run the turbine.

A big advantage of this project is that the heat produced can be stored for as long as 16 hours so that it can be used after sunset to generate electricity. The stored heat can be between 250°C to 450°C. “We are using cast iron to store the heat,” informs Loj, adding, “If we combine the storage system, the actual capacity of the plant becomes 3.2 MW.” The idea is to become energy independent as far as possible and reduce the burden on nature, says Golo Pilz, head of India One.

Shedding more light, Loj says the project’s objective is to develop a technology which is suitable for India and can be replicated. The project cost is Rs 25 crore, 60 per cent of which is funded by corporate companies. The rest is jointly borne by the Indian Ministry of New and Renewable Energy and the German government, which is providing the technology. “Promotion of clean energy is one of the guiding principles of the spiritual university in striving for a sustainable future,” concludes Pilz.