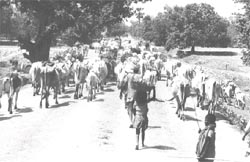 Since India's independence, government policies in at least four crucial areas have had damaging effects:

"Politics is short-term religion. Religion is long-term politics," said the socialist leader Ram Manohar Lohia. This best explains the special status of cattle in Hindu thought. In Hindu belief, gaudaan (giving a cow to a poor person) is considered as important an act as kanyadaan (giving a daughter to the future husband in a marriage ceremony). Critics might say this slights the position of women. However, it does explain the reason for the special status of cattle, particularly cows. Giving a poor person a cow ensured that he/she would survive with dignity. How? Because there were pastures aplenty with a wide variety of grasses. The common grazing areas, called gauchar, had as special a status in land management, as important as the status of cattle.

Atulbhai Shah of Surendranagar has done a lot of research on gauchar. "Traditionally, gauchar has been on degraded land that is not fit for agriculture. The Vadvan Mahajan Panjrapol has 1,300 acres (526 hectares) of gauchar land. Our calculations show that if agriculture is carried out on this land, the annual income will be Rs 91 lakh, and this does not include the costs of inputs. If the same land is left as gauchar, the total annual income would be more than Rs 4 crore only from milk, gobar and wool from the animals who can graze here. It makes good economic and environmental sense to have gauchar," he says.

"We would never go to the vathaan (gauchar) with our shoes on. It was sacred land, more sacred than the fields," says Ibrahimbhai Halepotra, a Muslim Maldhari. Encroaching on gauchar land was a sin. "In fact, people would leave portions in their fields for cattle to graze in. Everything to do with cattle was sacrosanct as the entire economy was built around them," says Bagabhai Patel of Kaanth village. Not any more, and the sword wounds on Patel's head explain it. "I received these when some of us went to protect the gauchar from being usurped by neighbouring farmers. They have political support and the village cannot stand up against them as that would fragment the vote base of the local politicians," he explains.

Destruction of gauchar land has been sponsored by the government. Areas under the revenue department are being diverted to other uses, such as redistribution to the landless. "Land reforms have divided common areas among farmers... Even forestry projects have usurped former grazing lands," observes Holly Brough, research associate with the Worldwatch Institute in Washington, dc, usa, who specialises in poverty, land use and environmental education (see 'The milk that ate the grass'; Down To Earth, Vol 7, No 22; April 15, 1999).

Go and meet Rambhai Ranchodbhai Maali, who cultivates what was formerly the gauchar of Kaanth village. "In 1992, my land in village Utal of Dhanera tehsil came under a dam. We were being given land in a gauchar, but my father said that if we cultivate gauchar land, the generations to come would be ruined. We bought land at another place but the government wanted the black soil from that land for something to do with the dam. We were again thrown out. With no option left, we accepted the government's offer of this land," he says.

"But I feel terrible about encroaching on land meant for animals. It does not rain properly now because there are no forests and livestock is emaciated as there is no fresh grass. This drought has been created," he rues. Breaking of socio-religious codes is rebounding as an environmental disaster, he concludes. But in no other way is breaking away from traditional environmental management rebounding as badly as in the case of agriculture and water (see box: Creating water scarcity).

Problems arising out of the Green Revolution are common knowledge now. Decreasing soil productivity due to overuse of chemical fertiliser is a common phenomenon. But any cut in fertiliser subsidy becomes a major political issue. The government hardly promotes the use of organic gobar manure, both in terms of publicity and research -- it does not create any political interest, which results in the lack of scientific interest in the issue. "There are 27 agricultural universities in India, and they have done practically nothing with regard to draught animal power," points out Ramaswamy.

"The most damaging thing has been the subsidy on tractor and diesel. Why should public money be used to blindly promote unsustainable practices that help only the rich farmers? I can understand that the choice to use a tractor or cattle rests with the farmer. But the least that the government can do is to provide a level-playing field for tractors and cattle. Let the people foot the bill for the tractors, just as they foot the bill for maintaining cattle. I am sure draught animal power will emerge as a more sustainable alternative," says Laxmi Narain Modi, managing trustee of the New Delhi-based non-governmental organisation Bharatiya Cattle Research and Development Foundation. "About 300 million tonnes of fodder can be made available for cattle if it were not simply burnt, as in Punjab, where it causes major air pollution, or diverted to industry or simply allowed to rot."

"In the name of modernisation, government is killing the goose that lays golden eggs," says Shah. "Look at the amount of petroleum and fertiliser we import and the foreign exchange we spend on this. And yet the tax payer's money is being used for subsidies that are actually killing the animals who can cut down this drain on our exchequer." Bharatbhai Kothari, a trader based in Deesa town of Gujarat, who runs the Rajpur-Deesa Panjrapole that shelters about 6,000 animals, says: "What if there is an oil crisis? Sooner or later, the world will run out of petroleum. Then everyone will need these very 'unproductive' animals. It is a matter of national security to preserve them."

The story of livestock becoming 'non-descript' and 'unproductive' also proves that India's main problem is its government, not the people or the livestock. India is home to some of the best breeds, especially bovines, in the world (see p27: India carriers Inc). "The best genetic traits are expressed in the best environment. It is the degradation of environment that is reflected through livestock, rather than livestock destroying the environment. The 1965-1990 period will go down in history as the time of denigration of India's outstanding native breeds," says Prasad of nbagr (see 'Vanishing breeds'; Down To Earth, Vol 6, No 8; September 15, 1997). "Yes, it was the farmers who crossbred their cows in a hurry to make quick money. But who promoted them?" asks Prasad.

"The crossbreeding fiasco is a reflection of our colonial hang-up. We seem blissfully unaware of the genetic wealth of our natural resources," says Nivsarkar. "For the past 40 years, the entire government machinery has been busy drilling in the message that foreign breeds are superior to native breeds. When they lose pride in their animals, people stop caring about maintaining the pedigree."

He is right. Several families of traditional livestock breeders interviewed by Down To Earth didn't even remember the names of the breeds, describing them as "desi" (local). "Words like 'local' and 'non-descript' should be struck out of our livestock terminology. These terms have polluted our minds for way too long," says Batobyal. But his department is mainly responsible for the crossbreeding fiasco. Batobyal acknowledges that instead of upgrading India's poor animals, it has actually polluted the best of native breeds. He says the department is trying to make amends by preserving the native breeds now.

Is it too late? The bullock cart has already become a symbol of lack of development. "One major reason for persistent poverty in India is the neglect of the livestock system," says Ramaswamy. The government has discouraged sustainable systems of economic productivity, branding them 'regressive', whereas unsustainable models have been pushed blindly through subsidies as 'progressive'.

Why is the government doing this? Simple. It is easier for politicians to garner support through quick, populist measures that yield immediate results. Who cares about the long-term effects? So, the answer to water scarcity b ecomes deeper tubewells. "I was amazed that the ruling party of Delhi lost the 1998 assembly elections for something as petty as the rise in prices of onions. Governments have been plundering rural areas in every way possible, and yet there is no reprieve for us. The government is of the urban rich, by the urban rich and for the urban rich," complains Kothari.