As Le Clemenceau bobs on the horizon, reactions in India get sharper, noisier. We've discovered occupational safety. Asbestos is used in popular lingo. The workers at the shipbreaking yards of Alang have suddenly become people. Almost. For the media has realised how Alang is losing business to Bangladesh.

Fact is this decommissioned French warship isn't the first rejected vessel from industrialised countries to beach at Alang. To be torn down by workers who risk their lives to strip the steel to make a living. In 2005, the Danish ferry Riky stirred a similar hype. News channels couldn't get enough of waste coverage when explosions in metal scrap containing live ammunition killed 10 workers on the outskirts of Delhi. After a few blips on the toxic radar, life goes on just the same.

It is this business as usual that is truly bloodcurdling. Because India imports hundreds of tonnes of hazardous waste each year. This includes used syringes, incineration ash of municipal garbage and clinical waste, heavy metals that are known to retard the growth of children, carcinogenic polychlorinated biphenyls. India maintains records of all this. And does nothing to stop it.

Industrialised countries that ship this waste -- recyclable money, really -- to India have signed international treaties to not send hazardous waste to countries that don't have the facilities to handle them safely. A closer look reveals the method behind this madness. How the global shipping industry and rich countries make developoing countries fight over their waste. India refuses to learn from China, which has modernised its shipbreaking industry. India's raring to accept slow poisons. It is also hastening the death of its shipbreaking industry 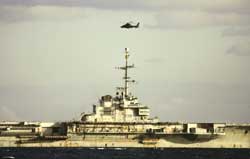 How hazardous is dismantling a decommissioned ship? It does have dangerous substances like asbestos, polychlorinated biphenyls (pcbs) and spent oil. Who should be allowed to engage in shipbreaking? What rules exist to ensure the safety of labour involved in dismantling ships and the environment? A brief recap is essential for clarity.

The 1980s saw a sharp increase in cases of industrialised countries dumping their toxic waste on to developing countries. Though rich countries have better facilities to handle dangerous substances in an "environmentally sound manner", it is far cheaper to dump these in developing countries where regulation and monitoring is almost non-existent. In 1989 was signed the most important international treaty to regulate the global waste trade: the Basel Convention on the Control of Transboundary Movements of Hazardous Wastes and their Disposal. It was amended in 1997 to bring in what's called the Basel Ban. This prohibits all movement of hazardous waste from industrialised countries (forming the Organisation for Economic Cooperation and Development, or oecd) to developing (hence, non- oecd) countries.


In its article 1, the Basel Convention defines waste that should be considered hazardous; a list of items defines waste in Annex I; the characteristics that make the waste hazardous are spelt out in Annex III. Putting all these together, decommissioned ships are hazardous waste -- unless they are completely decontaminated, which means stripped and cleaned of virtually everything, leaving only the steel structure to be sent for dismantling.

So Le Clemenceau or the Danish ship Riky would be considered waste. Under the convention, as well as the European Union's laws, these ships cannot be exported for disposal without decontamination.

But the shipbreaking industry argues a vessel can't be regarded a 'ship' and 'waste' at the same time. The Basel Convention's 2004 conference decided that a vessel can be categorised as waste under Basel and simultaneously be regarded a ship under other international rules.

The pitch is further queered by another United Nations body: the International Maritime Organisation (imo) based in London. It regulates global shipping business. imo insists waste from ships is within its jurisdiction. A bulk of imo funding comes from countries that have registered a large number of ships. This, rue environmentalists, results in imo decisions getting dictated by the industry.