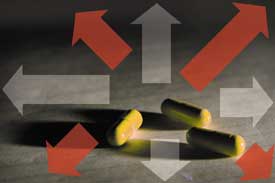 Have an upset stomach? The usual course for many would be self-medication -- buy a ciprofloxacin dose (or any broad-spectrum drug) from the chemists, or just ask the chemist for a prescription.

What makes this random medication possible? The pharmaceutical industry has got a wide-range of doctors and pharmacists extolling the efficacy of broad-spectrum antibiotics -- and the message has filtered down to the end user. Even severe diseases like typhoid, food poisoning and cholera are now treated with any antibiotic available in the market. The major culprit, as always, is the government, which has failed to regulate the market.

Antibiotics are drugs that kill bacteria or slow their growth. An antibiotic usually works on specific groups of microbes, differentiated as gram-negative and gram-positive. They have different cell-wall structures, which can be treated with specific antibiotics.Antibiotics work in three major ways -- some like penicillin affect biosynthetic activity and prevent cell wall formation; tetracyclines affect protein synthesis; and the quinolone group works on the replication of genetic material.

Penicillins like benzylpenicillin, used to treat diseases like pneumonia, have a narrow-spectrum of activity. Companies modified the chemical and came up with semi-synthetic products like amoxycillin and ampicillin that have a broader-spectrum of activity.
Antibiotics were improved in several stages. The first generation antibiotics had a narrow spectrum, while the second, third and fourth generation antibiotics have been equipped against more.

The pharmaceutical industry claims that all diseases can be treated with antibiotics. In India, fixed-dose combinations, like a mix of an anti-bacterial like ciprofloxacin and an anti-amoebic like tinidazole, have become very popular and are being used for all bacterial, viral or amoebic diarrhoea. But 90 per cent of the diarrhoea cases in the country are due to virus and do not need medication. Nine per cent cases are due to either bacteria or amoeba requiring either an anti-bacterial or an anti-amoebic and the remaining one per cent can be attributed to a mix of bacteria and amoeba that requires a combination of drugs. But combination drugs are being used to treat all diarrhoea cases in the country. The fact that the cost turns out to be higher for patients, who also have to suffer from side-effects, seems immaterial. These drug combinations are available only in India due to the country's lax regulations. 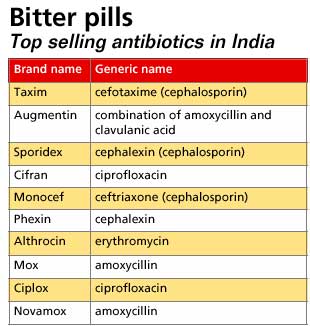 The use of drug combinations has also resulted in making microbes resistant to antibiotics. The first bacterium to show resistance was Staphylococcus aureus, which causes pneumonia. It became resistant to penicillin within four years of its use by altering its cell wall. Haphazard use of antibiotics makes the bacteria resistant to it. Thus, many prescribed antibiotics often fail. In the us, this adds about us $100 to us $200 million to health care costs.

In such circumstances, it is obvious that antibiotics need to be used judiciously, that is, be targeted against specific microbes. This requires good diagnostic facilities to identify the pathogen that causes a disease, but India lacks the infrastructure to do it.

A study carried out in south India shows that more than 50 per cent of doctors gave patient satisfaction, time pressure and treatment uncertainty as reasons for prescribing a broad-spectrum antibiotic. But pharmaceutical companies' aggressive marketing strategy is obvious with the global revenue from antibiotics in 2009 estimated to be around us $31billion.