Government promises land to the homeless in its draft Homestead Bill, but where’s the land? 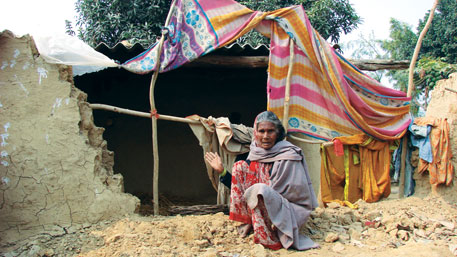 The government may soon be scrambling to search for millions of hectares (ha) that the UPA regime has promised to the rural homeless in what could be its biggest bait before the general elections.

In the third week of March, a task force chaired by Union Rural Development Minister Jairam Ramesh, circulated the draft National Rights to Homestead Bill in the ministry for approval. The bill intends to complete the abandoned land reforms and promises 10 cents, or 0.04 ha, to the rural homeless within 10 years of notification of the law. The land will come largely from surplus government land accumulated from land ceiling laws, Bhoodan land and wasteland.

In October 2012, landless people, led by P V Rajagopal of Delhi-based non-profit Ekta Parishad, had launched a big rally from Gwalior, demanding land rights and threatening to invade Delhi. The rally was called off in Agra after Ramesh promised a law on right to homestead.

The draft bill stipulates that within a year of its enactment each state will prepare a plan to identify the homeless, and an inventory of the land available. If there is not enough, state governments will have to acquire land.

But given the state of land reforms in the country, the new law will end up being a mere land purchase scheme, says former Planning Commission member B N Yugandhar. “It is a joke to give 10 cents without regularising and legalising the present homesteads,” he says.

S M Vijayanand, additional secretary in Union Rural Development Ministry, counters, “Right to homestead will be a landmark in poverty reduction. The cost of the programme—Rs 2 lakh crore—is not too difficult to meet.”

On paper, government does not face land crunch. According to the Planning Commission, there are eight million people without a dwelling unit. To fulfil the 10 cents promise, the government will need 323,749 ha.

According to the National Land Reforms Council (NLRC), created in 2008 to form the policy, state governments already have 0.4 million ha surplus land (see ‘Perfect on paper’). However, given little progress in land reforms since early 1970s, there is no certainty on the availability of the land and its possession status. Last year, Ramesh had admitted, “Two million ha have been pledged as part of the Bhoodan movement over the last 60 years. Only 50 per cent has actually been distributed…This is a land scam without any parallel.”

When the bill is enacted, most state governments will have to dust off land records after decades. “Every state has a land use planning board chaired by its chief minister. But they are defunct,” says a member of Land Reforms Committee, under NLRC, who did not want to be named.

Except Karnataka, no state has a land use policy, crucial for implementing land reforms. Karnataka, Andhra Pradesh, Odisha, Bihar and West Bengal are trying to implement land distribution programmes similar to the one proposed by the Centre. Their experience in finding surplus land has resulted in litigations and conflicts. According to NLRC report State Agrarian Relations and the Unfinished Task in Land Reforms, state governments have together declared 2.7 million ha surplus land under the ceiling laws. Of the total declared land, only 2.3 million ha is under possession of state governments. Of this, 1.9 million ha has been distributed.

“We have plenty of land but taking possession of them is difficult,” says Yugandhar. According to a report by non-profit Society for Promotion of Wastelands Development (SPWD), the Rajasthan government set aside 0.68 million ha wasteland for bio-fuel plantation. But only 41,120 ha could be physically identified. Of the total identified land, it could take possession of only 12,850 ha.

“There is a huge difference in what is shown on paper and what is in government’s possession,” says Viren Lobo, director, SPWD. “Government should not fix the quantum of land at 10 cents as it will create administrative problems. Every state does not have surplus land consonant with the number of landless,” says Bina Agrawal, a non-official member of NLRC.

A few decades ago, state governments had enough surplus land besides the land bank which was created due to land reforms. But the bank is rapidly shrinking. There is an alarming demand for land for industrial-mining-infrastructure.

A study by SPWD shows that by 2026, India would need 11.4 million ha additional land. “The proposed entitlement would be like yet another government scheme for purchasing land. Every year, the Centre would allocate budget for this programme,” says Siva Ramkrishna, director of Sakti, a Hyderabad-based non-profit working on conservation of natural resources.

Already on the job

“Kerala implemented land reforms in early 1970s, so it will find implementing the new law difficult,” says T R Raghunandan, former joint secretary in the Central panchayati raj ministry. Former Kerala finance minister Thomas Issac of the opposition CPI (M), welcomes the bill but says, “Kerala is a land-scarce state. If the bill is implemented, people will have to move to other places.”

Andhra Pradesh has been distributing land to the landless through self-help groups since 2010. The state’s housing minister refuses to comment on the draft, but urban development minister Mahadheer Reddy M says, “The state government is in a dilemma as we are already running a programme of providing land to the landless.” Odisha, too, has been providing land to the homeless under its Vasundhara scheme since 2006. State revenue minister Surya Narayan Patro is angry with the Centre for not consulting the states while drafting the bill. “Land is a state subject. States must have been consulted during the drafting process. It cannot be implemented without the support of the states,” he says.

The election-bound Karnataka proposes to give 12 cents to the landless under its My Land, My Garden Scheme on the basis of lists prepared by gram panchayats. “We are providing land as per availability. We were not consulted during the drafting of this bill. Centre seems to be interfering in a state subject,” says Karnataka housing minister V Somanna.

The Bihar government has been giving three cents to Dalits for construction of dwellings since 2009. The scheme has now been extended to the extremely backward castes. State land revenue minister Ramai Ram says, “We would like to extend our homestead programme to other sections if the Centre supports us financially. But it should not put a cap on the number of homeless.”