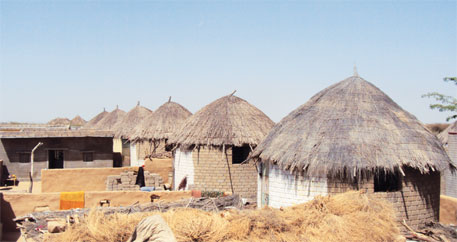 It is a chilly December evening in Barmer. The average minimum temperature has dropped to 5° Celsius in this sandy district of western Rajasthan, which borders Pakistan. But thanks to his house, Dayam Khan, a Manganiyar, one of Rajasthan’s many communities of traditional musicians, does not need an electric heater or a stove to keep his family warm. His house is designed in a way that it stays warm in winters and cold in summers. In fact, the architecture of each of the 65 houses in New Kotra, a village 60 km from Barmer city, helps people cope with heat or cold and extreme weather events such as floods and earthquakes.

New Kotra, as the name suggests, is not very old. It was established in 2006 after unexpected floods washed away many villages in Barmer. One of these was Jalela, where Manganiyars used to live. “Floods took away my three-year-old son and house with all the belongings,” says Jamuna Devi of the neighbouring Sheo village. She claims to have stayed in a temple with her husband for a fortnight after the floods. As the water receded, temporary shelters were constructed. “But we were living with the constant fear of a similar tragedy. We had no security,” says Jamuna. According to official records, the area received 577 mm rainfall in just three days in 2006. It was 300 mm higher than usual rainfall for the season. As many as 103 people died, 95 per cent people were rendered homeless in five most affected villages including Jalela.

“The poor families had become even more vulnerable after losing their houses in the flood. We decided to build houses which can help families withstand changing climate,” says Shivangi Chavda, chief operating officer at SEEDS. The non-profit, with the help of district administration, constructed 300 houses in 15 most affected villages. As part of the project, Manganiyars were resettled at New Kotra, where the district administration provided land. The project, titled Barmer Ashray Yojna, was funded by London based non-profit Christian Aid and European Community Humanitarian Office, a donor agency.

The houses that were built after the catastrophic 2006 floods are cylindrical. “The shape helps in distribution of force of water in case of floods and earthquakes. In square and rectangular structures, stress builds up at the corners,” says Mihir Joshi, senior manager and engineer with SEEDS. Cylindrical shape allows water to flow along the circumference of the houses without damaging the structures, he adds SEEDS used locally available resources to build houses. The bricks are made of 60 to 70 per cent local clay, five per cent cement and 20 to 25 per cent silt. The houses remain cool in summers and warm in winters due to these special bricks which have large pores and are laid in a way that horizontal spaces are left between two adjacent bricks. This gives a cooling effect. These bricks have high thermal resistance, meaning heat takes more time to transfer from outside to inside the house. Further, the houses have thatched roofs of bamboo, millets stems and locally available grass, saniya. The insulating effect of the roof prevents heat from entering the house in summers and traps heat inside the house in winters. 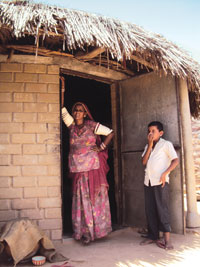 The bricks were made on site with the help of local masons and communities. To give strength to the houses, the bricks are designed in such a way that they can be interlocked with each other rather than just being on top of each other. The foundation of the houses is also four feet deep, which adds strength. “We provided continuous bands around the windows, the weakest area in a house, to give more strength to the structure to withstand earthquakes,” says Joshi. Barmer falls in seismic zone IV. The cost of one house was around Rs 42,000.

Another interesting change made in the design of the houses is the opening of the door. Traditionally, doors of the houses in the area open inwards which obstruct emergency exits during natural calamities. Therefore, in new houses the doors open outside. Community empowerment and participation played a big role in rebuilding the houses. Village development committees were formed and involved in the project. The residents were made stakeholders at every level of decision-making. “All decisions were finalised after consulting the village committees,” says Chavda. Local masons such as Rewat Singh of Sheo village were trained by SEEDS engineers in designing new houses. “Most families worked as labour to build their houses. Women were at the forefront in the initiative,” says Singh.

SEEDS also worked on rebuilding water harvesting structures which were destroyed in the floods. It constructed cemented underground wells, tankas, to collect rainwater. The average size of a tanka is 3X3.6 metres, which can hold 32,000 litres of water.

Rajasthan State Action Plan on Climate Change estimates the mean annual rainfall would decrease slightly, but extreme rainfall (more than 244.5 mm rainfall in a day) is expected to increase in frequency and intensity in the model projections for 2071-2100. Observational records also show that for over 100 years, the probability of severe and very severe droughts is high over the western Rajasthan. And the average temperature in Rajasthan is projected to rise by 2035 in the range of 1.8° Celsius to 2.1° Celsius. The model runs indicate that minimum temperature rise will be much more than the maximum temperature rise in Rajasthan.

According to Joshi, the houses can help communities adapt to changing climate. People agree. “If we had such houses when the floods struck, the damage could have been less,” says Khan. It was unbearable to live in the earlier homes during summers as most of the villages do not get electricity, says Mani Ram, another Manganiyar. People in Barmer say they have noticed changes in the rainfall pattern and heat. “While there was no or little rainfall in Barmer a decade ago, rainfall has certainly increased over the past six to seven years,” says Bhoop Singh, who is in his late sixties. However, the duration of rainfall is gradually reducing. Instead of four month, rains fall only in two months. It has also become unseasonal, Ram adds.

The official data of Rajasthan Meteorological Department substantiates the observations. It shows an upward trend in rainfall in the last 10 years. Similarly, the temperature data is also showing an upward trend in Barmer district of Rajasthan. “Both the duration and the intensity of heat has increased in Barmer,” says Amarti Devi, one of the beneficiaries of the new house in Sheo village.

However, only a few families have built similar houses with their own investment after the SEEDS project was completed in May 2007. Most of the new houses in the villages use concrete and gravel. “These houses are easy to build. Today, everybody aspires to live in modern houses with marble flooring, glasses and cement,” says Rewat Singh. Modern architeture looks good, says Durgesh Singh in Sheo village, who is getting his three-room house renovated. “But people do not realise these houses have poor conductivity. And, to cut cost most people do not pay attention to strong foundation leaving them prone to extreme weather events,” says Rewat Singh.

People partly blame SEEDS for not promoting the houses enough in the area. They say the non-profit “did not return after constructing sustainable housing to popularise the architecture”, a claim the non-profit refutes. “Our job is to demonstrate new technologies using local resources and train people in disaster affected regions. It is for the trained communities to take the initiative forward because sometimes it is difficult for us to keep monitoring the project because of lack of resources,” says Chavda.