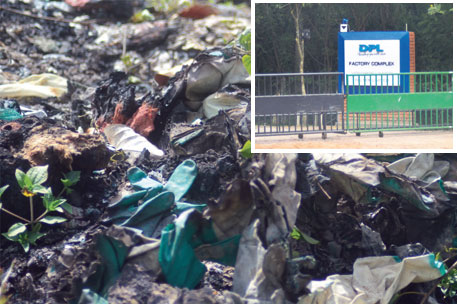 I happened to visit Weliweriya just a fortnight after a bloody protest there against a rubber glove factory. On August 1, the army opened fire on some 5,000 people from 18 villages gathered at this picturesque village in Sri Lanka’s Western Province to protest Dipped Products PLC, and demand clean drinking water. The winding road to Weliweriya, with trees on one side and fields and houses on the other, hardly resembled the war zone newspapers had claimed, but an eerie silence enveloped the atmosphere. My taxi driver stopped in front of a bus stop, which was adorned with posters paying tribute to three young men who died when the army opened fire at the protestors.

My Sri Lankan friends accompanying me informed that Dipped Products’ factory is located further down the road at Rathupaswala village. It spreads over 26 hectares and is owned by Hayleys Group, one of the largest tea and rubber producers in Sri Lanka that accounts for more than three per cent of the country’s export income. Though the Central Environmental Authority (CEA) gave it clearance in 1994 on the condition that the company would treat its waste before disposing it of, Dipped Products burns or dumps its toxic sludge in the open. This has contaminated water sources, including groundwater, of villages in Gampaha district, they alleged.

Anger against Dipped Products was palpable among the residents of Weliweriya and Rathupaswala. My casual inquiry about the alleged pollution by Dipped Products spurred an immediate reaction from them. To show me evidence of the factory’s wrongdoing, they led me to a clearing and vanished behind trees. My taxi driver warned me not to open my mouth to anyone about visiting the place till I leave Sri Lanka. They emerged within a few minutes, claiming that they have spotted the area I am to see. As I stepped onto the foliage my foot sunk into the ground. I stared at faces around me that gave me knowing smiles. This is allegedly one of the seven sites where Dipped Products dumped its waste after burning it. I could see ash deliberately mixed with leaves. On a closer inspection, I saw remnants of green and white gloves, and spotted discarded chemical containers and bags. With my feet sinking into the waste, I walked around the site till my ears caught the noise of gushing water. They showed me a river flowing next to the site. The river Aththanagalu is a major source of water for the district. 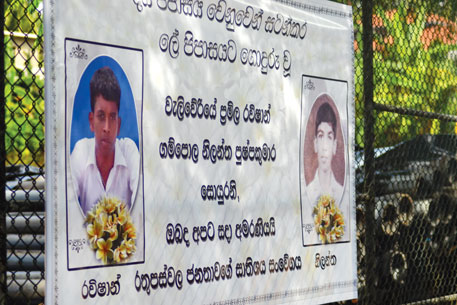 The residents showed me more evidence of Dipped Products’ wrongdoing. They claimed that almost all wells in Weliweriya and adjacent villages yield highly acidic water. “The pH level of my well is four. That of my neighbour’s well is two,” said a resident who did not wish to reveal his name. “No one can drink such highly acidic water.” In Sri Lanka, the pH standard of drinking water is between 6.5 and 9. Some alleged that the level of nitrate in their wells is very high. High levels of nitrate can prove fatal for children. The residents had laboratory reports to back their claims. They have been testing waters since 1995, when they observed increasing cases of skin diseases, allergies and rashes.

Following the protest, Dipped Products issued a press statement saying, “This is a misconception that the factory is polluting water in the area.” It also claimed that there is naturally occurring acidic water in the area. But its claims seem unconvincing given that most wells in the region are 75 years old and people had survived on the water before the factory was set up.

On my way to Kandy, I spoke to an activist who was involved in the protest. Hemantha Withange of the non-profit Centre for Environmental Justice, said that the government is yet to conduct a comprehensive study of water quality in the area, though a study by the water resources ministry in the late 1990s found the average pH of water in Gampaha as 5.5. District public health inspectors have also been asking the residents not to use well water for any purpose, but they never made any arrangement for clean drinking water, Withange informed.

A few media reports I came across cited tests by the National Water Supply and Drainage Board in June this year, which pegg the pH of water in Gampaha at 4.5 (highly acidic) and say it is not suitable for consumption. A study by the country’s premier Industrial Technology Institute shows high levels of acidity in water samples collected from within one kilometre radius of the factory. The study, however, said that the exact reason for such high level of acidity “cannot be ascertained at present”.

Withange blamed the government for the prevailing situation in Gampaha. “Else, why would a protest demanding clean drinking water turn into a bloodbath?” he asked. I recalled an eyewitness from Rathupaswala saying that the protesters turned rowdy only after some politically motivated elements joined the gathering, and that prompted the army to use firearms.

Soon after the fateful incident, the defence ministry issued a communiqué clarifying that the army was present at the venue to help the police manage the crowd. It states that the army is “empowered to take appropriate action in a riot situation”. Media reports say the country’s crime detection bureau is investigating the deaths and four army officers have been relieved from duties to facilitate the inquiry. Amid the debate about who ordered the firing, it seems the reason behind the protest has taken a backseat.

People in Gampaha have been opposing the factory for almost two decades. “We wrote to different authorities not to allow the factory when we heard that the project was earlier rejected by the French government,” says a resident of Weliweriya. “But the government did not pay heed to our plea.”

In October 1997, residents approached the Gampaha district magistrate court complaining that the factory is polluting their paddy fields. Dipped Products used to dump the sludge and ash in farms saying it works as fertiliser, they alleged. The court asked the district medical officer, department of agrarian services, Rubber Institute of Sri Lanka (RISL) and pradeshiya sabha (local government) of Gampaha to conduct a scrutiny.

“The medical officer’s report stated that Dipped Products is involved in some suspicious activities,” informed a resident of Rathupaswala. The report by RISL brought out inadequacies in the effluent treatment system at the factory and suggested upgradation. However, it stated that the effluents “might not be sent to adjoining properties” to avoid further complaints from the neighbourhood. Rathupaswala residents alleged that though the medical officer and RISL submitted their reports to the court within a month, the case was never scheduled for further hearing.

“As the company continued its operations, we kept complaining to different authorities, including the President’s secretariat, various ministers, director of CEA and Board of Investment, but to no avail,” informs the resident. They moved the court again in 2005, but nothing came out of it. Gampaha residents are hopeful that this time round their protest would force the government to act. They are right. Following the incidente, President Mahinda Rajapaksa directed that the factory be relocated to investment promotion zone by April 30. The government has stationed water tanks at intervals of a few metres across Gampaha for providing drinking water.

On my way back to Colombo I met Therippahe Siridamma, a Buddhist monk from Weliweriya, who staged hunger strike for four days, extending his support to people’s demand. “I had never thought that demanding clean drinking water would take people’s lives. Such unfortunate situation should not be repeated in future,” he said.