Bullock cart in its new avatar

Ideal for carrying agricultural produce and transport in rural areas

Bullock cart in its new avatar 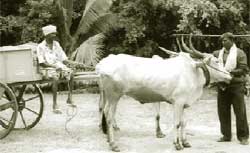 The design of the ubiquitous bullock cart has been modified to make it into a profitable enterprise by overcoming its main drawback -- the inability to work under slushy conditions and undulating terrain of rural areas. It is hoped introduction of rubberised steel wheels with a few other modifications will make the carts more efficient not only in carrying agricultural produce but also as a means of commercial transport.

Four such experimental lightweight carts are being run since 2002 in rural Karnataka. Nagesh Kotegere from Allalasandra, Tumkur district, who is using one of the new carts, is satisfied with its performance in its twin roles. Six such carts were designed by the Centre for Action Research and Technology for Man Animal and Nature ( cartman) under a two-year project begun in April 2001 and funded by the Indian Council of Agricultural Research. Two of these prototypes have been retained by cartman.

India has an estimated 14 million bullock carts out of which 13 million are traditional -- they have wooden wheels -- and one million are improved -- they have pneumatic tyres. The rubberised steel wheel cart, made by fitting discarded tyres around steel wheels, is an attempt to combine the best features of both, points out T N K Kurup, chief project coordinator, cartman. Its axles are made of steel and have low friction bearings for free movement. The pull beam is made from steel pipes and the body is made of light steel sections. "When we introduced it in Konapura, it had just rained heavily and was the only cart to work," says Kurup.

With improved carts, it is believed carting incomes can go up in rural and urban areas. "The potential of these modern carts is staggering," says cartman director N Ramaswamy. "They could be used for carting to factories, seasonal vegetables (in towns and cities), and even given to the landless to earn some money," says Ramaswamy. In Tamil Nadu, a large number of four-wheel cattle-driven carts are taken away from the farm to do professional carting, he points out.

cartman introduced the modified carts in Karnataka after studying the socio-economic condition and the draught situation prevailing in some of its districts. Besides Allalasandra in Tumkur district, the carts are being used in Murudi and Konapura in Chitradurga district, and Arebannimangala, a district in urban Bangalore.

Bullock carts account for 56 per cent of transport of goods and personnel in the country. Also, over 80 per cent of farm produce is transported in animal-drawn carts. But considering that India has about 80 million draught animals, which are used for only 100 days a year, the potential for growth is huge. These animals can be utilised for another 200 days in carts.

A wooden cart costs Rs 10,000 in the state. "With tractors still being out of reach for most farmers, oil prices shooting up and 80 per cent of farming done on small and marginal holdings -- modernising carts is the answer," says Ramaswamy.

The rubberised cart is intended to be a standardised cart that can be fitted locally. But as of now, just one manufacturer, in Bellary, makes these carts and that too, with modifications of his own. A hurdle in popularising the new carts is the cost, which is unaffordable for many farmers. With steel prices going up, the cart that initially cost cartman Rs 12,000, is today around Rs 14,000 -- the same price as a cart with pneumatic tyres. "There are farmers who want the cart but would require some monetary assistance. Government should be able to give carts through lease basis or various schemes. And banks prepared to lend for modern bullock carts," says Ramaswamy.