Laid-off tea workers fall back on forests in West Bengal 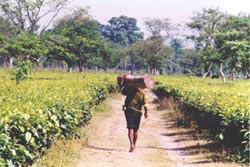 Bharat Bhugel mopped his brow at 4.30 am on a chilly day in January 2003. Under the cover of darkness, he and three others had chopped down a huge sal tree inside the Mahananda Wildlife Sanctuary in the foothills of Darjeeling in West Bengal. Bhugel has been carrying out such clandestine operations at the behest of the forest mafia ever since he was rendered jobless due to the closure of the adjoining Sepoydhura Tea Estate towards the end of 2002. His is not an isolated case. There are at least 700 more retrenched labourers from the same estate. Worse still, Sepoydhura is just the tip of the iceberg.

At the last count 35 tea gardens out of 257 in the northern part of the state had shut shop, leaving upwards of 70,000 workers solely dependent on forestland for their livelihood. With environmental and socio-economic crises looming large over the region, the Union government set up a high-level Tea Expert Committee to formulate an action plan. The panel submitted its interim report to the Tea Board of India in early May 2003.

In the meantime, nearly 1,000 people have succumbed to poverty and water-borne diseases in the region. According to Stephen Toppo, a local tribal, Kathalguri Tea Estate alone has witnessed 80 deaths, including those of 28 children, in the past eight months.

The origin of the problem can be traced back to the year 2000, when tea estates found themselves in the red in the face of India's dwindling global market share of the product. Owners of tea gardens panicked, declaring lockouts, closing down businesses and simply abandoning estates.

D Chakravorty, secretary general of the Consultative Committee of Plantation Associations -- the apex body of the country's tea, coffee and rubber plantation owners -- attributes the trend to stiff competition from other Asian players and disintegration of the Union of Soviet Socialist Republics (ussr), which was a bulk buyer. "The labour unions' constant demand for additional benefits has further aggravated the trouble," he claims.

But S N Chatterjee, former director of the Tea Development Corporation of West Bengal, believes that plantation owners have only themselves to blame. Lately a number of them have adopted unfair practices like blending tea wastes with the product to make a fast buck, he alleges. Tea garden owners have also been held responsible for igniting labour unrest. C Dey, convener of the Tea Workers Unions' Coordination Committee, asserts that they deprived labourers of legitimate benefits and went on a downsizing spree.

According to Samir Roy, a member of the tea board and general secretary of the Hind Mazdoor Sabha in the state, land was leased to entrepreneurs for a pittance when tea plantations began cropping up in India. "But the value of these estates has appreciated several times over, making land-use change a viable proposition," he points out.

Sadly, the workers have to bear the brunt of such decisions since the tea industry is labour-intensive. Chief conservator of forests (north Bengal) M N Majhi explains their predicament: "Pushed to the brink, these labourers have begun depending on forest belts abutting tea gardens. Consequently, timber mafias active in the region are exploiting their knowledge base to mint money by destroying forests."

During the mid-19th century, tea gardens were mainly developed on forestland in remote areas. In north Bengal, almost all the tea gardens are located in the Himalayan foothills and can be divided into three zones: Darjeeling in the extreme north, Terai to the west of Teesta river and Dooars, sited further south. The length of the highly serrated boundary that tea gardens share with forests is more than 1,900 kilometres. "There won't be any forest cover left after a decade if the present rate of depredation continues," concedes a forest department official.

Meanwhile, the expert panel's report will be discussed in detail and may even be fine-tuned during the tea board's meeting in Kerala soon. "The committee has chalked out techno-economic viability and bankable revival proposals for the gardens, and assessed the present managements' ability to implement these," discloses Roy.

Earlier, on November 25, 2002, and March 26, 2003, state labour minister Mohammed Amin met tea estate owners, workers' unions, traders and administrators setting deadlines for reopening all gardens. Though a few estates did start functioning after coercing labour unions to accept stringent terms, many others did not adhere to the time-schedule. Despite this, the latter got away scot-free. Clearly, Bhugel and thousands of other labourers are not out of the woods yet.