A study in pure negligence 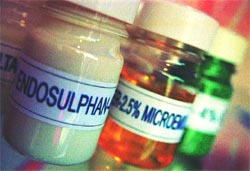 Two legislations regulate pesticides in India -- the Insecticide Act, 1968 (IA) under the Union ministry of agriculture; and the Prevention of Food Adulteration Act, 1954 (PFA), under the Union ministry of health and family welfare. The former's provisions are enforced by the Central Insecticide Board (CIB) and Registration Committee (RC). The over 25-member strong CIB, headed by the Director General of Health Services, meets once in six months to advise on matters related to administering the insecticide act.

The RC is headed by the agriculture commissioner and meets once every month to register pesticides for use in India and for export. This it is supposed to do so after satisfying itself about a pesticide's efficacy and safety to human beings, animals and environment; relevant data to this end are collected from companies. But -- and this is where its regulatory teeth begin to fall off -- they do not fix ADI of a pesticide to be registered, nor set MRLs on food commodities. In global practices, the agency registering the pesticide establishes ADI, sets MRLs and then ensures cumulative exposure is within the safety levels. In stark contrast in India, a pesticide is registered without any of these mandatory safety regulations.

In 2003, an effort was made to ensure that registration of a pesticide by the CIB would simultaneously require that the ministry of health fixed the MRL for that pesticide on different food. But after some discussion, the registration committee of CIB decided that the "fixation of MRL subsequent to supply to requisite data is a separate issue and linking this with registration will unnecessary delay registration." Clearly, the government wanted to quickly introduce pesticide -- a 'development' imperative -- rather than worrying about public health.

Moreover, the way in which MRLs are set under PFA further undermines safety. MRLs are set on the basis of recommendations made by the Pesticide Residues Sub-Committee of the Central Committee of Food Standards (CCFS), Union ministry of health. The CCFS meets once or twice a year, and standards are set on the basis of information supplied by government research institutions and companies. But nowhere in this tedious process does ADI come into play, again in stark contrast to global practice.

PFA is oblivious of ADI. The CCFS has no mandate to establish it. Thus, when CCFS develops MRLs, it never cross-checks exposure levels against ADI. In other words, the legal standards for pesticides in food commodities have no safety considerations built into them. Even if these products meet the MRLs there is no guarantee of safety, for there is no way to find the safety threshold in the absence of ADI.


Worse still, there is no communication between the two sets of nodal regulatory agencies created under IA and PFA. There is a gross mismatch between the pesticides the CIB recommends for use on a food commodity, and those for which MRLs have been set under PFA for the same commodity.

This leads to a bizarre situation. A farmer is 'recommended' a pesticide for a crop, and uses it for that crop. In so doing, he follows the law as laid down under IA. But suppose there is no MRL for that pesticide under PFA. This means the crop cannot legally contain any pesticide residue. Now, if this farmer's crop shows residues of the 'recommended' pesticide, he would be violating PFA provisions. One way or the other, he has committed an illegality.


In India, meaningless standards leads directly to toothless enforcement. The latter is the responsibility of state governments. In states, food inspectors are appointed. They are supposed to keep proper track of pesticide residues in food commodities. To this end, they send samples to state-run laboratories. 70 such laboratories exist. But so does rampant contamination in all kinds of food.

From time to time, these laboratories may find contamination. But they cannot act on it. In such cases, samples have to be sent to the Central Food Laboratories established under the PFA. Four such laboratories exist to verify whether contamination exists or not. This process is so tedious that enforcing standards are almost non-existent.


Pesticide residue are monitored by the All India Coordinated Research Project on Pesticide Residues (AICRPPR) under the Indian Agricultural Research Institute (IARI). But its mandate is to research research; it cannot enforce standards. Nothing indicates its helplessness better than a survey it did on branded baby food and milk. The products were highly contaminated (see table below: No action taken so far); but all the AICRPPR did was to smugly proclaim it could merely publish the report. Till today, no action has been taken. There are still no pesticide residue standards for these products under PFA. The report's publication was also an exception; usually, AICRPPR residue monitoring data is treated as a national secret, and kept tightly under wraps.

In sum, the regulatory framework for pesticides in the country has nothing to do with human safety or food safety. The standard-setting agencies are completely cross-eyed. The regulating agency supposed to enforce MRLs does not monitor residues. The monitoring agency that watches out for contamination cannot regulate the poisonous presence of pesticides in food.

Is this merely a classic case of non-accountability? Isn't this pure criminal negligence?