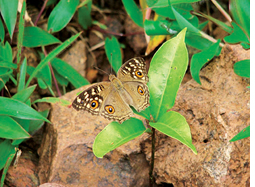 Butterflies in the Andaman archipelago have been facing colonisation. The carrier of the colonists was the 2004 tsunami which brought three foreign species of butterflies to the islands, threatening its fragile ecology.

Of the three species, two, Danias melanipus camorta and Anitilope anomala, are endemic subspecies from the Nicobar group of islands and the third, Precis lemonias lemonias, is from Myanmar.

The new species are said to have triggered a struggle between themselves and the resident butterflies. Experts say that the accidental visitors are fast superseding the local butterflies."Some butterflies might have reached the islands in pupa stage," says T C Khatri, expert on butterflies and the head of Andaman's jnrm college in Port Blair.
The new species share the food habits of the local butterflies. Dominating them, the new entrants prey on the share of food of the natives, resulting in a shortage of food for the latter. As a result, the weak species get pushed back to remote areas. Experts say that if this continues for long they will soon become extinct.

Butterflies are inevitable links in the food chain (see box Natural role) and experts say that extinction of a species may lead to the extinction of at least 20 other species. Preliminary studies conducted in the region show an alarming increase in the exotic butterflies. There is less significant data on the strength and characters of the new species. "The new species have come with new diseases. This needs to be thoroughly studied and necessary steps be taken," says Subhasis Ray of Healthy Environment and Less Pollution, an ngo based in the Andamans. There has been significant loss of habitat of butterflies in many islands in the archipelago after the tsunami. Experts point to the need for an extensive survey to appraise the present situation. After the extensive survey conducted by the British commissioner Michael Lloyd Ferrar (1931) there has hardly been any serious attempt to study the butterflies in Andaman.
The administration in Andaman is clueless about this environmental impact. "We don't have any report on this. These species might have been here for long, but would have been spotted now," says S S Choudhuri, principal chief conservator of forests. Some experts say that such colonisation and extinction are natural. Soubadra Devy of the Ashoka Trust for Research in Ecology and the Environment in Bangalore says the current situation may not be ecologically disastrous. Environmentalists in Andaman, however, demand a comprehensive study on the impacts of the tsunami on flora and fauna of the islands.