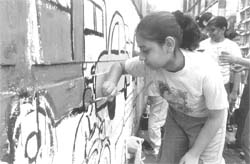 The latest available air quality data for December 1998 to March 1999, provided by the state environment ministry to Down to Earth, shows that levels of rspm, nox and ozone have reached dangerous levels in the city's ambient air. Pollution is already brewing horror stories. "We have harrowing evidence that children are the worst affected group in Calcutta due to air pollutants," says Bagchi. He further mentions that there is a substantial amount of pulmonary haemorrhage cases in the city which are directly related to air pollution. So, is anything being done?

Vehicles contribute 70 per cent of the total pollution load of the city," says Kalyan Bhadra, president of the Bengal Taxi Association. The state's environment ministry puts the figure at 50 per cent. Kalyan Bagchi, chairperson of the West Bengal Pollution Control Board (wbspcb), says there are 820,000 vehicles on the city streets. "This is 2.6 times the number of vehicles in 1982-83," says he. However, Bhadra says the vehicular population of Calcutta is 1.1 million and that "4,500 new vehicles are added every month."

In November 1997, the Delhi-based Centre for Science and Environment released data on annual deaths due to air pollution-related diseases in Indian cities, showing more than 10,000 premature deaths in Calcutta in 1995 due to just one pollutant: spm. The West Bengal Legislative Assembly was rocked, local media screamed and a hue and cry followed. The state's environment minister Manabendra Mukherji rushed to Delhi to find out more about it. It needed deadly facts to push people out of their stupor.

Public opinion counts. But in Calcutta, air pollution has not been made into an issue of public concern. The recent developments in Calcutta are a result of the state government taking the initiative to extend the Supreme Court rulings for Delhi. However, progress is slow in the face of strong political resistance from the well entrenched trade unions and the transporters' lobby, especially the taxi drivers. The government of West Bengal had gone ahead to enforce Euro i norms in Calcutta Metropolitan Area from June 1, 1999 and Euro ii norms by April 1, 2000 after the Supreme Court directive to enforce the same in Delhi. It was also decided to junk 15-year-old commercial vehicles in Calcutta by January 2001.

The move came after a proposal by the Calcutta Environment Improvement Committee headed by the state's minister for home and police, Buddhadeb Bhattacharya, who is also the deputy chief minister. The committee, comprising representatives of various agencies, was formed in 1998 to coordinate between the various departments like health, transport, environment and police who are involved in implementing pollution control measures.

The state government had also approached the Union government for providing lead-free petrol, pre-mixed petrol and motor oil for two-stroke two- and three-wheelers and cng. Besides, a demand was also made for diesel with only 0.25 per cent sulphur. While the measures on fuel quality were enforced, phasing in of Euro norms had to be postponed in the face of strong opposition from industry. The proposal to phase out 15 year old vehicles had to be junked due to strong resistance from the transport unions. Euro i norms for non-commercial vehicles were finally enforced in April 2000.

Dhrubajyoti Ghosh of the state's department of environment claims the West Bengal government is ahead of most state governments in terms of air pollution control: "We have clean fuels in Calcutta. We are also pressing for lpg for vehicles as we cannot go in for cng. One hundred industrial units in and around Calcutta have already been closed."

Officials point out that the state government had begun to take note of the mounting evidence on the health effects of air pollution. According to a senior government official, who asked not to be named, these decisions were triggered by an alarm over the "direct evidence" provided in a study by the Calcutta University and the National Cancer Research Institute. This study reportedly said that an average Calcuttan's lung is ten times as bad as that of a person living in the interiors of West Bengal.

The only public interest petition filed in Calcutta High Court against air pollution is not by a civil society group but an individual, S M Ghosh, a lawyer. According to the wbspcb, he had contested the merit of banning 15-year-old commercial vehicles, backed by the taxi union. He has inveted a gadget called smg-hai. He promotes it by claiming that it reduces emissions from vehicle engines. An important fallout of that case was a March 2000 ruling from the high court to form a committee to recommend a plan of action to control vehicular air pollution. The committee has submitted its recommendations to the court in June 2000.

West Bengal's environment minister Manabendra Mukherji had remarked that any concrete action should be supported by public. "We have the advantage that the people in Calcutta are generally very volatile," he has said. But very little civil society intervention has taken place so far in the city, though it is generally agreed that only strong public opinion can break the political resistance of the trade unions. Gautam Gupta, professor with department of economics at the Jadavpur University, says: "There is no considerable public action which can turn the course of things, no community action." One civil society intervention is coming from the People's Union for Better Living in Calcutta (public), which is taking up the issue with schoolchildren.

The state government would be well advised to counter trade union pressures by winning over public support by publicising the results of the health studies, like the one done by the Calcutta University and the National Cancer Research Institute, to convince people about the risks from air pollution. According to Ghosh the problem lies in the communist government's dealings with the trade unions. "The unions here are very strong and the government is scared of them as it fears losing its political base. This is why most of the plans do not get implemented," says he. The failure to phase out commercial vehicles more than 15 years old is the biggest example of egg in the government's face.

Sporadic efforts are all that Calcutta has in the name of civil society or government efforts. There is no concerted effort to deal with the murderous air, as has happened in Delhi or, now, in Mumbai. While the government ignores the slow murder from vehicular pollution to avoid any political fallout, Calcutta keeps breathing heavily. It is essential the common people are convinced that air pollution is too serious an issue to allow trade unions to get the better of public health.