Call of the phantom

Call of the phantom 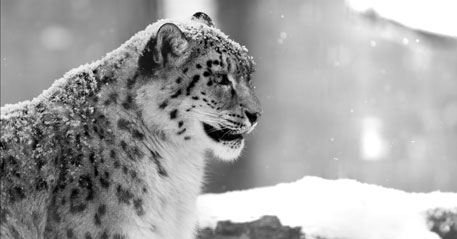 The grey ghost, snow phantom or the ghoul of mountains—the snow leopard has been given several names because of its elusive nature. The cat, found in few numbers in vast territories of the Himalaya, is rarely seen or heard. Government plans to conserve the endangered species have been just as obscure. The Project Snow Leopard, which should have been in the fourth year of implementation by now, is yet to effectively take off.

About 7,400 snow leopards are left in the world; India is believed to have between 400 to 700. They are found in the Himalayan high altitudes, covering Jammu and Kashmir, Himachal Pradesh, Uttarakhand, Arunachal Pradesh and Sikkim. The Centre launched Project Snow Leopard in the five states in 2009 as threats of poaching, habitat destruction and human conflict loomed over high-altitude wildlife. The initiative aimed at conserving high-altitude wildlife using snow leopard as a flagship species. It recommended each state to identify landscapes of around 2,000 sq km with high wildlife value and prepare a conservation plan.

To implement the project, committees had to be formed at the village, landscape and state levels, with the participation of communities, non-profits and government officials. A steering committee, including officials from the Union Ministry of Environment and Forests (MoEF), and representation from national non-profits and research institutions, was to be constituted to manage the overall project. As per the project document, all these activities should have been completed and the implementation of management plan should have started within two years of the project’s launch. But in the past four years, none of the states, excluding Himachal Pradesh, has identified sites for project implementation. The steering committee has met only thrice; its last meeting in September 2012 was held after a gap of one-and-a-half years.

So what has caused the delay? Unlike other parts of the country where wildlife is confined to national parks and sanctuaries, high-altitude wildlife is found across the trans-Himalayan landscape. “The protected areas constitute nine per cent of this region. It is, however, believed that 70 per cent of the snow leopard population may exist outside the protected areas,” says Yash Veer Bhatnagar, senior scientist with non-profit Nature Conservation Foundation and country director of US-based Snow Leopard Trust, who has been involved with the project since its inception. “It was for this reason the project envisaged working with communities and other government departments in landscapes that included both protected and non-protected areas. So, while in Project Tiger or other national parks the wildlife habitat is secured by removing people, Project Snow Leopard recommended making communities stakeholder in conservation,” adds Bhatnagar.

It seems neither the Centre nor the states are interested in investing money and effort in non-protected areas. At the launch of the project, it was announced that MoEF will allocate three per cent of its wildlife budgetary funds for saving the cat. Till September 2012, only Rs 3.5 crore has been released to the states which is less than a per cent of the annual wildlife budget. This despite the fact that MoEF has a separate component for funding conservation in non-protected areas under its flagship scheme, Integrated Development of Wildlife Habitats (IDWH). A senior MoEF official, requesting not to be named, says MoEF has other priorities. “Unless there are assured results like that from Project Tiger, the government will be reluctant to invest prominently in any other scheme,” he says. “There is a fund crunch. The IDWH budget is not enough for even the 600-plus protected areas.”

This attitude of the Centre has encouraged indifference in the states. “MoEF has never been proactive about Project Snow Leopard. They should have sent the funds suo moto as they do in case of Project Tiger. We demanded funds a couple of times but the ministry refused. Now, we have stopped asking,” says S S Sharma, Chief Wildlife Warden of Uttarakhand.

States, too, seem to have made their share of mistakes. A reason for MoEF to stop funding could be that the amount released under the project initially was not wisely spent. During the first two years of the project, Jammu and Kashmir received Rs 1.69 crore, Himachal Pradesh got Rs 93 lakh and Uttarakhand was handed Rs 86 lakh. Jammu and Kashmir and Uttarakhand spent the money without identifying a landscape and a management plan. “Another issue could be the timing of the fund reaching the field managers. As summer is the working period in snow leopard landscapes, receipt of funds after the working season is over or at the end of the financial year may not leave any scope for effective implementation,” says S Sathyakumar, senior scientist at the Wildlife Institute of India (WII), which has been involved with the project.

Himachal Pradesh has, however, got around the red tape. It has identified Upper Spiti Landscape as the state’s first Project Snow Leopard site. With the help of Nature Conservation Foundation (NCF), the state has implemented the management plan in the 3,944 sq km landscape. And the results are showing. While it is estimated that there is approximately one snow leopard in every 100 sq km of the landscape, the human-wildlife conflict has reduced in the region. “Crop raiding by wildlife is common in the valley. Earlier, people used to retaliate violently. Now, there is a drastic change. Crop insurance, incentives from ecotourism and awareness campaigns under the project have made people tolerant,” says Praveen Thaplyal, additional principal chief conservator of forests (wildlife) in Himachal Pradesh.

Based on the Upper Spiti experience, NCF and WII have finalised guidelines for the states to effectively implement the project. “We have the operational guidelines. The states just have to implement them,” says Sathyakumar. Bhatnagar suggests larger consultations should be done in states where there is not much excitement about the project, the steering committee should meet at least twice a year, and an officer dedicated to the project should be appointed in MoEF. “It is time the project made a fresh start,” he adds.