The Shree Vivekananda Research and Training Institute has made a name for itself, helping villagers in Kutch district. Among its innumerable projects are solving water problems, soil conservation and dairy farming 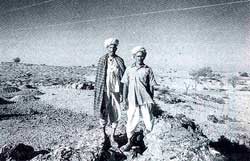 IN THE treeless, barren and rocky district of Kutch in Gujarat, the Shree Vivakanand Research and Training Institute (VRTI), or the sanstha as it is known locally, has carved a name for itself in drought relief and ecological regeneration activity.

The Kutch region, which is named so because its topography resembles a tortoise, has an area of 45,612 sq km and is India's second-largest district. With a coastline of 352 km boasting nine ports, this area in northwest Gujarat is located in the state's arid tract and seven of its nine talukas are rated drought-prone. The frequency of droughts in Kutch is once in every 2.5 years. The annual rainfall in Kutch is about 48 cms, but the problem that local farmers face is the wide variation in rain. During a three-year drought beginning 1984, annual rainfall departed from normal by 14 per cent to 74 per cent.

In 1978 several prominent Kutchi entrepreneurs set up VRTI, about 2 km from Mandvi to help the local people deal with problems arising out the frequent works at first understanding the region's problems and then seeking solutions to them.

Recurring drought in the district has left only 5.5 lakh ha of the district's 45.6 lakh ha fit for cultivation. The uncertain rain has led to farmers practising mixed cropping, and water-intensive agriculture is fast depleting the district's groundwater resources.

The fragile economy of Kutch is further hampered by the high flow of seawater into the district. A high-level committee set up in 1984 to review Kutch's problems noted seawater ingress into inherently saline soils has not only decreased the area under cultivation but also reduced crop yields. The committee reported about 3.65 lakh ha were saline, affecting 245 villages, and unveiled a remedial plan to be implemented by 1993-94, recommending check dams, gully plugs or crude dams, tidal regulators, coastal land reclamation, afforestation, changes in cropping patterns and groundwater regulation.

VRTI undertook water-harvesting projects in Ratadiya and Mota, two villages in a region ravaged by recurring drought in the mid-1980s. The plight of the villagers, dependent solely on erratic rainfall, was desperate as they had been reduced to subsisting on their livestock.

With the villagers agreeing to contribute 20 per cent of their wages towards dam construction, four check dams were built in 1988 and two more in 1989, at a total cost of Rs 3.32 lakh. These supplemented irrigation to about 125 ha. Their storage capacity of 3.27 lakh cubic metres was utilised completely by favourable rains in 1988.

In 1988, VRTI chose Motirayan village for a pilot project in recharging water tables. The village was chosen because overexploitation of groundwater resources had led to the water table dropping upto 30 metres, with the aquifers also being affected by salinity. With the villagers agreeing to provide labour, bullock carts and some funds and undertaking maintenance of these structures, VRTI undertook construction and also built recharge tubewells with a filter bed to ensure purity of the rainwater percolating to the aquifers.

VRTI also persuaded some of the farmers to adopt drip irrigation so as to make more judicious use of available water. Vijay Shah, who was the first farmer in the area to take to drip irrigation, has since converted 40 ha of wasteland into thriving fields. However, though drip irrigation is highly feasible in this region, VRTI experts caution only medium-scale and wealthy farmers can afford the initial expenses involved in this method are healthy.

The VRTI decided to set up a model farm near Abdasa, which gets water from a pipeline 70 km away. In association with the Gujarat Energy Development Agency (GEDA), a plantation was developed on a 14-ha plot, which VRTI used to demonstrate to local farmers how water could be lifted from a nearby dam to irrigate the plantation. A local farmer, Usman Adam, said because of lift irrigation, for the first time, he was able to grow groundnuts in his fields.

In nearby Berchya village, VRTI built six check dams using funds provided by the district rural development agency and the Bhanushali Gram Vikas Trust. Berchya has 35 houses, inhabited mostly by Bhanushalis. However, the VRTI-planned lift irrigation, which was implemented three years ago, still lacks an electricity connection and so villagers cannot be supplied with tap water. However, they can lift water using a pump, but most find it too expensive.

In Depa village near a well that had dried up completely. The water level has now improved dramatically to 19 feet in the 40-foot well and the water has not dried up in the summer for the first time in many years.
VRTI's research cell is responsible for conducting experiments and field trials in cropping patterns, soil conservation, moisture retention and allied projects. Cell members advise the farmers on crops, drip irrigation and developing alternate agricultural practices. In cooperation with the Indian Council of Agricultural Research, it has conducted trials to select suitable sunflower, soyabean, mustard and rapeseed varieties. The cell also conducts research on organic soil enrichers, made from vegetable waste using a microbial conversion process. A Krishi Vigyan Kendra has been set up at Mundra village to train local cultivators.

VRTI's soil and water testing laboratory studies the impact of water-harvesting structures, in particular recharging and the quality of groundwater. Laboratory personnel do research on soils in the district, using chemical fertilisers, organic and biofertilisers and gypsum, which is a soil reclaimant.

In cooperation with Agrocell Pesticides Ltd, a joint venture of Gujarat Agro Industries Corp and Excel Industries, VRTI has set up a farmer's service centre to provide technical advice on a day-to-day basis. The centre, set up in 1988, covers 14 villages, providing information and advice on the fitting of drip-irrigation systems, and liaising with the government to obtain subsidies.

VRTI has pioneered the use in Kutch district of pods of ganda baval (Prosopsis juliflora) as a cattle feed. It has developed a nutritive feed from these pods, containing proteins, calcium and carbohydrates, and offers it for sale. Gathering of pods provides a good income to impoverished farmers because the pods appear between February and May, which is the slack season in agriculture. VRTI buys the pods collected by the farmers. Its research indicates that if the ganda baval pods are supplemented with other feeds, it can become a nutritive cattle food and a suitable alternative to green fodder, which is scarce in the district. VRTI is also promoting ganda baval as a useful fuelwood, an efficient wind break and a good soil synthesiser that can also yield gum and honey.

VRTI experts maintain that an alternative resource that is worth developing in the Kutch region is dairy farming. The local cattle breed, Kankrej, gives just three to five litres of milk a day, but crossbreed experiments have achieved a yield of 10-15 litres daily. This assures the farmer of a higher income, but VRTI warns the feed requirements of crossbreeds are quite high.

VRTI's efforts to develop alternative energy sources, conducted in association with GEDA, involves the building of building biogas plants, the promotion of smokeless chulhas and training local villagers in the construction, use and maintenance of these devices.

Suchitra Jain wrote this based on a report prepared by Meena Menon while on a fellowship with the Centre for Science and Environment.