To count the tiger 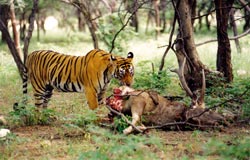 The other authors are James D Nichols, N Samba Kumar, William A Link and James E Hines.
In the past four decades, the study of ecology has undergone a revolution. Gone are the days when the siting of an animal and crude population counts of certain species were enough to settle an ecological debate. Today animal ecologists strive for models that predict species numbers on the basis of certain parameters -- in the tiger's case its prey population, perhaps.

But such work is a logistical nightmare if the animal under study is a large one. For, data are required to be collected on a geographical scale that stretches far beyond the study area of a regular field biologist. The problem of accurate estimation runs high and lack of standardised techniques and methods render comparisons impractical. Such fear is particularly well-founded in India, where most branches of science do not systematically build upon already existing knowledge.

In this context the pnas paper, 'Tigers and their prey: predicting carnivore densities from prey abundance' assumes significance. It sets standards that Schaller would be proud to cite in the occasional lectures he delivers around the world. The study is a summation of eight years work spread over 11 ecologically-different forest sites across India. For Karanth, it could easily be called the culmination of the authoritative work he has carried out of his office in Bangalore, occasionally locking horns with India's forest bureaucracy over their technique of counting tiger populations and very often embroiling himself into heated arguments with numerous other interests. Fieldwork of enormous magnitude was undertaken: biologists walked a total distance of 6,820 kilometers over eight years at 11 sites detecting 8,061 clusters of prey species. 8,677 camera traps were laid down at these sites capturing photographs of 167 individual tigers. The aim: to use the data on prey densities to put together a mathematical model that predicts tiger population, and then see if the predictions are close to tiger population figures observed from the field. If the predictions have any semblance of accuracy, the model can be used to predict tiger densities across India and also firmly establish the fact that -- more than any other factor -- the depleting numbers of tigers are a direct result of fluctuations in prey populations, such as that of the baransigha or the chital.

see graph: The simple model
Earlier studies have already laid down some ground rules to help this work. For one, scientists know that the tiger is a socially-dominant species. It does compete with other carnivores for ecological niches. It shares habitat with the dhole (wild dog) and the leopard, and dominates them. Also, the tiger usually eats large ungulate species, leaving the smaller prey to the dhole and the leopard. A study done at Nagarahole sanctuary, Karnataka shows that the five ungulates (chital, sambar, gaur, muntjac and wild pig) together provide for 96.4 per cent of the food for the tiger. Also the dhole is a diurnal hunter while the tiger hunts at night as well, the leopard less so. Tigers remove about 10 per cent of ungulates every year; other predators kill another 5 per cent in any given protected area. Karanth and his associates predicted that on an average, the tiger kills about 50 ungulates annually.


Identifying the tiger with camera traps is more reliable than tracking down its pug marks. For each tiger has a unique stripe pattern -- almost like the bar code on a book cover -- that can be identified later in photographs. Also, the chances of a field biologist's binocular-assisted eye missing the fleet-footed chital or barasingha, in thick forests, is quite high. So, chances of error are built into the population density calculations of ungulates. Figures of ungulate densities vary a lot across sites (see table: What they found). It ranged from a high of 63.8 animals per square kilometre in the Madhya Pradesh half of Pench Tiger Reserve to as low as 5.3 in Melghat, Maharashtra. According to the authors of the pnas paper, this is due to a combination of natural factors and human impacts.


Tigers on the contrary can be trapped easily on camera. The study tracked down 167 individuals on the basis of shape and arrangement of stripes on their flanks, limbs and faces -- a maximum of 26 tigers were observed in Kanha while the lowest figure of five was recorded at Pench, Madhya Pradesh. On the basis of the camera trapping data, the authors used time-tested software to predict tiger densities. Again the variation in tiger densities was quite high high: 16.76 tigers per 100 square kilometer at Kaziranga, Assam and as low as 3.27 per 100 square kilometer at Tadoba, Maharashtra.


The next job was away from the field, before a computer in the confines of a office -- to test a model that gives figures corroborating those collected in the eight years on field. After a whole lot of calculations, the authors were finally able to develop a model that substantially predicts tiger densities. There are some uncertainties which a simple model like this one cannot explain. But over all, it works to plan. It predicts populations across varying times and varying habitats that have been accorded different levels of protection.

What does the study hold for tiger conservationists? It reinstates what its lead author has tried to say a dozen times before: the greatest challenge in tiger conservation lies in not only protecting its habitat but, more importantly, ensuring food for it inside these areas. Although forests in Bhadra, Karnataka and in the Maharshtra half of Pench are similar to those in high tiger density areas, tiger populations here have not adjusted well to poaching pressures on ungulates. So, while it is easy to become a diehard conservationist, it takes careful research to notice that the subtle and slow effect of prey depletion is far more debilitating for tigers than poaching.