Catching water where it falls

By Manish Tiwari And Anumita Roychodhury

Catching water where it falls 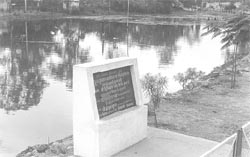 for years, Dewas district in the Malwa region of Madhya Pradesh, has been facing the grim prospect of desertification following the unregulated use of groundwater in the region. But it seems a people's movement launched by M Mohan Rao, district magistrate, may yet manage to avert such a fate.

Say the local people: " Akash pani rokenge, patal pani badhayenge " (We will harvest the rainwater and recharge the groundwater). The movement has been launched to solve the acute water crisis which the district has faced since the last 10 years. Unlike other bureaucrats, Rao thinks: "No movement can succeed unless people are involved." Moreover, he says, "People have now realised that water scarcity is their problem.And the solution can only come from them, not from the government."

In fact, the district administration has been extremely successful in mobilising the people's support in recharging the depleted groundwater aquifers. When Rao flagged off his " BhooJal Samvardhan Mission " on May 28, 1999 (the first of its kind in the state), nobody expected such an overwhelming response from the people. Out of the total investment of Rs 1.4 crore on water harvesting projects carried out in the district, the local people contributed around Rs 1.3 crore in 1999. In the first year itself, they constructed five new ponds, deepened the existing 188 ponds and 156 wells, made 2,542 percolation pits and installed 35 roof-top water harvesting systems.

"It is very sad to read newspaper headlines that " Malwa maruashthal hone ja raha hai (Malwa is going to become a desert)," says Rao. The average rainfall recorded in the district has been around 1,060 mm in the last 10 years. But as the whole Malawi plateau is made up of black cotton soil, rainwater does not percolate down to the lower levels easily. In some areas, the water table has dropped as low as 213-243 metres, says Narendra Kashyap, executive engineer, Dewas. According to Sunil Chaturvedi, who is assisting the district administration in this mission: "Only six per cent of the total rainwater percolates down to the groundwater aquifers in this region."

During the 1990s, the water problem was so acute that trains were used to supply water to the people of Dewas. People from villages such as Surmania Kharadi and Kali Ratri still walk five to six kilometres (km) everyday to fetch drinking water. The water scarcity problem is so alarming that they are forced to drink water with a reddish/ muddy hue, which the villagers extract using hand pumps. In these villages, every source of drinking water dries up soon after the rainy season.

The district administration undertook a study of the geological features of the district to identify areas where water could percolate easily. It found two such areas - Nagda and Medki Chak. According to Rao, "It is important to consider technical aspects for the success of such projects."

"So we have developed various techniques to harvest maximum water. Most of the techniques, including tubewell recharging, percolation pits, rooftop-water harvesting techniques, are totally unique and have been designed keeping in mind the geographical conditions of this area," says Chaturvedi.

Normally, water does not percolate to the deep aquifers from the water tanks. It only reaches the shallow aquifers. "So we have evolved new techniques for recharging both the aquifers. We also discussed the various structures which would be needed to increase the groundwater levels in shallow and deep aquifers," adds Chaturvedi.

It was a challenge for Rao to get public support for what he was planning. For this, the district administration organised a water conference " Jal Sammelan " in May last year. Rao himself went to the villagers and discussed how best the people could harness rainwater.

"If you use technical terms while discussing with people, they won't show much interest in the issue. We explain the technical terms in the local language and the people have responded well to this. They are enthusiastic about the project," says Rao. The district magistrate himself drives tractors for hours to make the people realise that he is very serious about his mission.

The district administration has calculated that even if the district harnesses around 100 centimetres of rainwater in a five-km radius, it will be able to catch around 2.5 billion litres of water every year. The calculation has been made specifically for Dewas town which has a population of around 175,000 spread over 20 square km.

According to Rao, the daily demand for water in Dewas town is around six million litres. It means the total water required is around 2.2 billion litres every year. "As we get most of the drinking water from Indore Municipal Corporation, we don't need to harness all the rainwater falling in this area. But even if we harness around 20 per cent of the rainwater and properly recharge the groundwater, we may never face any water crisis," he says.

Sanjay Shukla, municipal commissioner, Indore, says: "The corporation supplies around 500,000 litres of drinking water per day to Dewas. Not only is the problem in Dewas acute but Indore is facing a similar crisis. We have recently prepared a draft notification which makes it mandatory for all the new buildings in Indore to have rainwater harvesting systems."

"It is really surprising to note that a water crisis exists in a place with an annual rainfall of 1,000 mm. I want water to be available even during May-June. This is the period when my district faces severe water scarcity problem," says Rao.

"The district administration is concentrating on roof top water harvesting to recharge the dry tubewells. But their recharging technique is innovative. They inject rainwater into tubewells which, till recently, had been used to extract water. This is very cost-effective technique to recharge the deep aquifers. We know most of the people in the district cannot afford to construct water tanks which need an investment of Rs 5,000 - Rs 10,000," says Kashyap. The district administration figures show that there are 1,400 tubewells in Dewas town. The officials feel that even if 1,000 houses of 140 square metre area harvest rainwater, the town will have enough water to recharge all these tubewells.

"The deep aquifers in Dewas are thirsty. I am surprised that none of the tubewells overflowed even after such heavy rainfall this year. It means the aquifers are totally deprived of their food (water). There is no foreign aid for the thirsty aquifers in Dewas. And no one will do anything about it. It is our duty and only we have to do it," Rao opines.

The administration is facing one problem in injecting the rainwater directly into the deep aquifers. "The water may contain harmful bacteria. But after testing water samples from these recharged wells, we have not found any trace of bacteria in it," says Rao. The bacteria are exposed to different temperatures when water percolates downwards through the earth and these temperature fluctuations destroy them. "Nevertheless, we are keeping a constant watch on the quality of water," he says.

"To check foreign matter from entering the deep aquifers, we have put filter pits at the mouths of tubewells and employed other filtering techniques," says Chaturvedi. "What we have discussed is that most of the water does not need to be bacteria free. Such water can be used for bathing and washing, besides other water-intensive uses. If we want to eliminate the bacteria, we can boil the water and use it for drinking purposes," he adds.

Meanwhile, the district administration has banned digging new tubewells during the February-June period every year. "The ban is on and we won't allow this to happen in summer. But there is a provision. The matter can only be pursued further if the person, who wants to dig the tubewell, agrees to recharge the tubewell through rainwater harvesting techniques. It is only on those conditions that he may get permission," asserts Rao.

The administration also plans to make it mandatory for everyone in the district to participate in harvesting rainwater. It may be in terms of s hramadan (voluntary labour) or providing funds. The work to deepen the existing tanks and strengthen the bundhs and also the construction of roof-top water harvesting structures has begun this year in February itself.

"I want to use the concept of zila sarkar (district government) and solve the water crisis through the people's participation" says Rao.

The administration has formed several district, block and panchayat-level committees to ensure proper implementation of the programme. "After the completion of five years of panchayat raj in Madhya Pradesh, I believe people now know the importance of it. They are, in fact, coming forward to participate in this movement," adds Rao.