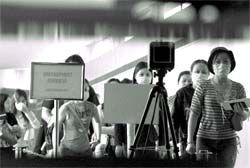 sars is a stark reminder that there is no universal safeguard against infectious diseases. The syndrome has actually exposed the lack of preparedness with regard to infectious diseases -- from hospitals, public hygiene and sanitation, to access to drugs.

David Heymann, executive director of the communicable disease programme at who, believes that emerg-ing infections can be controlled by containing known risks, responding to unknown risks and improving preparedness.

When the case made headlines on March 12, in Hong Kong, it was found that the syndrome has devastated the Chinese healthcare system. With the virus reaching distant provinces and even Mongolia, Chinese authorities have been forced to clamp down on migration between villages.

While China dithered, Singapore responded by quarantining even its healthy citizens and shut all schools after the first sars death. Taiwan has successfully prevented a potential public health crisis from mainland China and Hong Kong through its stringent seven-level surveillance systems operating since l999. These include monitoring of poultry markets, wild birds and pig stocks. An active repository of flu virus strains is maintained that keeps track of the presence of any new strains.

In India, the two nodal agencies responsible for detecting and diagnosing suspected sars cases are the New Delhi-based National Institute of Communicable Diseases (nicd) and National Institute of Virology (niv), Pune. niv would receive all samples from tests and would present results within four days. "As a precautionary measure, the Union government is only screening all incoming passengers at the international airports and ports," reveals a nodal project officer of nicd. Further, all hospitals dealing with infectious diseases in the country are required to report suspect cases to the nicd. Cases detected in any state should also be reported to the Directorate General of Health Services (dghs). The dghs would then intimate the nicd and send samples to the niv.

Global preparedness against infectious diseases in recent times has been from the perspective of bioterrorism. But this cannot address the possibility of prevention from an ecological perspective. Through better sanitation and disciplined monitoring, and understanding what ecological changes can trigger release of microbes, governments can ensure that they keep ahead of outbreaks by microbes.

What is the actual cost of preparedness? A study by Dutch researchers found that an additional investment of us $120 million would be needed to avoid influenza-related mortality. But then, even a "prepared" country like the us has looked uncertain in its approach towards sars. A study by Martin Melzer and his associates at cdc estimate that for flu control, if the current strategy is employed unchanged, would cost the economy us $71.3 billion to us $166.5 billion annually.

Meanwhile in China, international crisis management efforts are underway. The cdc has activated its emergency operations center. A similar initiative has been taken up by who in Hongkong, Beijing, Shanghai and Geneva. With who's assistance, China has developed a national sars reporting system and elevated sars to the status of cholera and yellow fever.
To some extent, the crisis spawned by sars is a failure of global health governance. The International Health Regulations (ihr) -- a set of rules proposed by the who -- are a legally binding framework for preventing the spread of disease across the world. These laws, however, focus on plague, cholera and yellow fever. They have not been modified significantly enough since its inception in 1969 or recent amendment in 2002.

The World Health Assembly in Geneva is specifically authorised to administer "sanitary and quarantine requirements and other procedures designed to prevent the international spread of disease". But current regulations are also restricted to the three diseases and based on outdated quarantine practices.

Even if ihr's scope was expanded to cover all infectious diseases, implementation of health-based trade barriers by member nations would throw a spanner in the works. Driven by political and economic pressures, neighbours and trading partners of countries affected by epidemics often overreact. The restrictions they impose are far in excess of those permitted by the ihr.

sars has curtailed liberty, where individual rights are pitted against public health imperatives. Legal action can now be enforced to isolate, hospitalise, and quarantine individuals. Singapore's authoritarian government had no such reservations in imposing strict quarantines for doctors and suspected patients. A more people-friendly and cosmopolitan Hong Kong, on the other hand, did not quarantine at first, and recommended isolation, which led to rapid spread of sars. In the long run such leniency will prove expensive. Enforcing strict quarantine will cause temporary loss of liberty but it is a decision that can prevent health damages of an unforseen nature. sars created a wave of xenophobia -- both in a tolerant Asia and in the intolerant west.

The only strict action that the World Health Assembly is authorised to take under "exceptional circumstances" is to withdraw membership privileges of a country. But such sanctions would also hinder the who's objectives of tracking, controlling and preventing incidence and transmission of disease.

who has been criticised for relying solely on information provided officially by member states regarding outbreaks within borders. Fearing self-incrimination, countries do not report diseases -- as in the case of the sars episode. Unfortunately, the current who regime gives individual nations the liberty to determine whether a disease constitutes a public health emergency of international concern. To some extent, the who's Weekly Epidemiological Record (wer) under the ihr and Global Outbreak Alert and Response Network have helped plug the loopholes. For example in the sars case, the wer reported the sars incidence only by January, almost two months after the first case occurred in Guangdong.

Villarreal is sceptical about legal measures: "Although a new body on international law could well decrease the likelihood of such events, laws alone will not control disease emergence. This phenomenon is possibly inherent in all living systems so I don't expect it to be eliminated."


Hong Kong, Singapore and Malaysia have received bad economic hits. Tourism has fallen by more than 20 per cent. Hong Kong's pre-sars gross domestic product (gdp) projection of 3 per cent for 2003 is now down to 1.5 per cent, according to Dutch Investment firm ing Financial Markets. Tim Condon, ing's chief Asia economist, observes: " sars appears to be a more serious threat to regional growth than the war in Iraq." Regional forecasts done for these countries by Merrill Lynch also show lower growth. Ironically the gdp of China is expected to go down by a mere 0.1 per cent. This is because China's agricultural and manufacturing base can offset losses to tourism and the services sector. Airlines, cargo and courier services and the telecommunication industry have been affected worldwide. "If the sars episode is linked to domestic animal origin, then we can see a significant decrease in the near future of agriculture exports largely because countries will put non-trade barrier to goods from the region", opines John Cheung, director of international trade services, government of Taiwan.

The battle may have just begun.

Story co-ordinated by Pranay G Lal, with inputs from D B Manisha, Sarita and Vibha Varshney.