How do you destroy a forest? Cover it under Project Tiger and alienate the local people. An example from Bihar 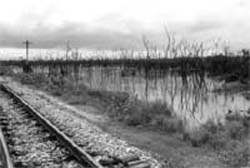 corrupt forest officials, timber mafia, and poor government planning have led to extensive destruction of the only remaining natural forests in northern Bihar. The 91,000-hectare (ha) Valmiki Tiger Reserve ( vtr ) in the district of West Champaran on the Indo-Nepal border is fast losing its forest cover due to rampant felling of trees.

The Gandak river, which serves as the boundary between India and Nepal, has also changed its course, washing away about 2,500 ha. "More than one lakh valuable trees have been washed away from the forests. Forests worth Rs 142 crore have been destroyed due to water-logging," reveals Ashok Prasad, conservator of forests ( cf ), vtr . Besides, the shifting of the river has been beneficial for Nepal. About 2,200 ha of the forest land now falls on the Nepalese side of the river. This land has now virtually become a no man's land, a haven for timber smuggling. The government, however, has turned a Nelson eye, leaving the forests at the mercy of international smugglers. There are allegations of Pakistan's Inter State Intelligence's ( isi 's) involvement in this heavy destruction of forests. "It seems smugglers are operating from the land now in the Nepalese territory," says A K Sinha, divisional forest officer, vtr (Range-I ) .

Some forest officials from this reserve have already been implicated in Bihar's biggest forest scam during 1983-94. "This forest scam would be to the tune of Rs 100 crore," says J L Srivastava, the forest official who unearthed the scam. More than 20,000 sal trees have been felled in this period. And the culprits roam scot-free.

The forest department here hardly receives any funds for conservation efforts. It does not even have the money to provide salaries to the staff. Since 1994, when the forest was included in the Project Tiger, fund flow has virtually stopped. The decision to include the forests in Project Tiger is proving to be devastating. There have been no funds since 1994 for regeneration of forest cover, protection of wildlife and providing employment to villagers totally dependent on the forests. Assistant conservator of forests ( acf) Aswini Kumar says the field staff have not received salaries for the last 10 months and the forest guards for 15 months. "We do not have our own money to send accused to jail or bring the seized materials to our offices," says Buwaneshwar Khan, a ranger.

Also, a major portion of the forests has been declared 'core area', where the entry of tribals and forest dwellers is prohibited. People from the 142 surrounding villages -- mostly tribals or belonging to the Tharu community -- have been deprived of their rights to collect firewood and fodder. In the absence of employment, they have started collaborating in the destruction of the forests.

"This has created major socio-economic problems and forced villagers here to become dacoits or fall into the hands of foreign agents," says Sinha. "Bihar forest policy today alienates local people. The government should provide work to these villagers. Otherwise the problem will go out of control," says Vipin Shukla, a local leader of the Congress party.Sinha says that villagers are now resorting to anti-forest activities and helping smugglers in logging and poaching operations for their survival. He blames the bureaucratic style of functioning for the present crisis. "The delay (in getting funds) is a major source of corruption as officials make false vouchers without executing the project. It is now happening with most of the projects in Bihar," says Prasad.


Though it is said that foreign agencies have been sponsoring terrorism in the Indian territory, their alleged involvement in forest destruction is absolutely new. "The forest department has recently seized foreign arms and choppers. Foreign agencies are providing sophisticated arms and ammunition to jobless villagers and instigating destructive activities," says Sinha. He says that Munna Khan and Laila, two international criminals, smuggle trees such as khair , sal , sagwan , and cane from Madanpur range of the forest to different parts of Nepal. They operate from Susta (see box: Unfriendly river ). "The government knows about these activities on the Indo-Nepal border and is making efforts to stop them from making inroads into the Indian territory," a Central Bureau of Investigation ( cbi ) official told Down To Earth .

But the forest department does not have resources and humanpower to fight against the criminals, says Prasad.


The Bihar government has constituted a committee to investigate the forest scam. The committee headed by Zabir Hussain, Speaker of Bihar Legislative Assembly, found many serious irregularities in the forest department. The committee's report confirms that the then managing director of Bihar State Forest Development Corporation ( bsfdc), and other forest officials were involved in large-scale logging. Two other bsfdc officials, the director (marketing) and finance advisor, were also held responsible for heavy losses to the exchequer. The report points out that bsfdc had bought seeds of the karanch tree worth Rs 68 lakh and later sold them for a mere Rs 82,000.

Though Hussain recommended stern action against these officials, nothing significant has been done against them. "Interestingly, many other officials who know about their involvement in the scam are being forcefully transferred from the vtr ," reveals A S Raman, member, Wildlife Advisory Committee of Bihar . The government has now initiated a cbi inquiry against the bsfdc officials who have been charged with corruption.

A senior forest official told Down to Earth the inquiry period of 1984-93 is bound to confuse the investigators. He points out that large-scale logging was carried out in 1993 and more than 15,000 trees were felled.

"The investigation should technically be conducted within one year of felling the trees. But the cbi has been asked to probe the matter after five years. It would be difficult now for cbi to get correct picture of the whole scam," says Kumar. Another forest official alleges that a former Bihar forest minister was involved in the logging operations. "The minister only worked for destruction of the forests and to accumulate wealth," the official says.

"The police are playing a key role in illegal felling and poaching operations. Many police stations in thse area receive money for allowing illegal logging," says Prasad. The officer recalls intercepting a police jeep that was taking away medicinal plants from the forest area.


Despite several reports sent to the government subversion in the area by foreign agencies, erosion of the forest land by the Gandak river, and water logging problems, it has not even bothered to send fact-finding teams to the area.

An example of the bureaucratic indifference is the Bagha-Chitawni rail line that connects Bihar and Uttar Pradesh. In 1993, a three-km-long and six-metre-high bundh was constructed to lay the railway track. It blocked two streams, Rohua and Kotraha, leading to water-logging. Prasad cites a survey conducted in 1996 that showed that about 1,691 ha of forest land was submerged. Destruction to forest resources was to the tune of Rs 142 crore; environmental losses were to the tune of Rs 860 crore. "Even after several reminders, the government of India is silent," says Prasad.

Then there is the issue of mining operations on the banks of the Pandai river in the tiger reserve. "We had opposed the Central government's move to give licences for stone mining in the area. But it did not bother to check the facts before issuing licenses," says Prasad. There are allegations that major logging and poaching operations go on in the name of mining. Prasad recommends an environmental impact assessment before giving permission for mining operations in the reserve.

West Champaran has also witnessed a rampant proliferation of saw mills. According to Sinha, there are 80 saw mills and 12 plywood mills operating in the district today. Of these, only 35 licences for saw mills have been renewed and three for plywood mills.