Private players set up forest certification body even as the ministry, which manages 90 per cent of the forests, gives it a cold shoulder 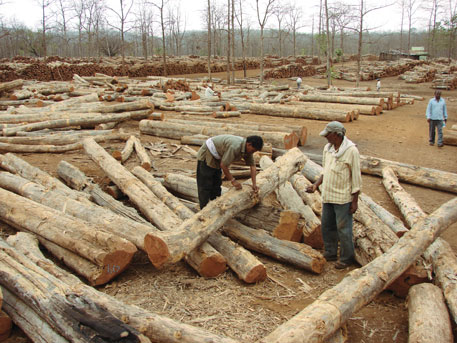 On march 16, representatives of forest-based industries, non-profits working on forestry, auditors and state forest department officials gathered at the swanky Ashoka Hotel in New Delhi. Amid much fanfare and media presence, they launched the Network for Certification & Conservation of Forests (NCCF), a national body that will set standards and govern the process for certifying India’s forests and their products on sustainable forest management. The participants, including representatives of international forestry agencies, hailed the move.

However, the Union Ministry of Environment, Forests and Climate Change (MoEF&CC), which is the custodian of more than 90 per cent of the forests in the country, gave the event a miss.

Forest certification is a market-based tool that is voluntarily accepted by more than 120 countries. It ensures that manufacturers of forest products conform to existing laws and other ecological, economic and social best practices, such as protection of biodiversity, maintaining sustainable harvest levels and respecting land tenure rights of tribals. Globally, two forest certification schemes are prevalent—Forest Stewardship Council (FSC) and Programme for the Endorsement of Forest Certification (PEFC). While FSC provides centralised certification against its unified standards across the world, PEFC endorses national certification bodies with country-specific certification standards. NCCF will soon set the standards and mechanism for certification which will be evaluated by PEFC.

Private players in the country are pushing for forest certification because several developed countries have put a ban on non-certified timber and timber products. “To thrive in the global market, many forest produce-based industries have been importing raw material from certified forests from other countries lately,” says an NCCF member.

India is also the only country with a considerable forest cover that has not opted for a domestic certification. Some private players and forest development corporations in the past have got FSC certifications, but the percentage is inconsequential. Of the total 78.92 million ha forest and tree cover in the country, only 0.8 million ha of forests have been certified by FSC.

Interestingly, MoEF&CC has been planning to set up a national forest-certification body for the past decade. In 2008, it set up the National Forest Certification Committee (NFCC) to recommend an institutional mechanism to establish a forest certification system in India. The committee, in its report in 2010, said, “India must not miss the opportunity of drawing upon Certification for Credibility, Sustainability and Justice in the forest arena of the country.” In 2012, the then environment minister Jayanthi Natarajan announced that the scheme was about to come through. Even a Cabinet note was drafted and circulated to start the scheme. But the plan did not materialise.

Though MoEF&CC has put two of its officials in the NCCF board, the ministry seems to be distancing itself from the process of certification. “We are not sure right now if certification is required. There are other priorities in terms of protection of forests which require more focus. While the government’s plans of establishing the forest certification council are still in the pipeline, the industry is free to go ahead with its own certification mechanism,” says Rekha Pai, inspector general of forests with the MoEF&CC.

MoEF&CC sources say the ministry is opposed to independent scrutiny of its forests. “A section of officials thinks forests departments have been successfully managing forests for over 150 years and there is no need of certification. A few are apprehensive that the country’s forests may not meet the high global standards for certification and invite unnecessary criticism,” says a senior forest official.

According to the Forest Survey of India (FSI) reports, forest cover in the country has increased by 3.3 million ha between 1999 and 2013. However, Down To Earth’s State of Environment Report 2015 highlights that this increase in “green cover” is basically due to private plantations outside natural forests. In the same period, India has also lost 9.4 million ha forest cover, which suggests massive deforestation in the government-owned forests.

The other argument forest officials give against forest certification is that it is a market requirement; the country hardly produces or exports timber from government forests. The reason given for this is the “low productivity” of Indian forests and a Supreme Court ban of 1996 on felling of forests without working plans which “forced the governments to prioritise conservation of forests over production”.

The truth is that the government has failed to take up sustainable forest management. Forest departments have 76 million ha of forests under them, of which 17 million ha are designated for timber production, as per the Food and Agriculture Organization. FSI estimates suggest the annual productivity of Indian forests is 0.7 cubic metres (cu m) per ha, which means the forests should produce 11 million cu m of timber annually. In reality the production from government forests is 2.5 million cu m of timber a year, as per the 2010 report by Indian Council of Forestry Research and Education, Dehradun.

“If the government takes up certification, there would be motivation and pressure on the machinery to fix these loopholes in the forest management,” says a forest official involved.

Maharaj Muthoo, president of Roman Forum who had been part of FSC and PEFC governing boards and headed the national forest certification committee, says demand for Indian timber will go up if the government manages its forests better. “Once you have enough certified forests and wood produced from them, automatically the market would develop for the premium product. Remember, timber produced from certified forest management does not harm the forest ecology at all. The revenue that you will start generating from forests will help build constituency for standing forests which we are losing in India right now,” he says.

Despite the ministry’s reluctance, NCCF members are hopeful the process will benefit private plantations. “Several plantation owners are ready to embrace the scheme. Even forest departments and forest development corporations in Uttarakhand, Tripura, Karnataka and Madhya Pradesh are keen on taking it up. Once there is enough domestic demand for certified products and the government realises the value of certification, I hope even the government forests will be certified in large extent,” says NCCF chairman K K Singh.