Change is in the process

Change is in the process

One way of managing waste do not produce it

TSDFs do not completely eliminate waste. Proper management of hazardous waste will require a shift in the way we look at waste it is not inevitable. "Our industrial processes are designed to produce hazardous waste," said Go- pal Krishna who runs Toxics Watch, a campaign against waste incineration. "What we have to address upfront is the design crisis. End-of-pipe solutions like incinerators ignore the possibility of inbuilt clean production, based on the life-cycle assessment of the product."

In India the move towards cleaner manufacturing processes is, however, slow because of the high cost of investment in new technologies and the absence of the right policy thrust. But it is happening. Take the chlor alkali industry that makes caustic soda and chlorine, raw material for many other industries. The process involves use of mercury cells for electrolysis of salt to separate caustic soda and chlorine.Mercury affects the nerve cells. About 30 per cent of India's chlor alkali plants use mercury cells and are responsible for 40 per cent of mercury pollution in India from industrial operations. The rest have replaced it with membrane cells, which are basically a fabric. cpcb has given the industry till 2012 to phase out mercury from its process.

Switching over to membrane cells also decreases energy utilization. Kanauria Chemicals' energy consumption has reduced by a fourth after its two plants at Renukoot in Uttar Pradesh switched over to membrane cells at the cost of Rs 120 crore each. "It required us to set up new plants since making the changes in operating plants would have required us to shut them down for four-five months," said T D Bahety, director of Kanauria Chemicals.

In case of asbestos, a carcinogen, India has no policy to discourage its use in textiles, building materials, insulation and brake linings in automobiles. "Since the import of asbestos is cheaper than any of its alternatives like poly venyl alcohol, there is no economic incentive to shift to cleaner production. There are alternatives within India also like natural cellulose fibre and a lot of research has been done on it, but there is little budget to promote it in the market," said Madhumita Dutta of Corporate Accountability Desk-The Other Media, a Chennai-based advocacy organization.

Eternit Everest, a company producing building material, has shifted 40 per cent of its operation to non-asbestos products. "We are using synthetic fibre for roofing sheets instead of asbestos," said Sujoy Mukhopadhyaya, deputy manager (marketing) of Eternit.

In synthetic organic chemical industries, such as pesticides, bulk drugs, paints and dyes, the solvent can be recovered and reused. These industries can also replace chemicals used in loads to facilitate a reaction with catalysts, a compound that mimics enzymes in speeding up a reaction, that are used in much smaller quantity. This will drastically reduce the generation of hazardous sludge. Solvent recovery is happening in India but not catalytic oxidation, mainly due to the cost factor, said D D Basu, senior scientist with cpcb.

A project to recover concentrated sulphuric acid from spent solvent through combustion at a high temperature is planned at Ankleshwar. There are 40 industries in Ankleshwar that generate about 2,000 tonnes of spent sulphuric acid per day. These are dye industries and drug manufacturers. The spent acid has to be neutralized with lime to dump it in the landfill. "As a result, more than 85,000 tonnes of contaminated gypsum (sulphuric acid neutralized with lime) goes into the common landfill every year. 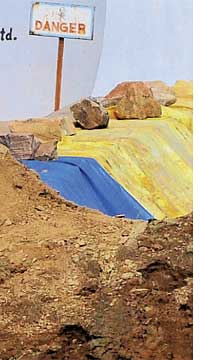 The landfill at beil, which was supposed to last 10 years is already about to be filled up in five years," said C B Upasani of Jyoti Om Chemical Research Centre in Ankleshwar, a company that is giving technical advice to Spent Acid Recyclers, which will carry out the Rs 125-crore project.

The project awaits clearance from the Union Ministry of Environment and Forests for subsidy; the Gujarat government has cleared a 25 per cent subsidy. The recovered acid will cost half the current price, said K K Sundaram, chairman of Spent Acid Recyclers.

Many such changes towards cleaner technology are happening but the hiccups about initial investment remain. "Industry only looks at the short-term investment. They don't see that the changed technology will be an asset in the long term. A manufacturer has to be responsible for the life-cycle of the product from womb to tomb," said A G Bhole, environmental engineer and former head of the Department of Civil Engineering at Visvesvaraya National Institute of Technology in Nagpur.

It is here that right policies and putting subsidies in the right place can help. P Khanna, former director of the Indian Institute of Environment Management in Mumbai, in his 2001 case study of corporates in Kawas-Hazira region of Surat noted the environment policy must move from command and control regulation--that come into play after a pollutant is generated--to a more proactive approach based on economic efficiency, environment responsibility and societal relevance to make markets work for the environment. Gopal Krishna added that the environmental cost should be included in the cost of the product.


A waste minimization programme did start in India in 1995. Financed by the environment ministry, it is being carried out by the National Productivity Council and focuses on discussions within the small-scale and medium industries to use technologies for reduction of waste. "There are three million small and medium industries in India with an immense potential to prevent pollution. The idea was to talk to these people in terms of economic gains rather than pollution control," said a ministry official who played a key role in the programme.

Some companies did respond. In Vatwa industrial area of Ahmedabad, Dintex Dyechem Ltd, which makes vinyl sulfone dye, reduced the amount of waste water, sludge and other waste by more than 6,000 tonnes in a year, besides reducing water usage and recovering acids. The Centre in 1997 listed vinyl sulfone among the nine restricted items generating high toxic pollution. To recover hydrochloric acid from gases it modified the scrubber (cleaning) system, to recover sulphanilic acid it installed an evaporator that separated the acid from the waste and also recovered 65-70 per cent concentrated sulphuric acid. It installed a drier to extract salt from waste water and a bag filter to collect dried final products that were lost earlier.

The investment made on these equipment was Rs 1.3 crore, while the net saving on acid and reduced waste after cutting the operational cost was over Rs 3 crore annually.

However, a big change is yet to emerge. "With changing officials in the ministry we have to restart building the momentum," said an official of the council. "We pay facilitators Rs 1.5-1. 75 lakh, but many of them trained by us were hired by gtz and other big companies. The new ones demand better pay."

Gopal Krishna is critical of the progress made by the council and technical institutes. They were supposed to come up with clean technologies but have remained a non-starter and minimal budget is issued for R&D for clean technologies, he said.

In 2003, the ministry launched another charter on Corporate Responsibility for Environment Protection. It set targets regarding conservation of water, energy, recovery of chemicals, reduction in pollution, elimination of toxic pollutants and residues. But compliance to these standards was kept voluntary, making it ineffective.

Contrast this with the European Union's initiative to restrict the use of hazardous substances in electrical and electronic equipment. After passing legislation to substitute heavy metals, like lead and mercury, with safer alternatives and promoting collection and recycling of such equipment, the EU in December 2008 proposed a mandatory target for the industry to collect 65 per cent of the electronic equipment. Market has to be made to work for the environment.