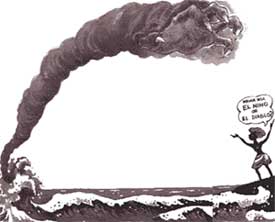 " we were lucky, El Nio did not even touch India this time," said S R Kalsi, deputy director general, India Meteorological Depart-ment (imd), even as freak rains were spoiling crops in north and central India in December. It was tempting to blame all this on the El Nio that was building up. It still remains active. So was the imd being discreet?

For the uninitiated, El Nio is a meteorolo-gical phenomenon marked by higher water temperature and lower atmospheric pressure. It usually originates in central and eastern Pacific Ocean, and disrupts global climatic patterns. Climatologists are currently trying to unravel how the Southern Oscillation (enso) shifts air columns, disrupts currents in the Indian Ocean and affects cloud formation over the subcontinent.

Billy Kessler, oceanographer at the Pacific Marine Laboratory, in Seattle, usa , studied the enso effect on Tahiti and Port Darwin, Australia. He found that when atmospheric pressure in Tahiti was high, it was low in Darwin. He also noted that a high pressure at Tahiti indicated a westward wind, - the normal pattern of trade winds. When the pressure over Tahiti was low, coinciding with an El Nio year, wind blew in the opposite direction, towards the east.

"There is no rule of thumb. Sometimes El Nio affects the monsoons, sometimes it does not," says Kalipada Chatterjee, former director of radio meteorology at imd. "Last year, there was a corresponding relation between El Nio and the monsoon over Asia. When every part of the world was affected, India should have been affec-ted too," he says. Contrary to imd's claims, data shows that India did experience El Nio-induced erratic rain pattern late-1997.

" imd is capable of forecasting El Nio-induced rainfall anomalies, but since the Indian economy depends heavily on the monsoons, comments from their side are rare," says P Sanjeeva Rao, a scientist at the department of science, ministry of science and technology. Noting that 1997's monsoons were relatively normal, Rao says, "El Nio and the rainfall anomaly for the Indian region are unrelated as there is no evidence of a direct physical connection."

However, statistical proof of El Nio's effects on India and its neighbouring countries exist. According to a 1991-research paper, in most cases, tropical cyclones over the Bay of Bengal crossed south of 17 latitude north towards the Andhra Pradesh-Tamil Nadu coast, implying that these regions experienced excessive rainfall. And, the year before El Nio, 79 per cent of the cases saw the cyclones crossing either north of 17 north or returning to the northwest direction. This disrupted all monsoon patterns.

Another study of El Nio's impact over Indian rainfall from 1896 to 1989 revealed that in 90 per cent cases, the annual rainfall was below average. And in 60 per cent cases, rainfall occurred in the driest regions of India.

Climatologists usually make two kind of forecasts. The first is statistical forecast, which is based on historical records. The other, called dynamic forecasts, is based on numerical models of the coupled ocean-atmosphere system. Statistical forecasts correlate observed weather conditions with indices of the occurrence of El Nio. For this, the sea surface temperature (sst) in key regions of the equatorial Pacific are used to define an "El Nio period". For instance, during an El Nio, sea water off Peru will be warmer than the Indonesian coastal region. The scientists can also use a measure known as the "Southern Oscillation Index" (soi) that denotes the atmospheric pressure differences between the two regions - the Indonesian region and the Eastern Pacific.The El Nio and soi are opposite in phase - a negative soi, indicating low pressure in the in the Eastern Pacific and high in the Indonesian region, is signature for a positive El Nio temperature anomaly and vice versa. Thus, this warming intensifies the eastern wind currents and weakens the westward winds.

As the sst data is available only for a few decades, scientists correlate it or the soi with the amount of rainfall in a particular region to forecast the likely recurrence of heavy rains in an El Nio year.

If a particular shift in the sea surface temperature during an El Nio year causes heavy rains, then the same kind of shift in another El Nio year will increase the likelihood of heavy rains.

Such statistical forecats are easier to comprehend since they are based on actual events. But there is a catch. These forecasts can fail as the El Nio is not an exact, repeating phenomenon. Moreover, there are many climatic oscillations occurring simultaneously that affect the weather of a particular region.

The tools used for dynamic forecasts are hydrodynamic equations. These are mathematical representations of physical laws involving motion, heat and water mass. Based on these, climatologists prepare models to predict the behaviour of various atmospheric components like clouds and air currents. Since these forecasts are based on actual observations, the problem of averaging statistics of many events differing in crucial details is eliminated. Methods currently used for understanding climate change involves crude grid-mesh representation of the Earth. These grids have spacing that vary from tens to hundreds of kilometres. To represent cloud models, the available computer grids are far too coarse to resolve individual cloud properties.

Therefore, to determine the water content in a cloud and its potential to cause rains over a region, scientists generally make assumptions based on broad computer models. To estimate the amount of water and heat released by a cloud, it is necessary to know the speed and humidity of a rising column of air. With precise data on these two parameters, scientists could predict when and how much rain an area would experience. But since the behaviour of every molecule of air and water cannot be simulated, dynamic forecasting in limited in its capabilities. With more reliable forecasts, nations fearing climatic anomalies due to the phenomenon can plan for impending emergencies, thereby helping mitigate El Nio-related damage. Australian farmers, warned six months ago of a possible drought, sold off cattle last year and changed planting plans to minimise losses. This century's worst drought in South Africa during 1991-92 was a direct consequence of enso. Grain productions in the region fell from 11 million metric tonnes to less than half. Failing to respond to climatologists' warnings of an El Nio-induced drought proved expensive to the South African government and humanitarian aid organisations world wide.