Using automobile batteries both Indian and foreign, Clandestine lead-smelting units near the Delhi border have played havoc with the health of villagers 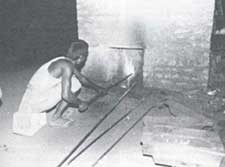 RETIRED police officer Tarif Singh and his friends in North Delhi's Siraspur village heaved a sigh of relief as the last of the 23 clandestine lead-smelting units closed shop in their neighbourhood on May 7. "Many of my neighbours had serious breathing trouble because of the smoke," Singh says. Many others suffered from dizziness and nausea. And, approximately 100 cattle died after consuming contaminated fodder.

Contrary to reports in some newspapers, the units were shut and dismantled on May 7, following persistent protests by the villagers, confirms Gajraj Singh, the former uppradhan of Siraspur's gram panchayat. As a follow-up to a petition signed by more than 150 villagers, environment minister Kamal Nath sent a 5-member team of scientists from the Central Pollution Control Board (CPCB) to test the soil.

The scientists' report was alarming. The soil had a lead concentration of 80 mg/kg at a distance of 50 m from the plant, against a normal of 8 mg/kg. The grass around the site had a 50 mg/kg concentration of dry weight against a standard of 1 mg/kg and even the guava leaves had 23 mg/kg of dry mass of lead in them.

Tarif Singh, whose fodder crop has been seriously affected, says, "Initially, there were only 2 or 3 units and we weren't bothered. But the number suddenly shot up to 23 in the last 6 or 7 months."
The villagers allege that in 1990 Parashuram Rana of Siraspur, who owns 4 smelting units himself, allowed a lead smelter from Varanasi to establish a unit on a 1-hectare plot in a remote corner of the village. Says Gajraj Singh, a former member of the village panchayat, "Several years ago, Rana usurped the land from the panchayat by getting the records altered." Rana, however, denies the allegations. "I did not own any unit. My income came from the Rs 1,300 I charged as rent per unit per month. They are envious that I have made some money," he says.

Even as the allegations and denials fly back and forth, the lead-smelting has taken its toll. The worst hit are the members of the scheduled castes who live close to the units. Children have fallen ill and some have been suffering from diarrhoea and wheezing for months. Women complain of dizziness. And the community has lost the maximum number of cattle. Laments Ishwar, whose 5 buffaloes died, "I have lost my livelihood. A buffalo costs at least Rs 10,000. Who will compensate me?"

"The government should immediately conduct a thorough medical check-up of the villagers," says Sardar Singh, a retired headmaster. The CPCB report also recommended that the lead levels in the blood, urine, nails and hair of schoolchildren be checked immediately.

Although Delhi's chief minister Madan Lal Khurana said that "if necessary, a medical examination will be carried out", he felt that it would be difficult to book the guilty, given the time taken by medical processes and also because the culprits have fled the scene. This feeling is shared by officials in the ministry of environment and forests (MEF). Moreover, Khurana failed to give any assurance about compensating those who had lost cattle.

Siraspur's relief was, however, the bane of Mundka village, near the Bahadurgarh border of Delhi, close to Nangloi. With masterly efficiency, within a week the clandestine operators set up 6 lead-smelting units in this village. On May 18, the 20-feet-tall chimneys were spewing smoke into the cloudless night sky, as the lead plates of car and truck batteries flamed at 600 degrees Celsius in crude brick kilns.

The batteries bore foreign brand names uncommon in the Indian market. Some truck drivers and labourers confided that these are brought from the Kandla port in Gujarat. And although MEF joint-secretary J C Kala says, "It is illegal to import used car batteries to India under the hazardous waste management rules, as they contain lead," a truck driver claimed that he had the necessary papers to pass the numerous checkpoints on the highway.

Kala was backed by MEF deputy-secretary George Joseph, who maintained that these units are neither registered nor have pollution control clearances. As lead recycling is a hazardous activity, licences are given only after strict scrutiny by the state pollution control boards, Kala added.

But the enforcement of these norms leaves much to be desired. Two policepersons rode up to one of the units on May 14, demanding to see the owners. On being told that the owners didn't live there and that their representatives had "gone out", they rode away blissfully unmindful that 4 more units were in operation less than 1 km away. "Hafta tay karenge, aur kya," (They'll decide on the protection money, what else?) said a veteran worker, exposing his blackened gums in a smile.

Although quick to make such remarks, the workers have learnt not to reveal their own names or those of their employers, for fear of losing their jobs, apart from getting the wrong end of the stick by hirelings. Many of the workers are barely in their teens. One, hardly 15, talked of his family's debt to a money lender back home in Varanasi district and the frequent beatings he has received in the past 1 year that he's been on the job. As a night shift worker, he is supposed to get Rs 45 per night, but he hasn't seen cash so far.

The working conditions in the units are appalling. There is no separate dumpsite for the waste, which is upturned in a corner of the compound. Lead fumes pervade the compound. The workers are not provided any gas masks.


The situation worsens at night. A mixture of charcoal and lead is fired in the kilns. Towards dawn, all the impurities have been removed from the molten lead. The 600 degrees Celsius fluid is then manually poured into moulds with a huge ladle. "One slip and you are maimed forever," says a worker.

The end product is, however, alluring -- a 5 kg ingot of pure lead, which fetches at least Rs 30 at Motia Khan market, the workers say. According to the workers at Mundka, each kiln produces about 1.5 to 2 tonnes per night. They say 10 truck batteries yield about 27 kg lead and 10 car batteries about 25 kg lead.

The question is: how on earth do the foreign batteries get past customs, and in such huge quantities?