...And the government's knee-jerk reaction to a TRMS-NEERI study of hazards in the chemicals industry 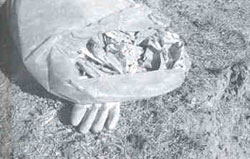 THE ministry of environment and forests (MEF) has catalysed sweeping amendments in the suddenly important Manufacture, Storage and Import of Hazardous Chemicals Rules (1989). Under a new regime, safety audits have been made mandatory for 924 Maximum Accident Hazard (MAH) units and other industries producing or handling hazardous chemicals. But it has taken the government 10 dawdling years after lethal methyl isocyanate leaked from a tank in the Union Carbide factory in Bhopal to wake up to unanticipated but entirely possible apocalypse from chemical industries functioning without an iota of safety sense.

Disturbing findings of a detailed risk management analysis carried out in 9 major industrial areas with predominantly chemical industry units have prompted the audit. In fact, frantic steps to carry out hazard analysis of units in Delhi, Patalganga, Ankaleshwara, Howrah and Hooghly areas have already been initiated.

Kept under wraps till now by the MEF, the findings by the 2 consultancy firms -- Tata Risk Management Services (TRMS) and the National Environment Engineering Research Insitute (NEERI) -- condemns as "grossly inadequate" the on-site disaster management strategies of plants run by both medium-size units and chemical industry giants in the Thane-Belapur belt (Bombay), Kota, Vadodara, Raigarh, Tuticorin and 3 other industrial belts.

So scathing was the findings' criticism of the state of unpreparedness of the plants that early this year the inspector of industries in Bombay served show cause notices to 19 units in the Thane-Belapur industrial belt, home to multinationals like Bayer, BASF, NOCIL and Colorchem. An accident in any of the units can throttle 25 square kilometres of densely populated Bombay.
M Senputa, additional director (scientific) in the MEF, says, "The consultants were mandated to carry out a survey in 9 MAH industry-dominated areas. The idea was to prepare a model for effective on-site and off-site disaster management plan for an entire district."

A Chatterji, general manager, TRMS, says, "The brief was to analyse the emergency plans manifested in the Environment Protection Act (EPA) at the MAH industries." Requesting anonymity, a senior official with the MEF claims, "The study revealed that emergency plan jottings in the industries ranged arbitrarily from 2 pages to 200. Importance in terms of safety measures was accorded to the production process, but storages, considered immobile and thus assumed stable, were ignored. The bigger industrial units had drawn up elaborate plans, but it was transparent that during emergencies, these plans would help little. Many units stored chemicals far in excess of government-stipulated limits, and many did not even have a fire control system."

What worried the consultants was that against the normal 3 to 4 levels of safety system backups, most units were operating with just 1 or 2 levels. Safety systems are supposed to be both disaster warnings and curative in nature. Here, the emergency plans were stupidly oriented more towards best case scenarios instead of the worst.

Subir Gupta, an expert in chemical risk management, says, "There is a tendency among entrepreneurs and workers to trust history. If there has been no accident for a certain number of years, they tend to ignore future possibilities. Besides, no attention is being paid to the linkages between different sections of any industrial unit."

This problem, in fact, became manifest during an accident in the Century Rayon plant in Kalyan (Bombay), which took place even as the study was being conducted. The MEF official says, "Carbon disulphide leaked from the plant. The acid wash unit was gravitationally connected to the carbon disulphide storage. During a sudden electricity failure, the automatic switchover to the diesel generator failed and the chemical spilled out. It flowed into the main drain and finally ignited, reacting with effluents originating from scores of neighbouring plants."

A chemical expert from NEERI says, "In an industrial belt, just a few units with good safety systems is not enough. An accident in any one plant can trigger off a series of accidents in neighbouring units, a kind of domino effect."

Subir Gupta sums up, "Risk analysis is still in its infancy in India. Aspects of quantitative and qualitative assessment are routinely ignored. The big plants can afford high investment in risk reduction; the medium scale operators cannot. But the economics of risk management has a logic of its own: risk reduces with rising investment till a plateau, beyond which investment keeps mounting but risk remains the same. This is where even big operators lose interest."

The situation in the small sector units is worrisome, too, although the hazards are more manageable. Says Chatterji, "In India, operational costs are much lower than capital investments. So small and medium units install inappropriate technology without proper risk planning."

Further, most small and medium scale operators have little access to the invaluable toxicity data of the chemicals they use. The checks on these industries were ridiculously negligible -- simply because the inspector of industries had no laboratories to analyse the chemicals.

Worse yet, attention paid to the transport or transfer of chemicals was at best glancing. A ministry official says, "Statistics show that 90 per cent of the accidents take place either during transport or transfer. Emergency plans at sites have usually been found critically wanting on this front."

The MEF took an overview of the study reports and the disaster management plans suggested by the consultants. Based on the overview, Risk Analysis (identifying the potential of damage and risk reduction measures), the constitution of First Response Teams (the first 10 minutes of an accident are a standard measure to decide whether it is going to explode into a full-fledged catastrophe), Communication Systems (inter-unit and with target area residents), and External Assistence were selected as major thrust areas.

On-site and off-site disaster management plans too were blueprinted. But response to the exercise was tardy. Barring Vadodara, mock drills to gauge the state of disaster preparedness were never held in any of the industrial belts. The amended laws have made it mandatory for drills to be held every 6 months and off-site emergency plans oiled and honed once a year.

Says Sengupta, "The documents were sent to the inspector of industries in different areas. As factory premises are under the purview of the Factories Act, the MEF could do little there. Still, district disaster management plans are ready for 8 industrial areas."

There is, of course, an auto-destruct button built into the amendment: what has not been rectified is the paralysing overlapping of powers among the various agencies, which has invariably led to delays and inaction. Sengupta, however, adds that an all-time non-bailable target has been fixed in the amendment. Manuals with guidelines for on-site and off-site disaster plans have been issued to this end.

Under the amended rules, inspectors in all industrial areas have been asked to carry out random checks on industrial activities annually and notify the MEF within 48 hours of the checks. It has also been laid down that industries will be informed about lacunae, if any, within an as yet unspecified stipulated time.

Sengupta explained the main features of the amendment: "To induce a greater sense of responsibility among those involved in industrial activity, key personnel handling risk reduction and disaster management have to be notified. In the hazard analysis, the type of accident, system elements and safety relevant components have to be listed. Even hospitals and other aspects of health infrastructure have to be listed."

People like Subir Gupta and Chatterji feel that the new set of rules might help reduce risks. But considering India's bumbling track record, the amendment could well turn out to be another disaster.