Despite protests, a tainted company tries to set up a fungicide unit 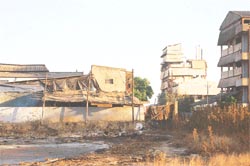 Until the 1980s, Bharatbhai Bhagat, a farmer who lives a kilometre away from the Sarigam Industrial Estate (sie) in Valsad district of Gujarat, had 600 mango trees. He had been selling 10 truckloads of mangoes every year. "Today, we have to buy the fruit, even for our own consumption," he says. Bhagat's story is no different from those living in villages near sie. The 450-odd industrial units, including 50 chemical units, have in 12 years contaminated the groundwater. And if villagers are to be believed, some units even use borewells to pump untreated effluents into the ground.

A recent Greenpeace study shows that groundwater in Sarigam is contaminated with organic pollutants such as tri-chloroethane, benzene and several organochlorine compounds. Benzene is a known carcinogen and dichlorobenzene is a persistent organic pollutant, which remains in the environment for a very long period of time.

Groundwater is the only source of drinking water for the villagers. "But use of groundwater results in health problems, ruins our crops and the land as well," says Prakash B Arekar, former sarpanch (head) of Sarigam village council. Arekar, along with fellow villagers, has been has been trying to bring to task industrial units responsible for contamination but without success.

A 1986-87 incident explains their failure. Seventy-year-old blind farmer Ganeshbhai Ambali's 1.2-hectare land was completely destroyed after untreated effluents from Ami Chemicals spilled onto his fields. "The company official offered me money. He said that was all I would get. He also said that since he controlled 32 inspectors of the pollution control board, I was small fry," recalls Ambali.

The current controversy over Sabero Organics, which deals with chemicals, is also a case in point. According to Rajendra Singh Jadeja, vice-president of the Sarigam Industrial Association, Sabero had been caught red-handed dumping untreated effluents in the open. The Gujarat Pollution Control Board served a closure notice to Sabero in 1999. The company is now seeking permission to set up a unit to manufacture the fungicide mancozeb. Anand Mazgaonkar of the Paryavaran Suraksha Samiti, a non-governmental organisation, says production of this fungicide has been banned in several industrialised countries in view of the health risk it poses: "Its usage could adversely affect the central nervous system and is a suspected endocrine disrupter."

In a public hearing held at the collector's office in Valsad on March 31, 1999, 100-odd people protested against Sabero's decision to set up the plant. However, some questioned the very idea of calling a public hearing when almost 60 per cent construction of the proposed plant had been completed.

"We have been cheated by our own representatives," says Arekar. In 1983, the Gujarat Industrial Development Corporation (gidc) acquired land in Sarigam for setting up the industrial estate . " Politicians played mischief with us. They had said there would only be engineering units in the area ," says Bhagat .But they declared it a chemicals zone."Now our area has become like a multi-storeyed building without any latrines and bathrooms," says Arekar."But we have to fight .Our future generation will curse us if we do not protect the environment now," he adds.