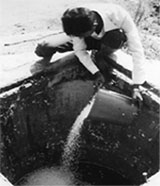 Rise in malaria cases has been a matter of great concern in Chennai. According to studies conducted by the mrc , the total number of malaria cases rose from 41,822 cases in 1995 to 45,930 in 1996. What is alarming is that cerebral malaria, an acute form of the disease which is a major killer, has registered a rise of 43 per cent during the same period.

About 70 per cent of malarial infection has been found in the central business area of the city. Roughly 2.2 lakh breeding sources contribute to mosquitoes in the city. According to a study conducted in 1996 by the health department of the Chennai Corporation ( cc ), 71 per cent of the water sources in the State Housing Board buildings are not protected from mosquito breeding. However, 1997 looked different.

According to health officials, cc 's seven-point programme indeed played a role in keeping malaria under control in 1997. One encouraging aspect of the plan is the introduction of bye-laws on construction projects, under which new constructions will only be permitted after health clearance is obtained from the Chennai Metropolitan Development Authority. It is compulsory for owners to deposit the expenditure to cc 's health department, which would be used for undertaking anti-mosquito measures in their premises. No building plan will be cleared if it does not fulfil the conditions specified in the Public Health Act. However, it remains to be seen if this approach proves successful over the long term.