Water trickles from it. Is it possible the wettest place on earth wants for water? That seems to be the impression, until L L Sorung, a teacher, confirms it is the truth. "We get water anytime between 7 to10 in the morning and 5 to 6 in the evening." But this is the logic of rationing. Water is being apportioned here 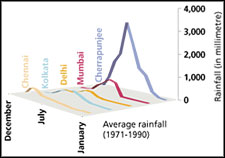 As the vehicle drives into Cherrapunjee, a huge notice greets it. "Welcome to the wettest place on earth". Sure it rains here (although that morning at 8 am there was a mild but persistent drizzle, cold light sleet in fact): 1,000 cm in a year. The Cherrapunjee line veritably leaps off the x-axis (see graph). How it rains here! For 5 months, from May to September, upon this land which is a plateau it rains. And the clouds gather woolly and bulbous, as they had that morning.

A long queue of women beside containers weaves away from an extremely dubious tap poking out of a gritty concrete post. Water trickles from it. Is it possible the wettest place on earth wants for water? That seems to be the impression, until L L Sorung, a teacher, confirms it is the truth. "We get water anytime between 7 to10 in the morning and 5 to 6 in the evening." But this is the logic of rationing. Water is being apportioned here.

This scarce commodity drizzles on.

The landscape is extremely deforested. "Barren' works here. But this ought to have been a forest. Regional ecology -- or is it a factiod once conned in Geography Part iv? -- demands a forest. Dampened but clear eyesight effortlessly militates against this notion.

I have come to Cherrapunjee in search of what clearly is a residual patch of forest: the canopy must have been quite extravagant here, once. The Ka Law Kyntak, Khasi for a sacred grove, I observe is miniaturised humid sub-tropical proof of that.

Here's what must have happened. The forest got cut. The rain was incessant. The topsoil was picked off by millions of runnels of water merely flowing away. What a slow mudslide happened here.

The water never percolated into the ground. With the forests and soil went the aquifers. Now it's all rock. The Goddess of Bangladesh has her bath in Meghalaya, goes a saying. It's literally true, for nothing holds back the water that falls on Cherrapunjee.

The only sacred grove surviving is the mawsmai sacred grove. The once-extensive humid sub-tropical forests developed on highly leached, nutrient-deficient soils. Acidic, their fragility was compounded by limestone deposits below. Their decimation turns the landscape into a degraded seral grassland, or -- as in the case of Cherrapunjee -- bladed landscapes.

The Cherrapunjee eco-system now stands desertified. The fact that shifting cultivation around Cherrapunjee remains banned by the village durbars is suggestive of the part played by such land-use in creating this extreme situation.

"A dam has been built," the sub-divisional officer maintains. "Once the dam starts working, the drinking water problems of the people will be solved." Snags have plagued the dam. The water treatment plant has not come up as yet and the water upstream has begun to get polluted. "Coal mining in the vicinity of the dam's upstream has caused this. It could render the dam unusable for drinking purposes. I had asked the public health engineering department to investigate the matter, two years back. But, they have not given a response."

The dam is silted. Stream water collects on the shallow reserve pond and trickles over. A pipeline exists, its pyramidal brick supports eerily similar to the ossuaries people here build to remember their ancestors by. It's rusted, incomplete and cannot carry water to the town.

Coal reserves in Cherrapunjee, in the Khasi hills: close to 19 million tonnes in a 36 square kilometre (sq km) area. Close to the sacred grove, 31.15 proven tonnes of limestone in a 1.40 sq km area.

This year the monsoon seems to be giving up early on Sohra -- Khasi for Cherrapunjee. It's late September and the onslaught is already over. The moisture hangs heavy. The mild continuous drizzle, people comment pensively, is a residue of the real monsoon. The real trouble lies ahead, in winter. "These streams that you see right now will disappear, recede far away and then we will have to walk several kilometres to wash our clothes." "The government's supply will be even more erratic."