..but that is not the end of problems for Ukraine, as answers to important issues' like the future of workers and alternate energy and monetary resources are still to be found 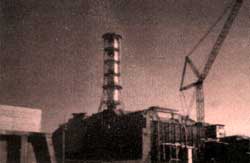 AFTER seven years of protracted negotiations Ukraine has signed an agreement in Ottawa with the G-7 countries (Britain, France, Germany, Italy, Japan, the US and Canada) and the European Commission on the closure of the Chernobyl nuclear power station. The agreement was signed in Ottawa by the Ukrainian economics minister Yuri Kostenko and Canadian deputy Prime Minister and environment minister Sheila Coppson December 15.

The closure of Chernobyl will be an Important step towards improving nuclear safety, not only in Central and Eastern Europe, but all over the world, " said Copps. Kostenko said that although the document was not legally binding, it was the first step towards a new partnership with the G-7 countries. The final compromise text of a Memorandum of understanding (MOU) had been thrashed out in Vienna at the end of November, after Ukrainian patience began to wear thin with what they saw as G-7 indecision and lack of commitment. The main stumbling blocks were the date of closure and the extent of Western financial support.

In November, an EU loan package worth US $95 million was arranged to supplement Ukraine's hard currency reserves and support its balance of payments. Before the final text was agreed President Leonid Kuchma and Prime Minister Yevhen Marchuk had insisted that the offer of just over us $2 billion in loans and grants by the G-7 powers was insufficient to shut down Chernobyl by AD 2000. Kuchma said that the offer was inadequate to cover the construction of a new sarcophagus around the ruined fourth reactor. Marchuk said if the West did not come up with us $4 billion Ukraine would proceed with modernisation of the two operating reactors (one and three) at the plant. Reactor four was destroyed in the 1986 accident and reactor two was closed in 1991, following a fire. However the total on offer is only us $2.307 billion in grants and loans and represents simply what had already been agreed.

Ukraine was able to sign because the final wording is open to various interpretations. "It is only an expression of good will and intent on part of the West," says a source close to the talks. It is deliberately ambiguous and makes it possible for both sides to claim victory." Some nice compromises were reached. The draft text was entitled Memorandum of Understanding between the governments of the G-7 countries and the commission of the European communities and the government of Ukraine on the closure of the Chernobyl Nuclear Power Plant by the Year 2000.Ukraineobjected to the date which is omitted from the title in the final version. It. still 'appears once in the text but a new paragraph offers flexibility by talking of decommissioning within the "shortest practically achievable time". Ukrairie's demand for aG-7 commitment to Compensation" for early closure also caused difficulties.

Ukrainian environment and nuclear safety minister Yuri Kostenko says that by 2000 only reactor shutdown will be possible. "Removal of the facility and ensuring its ecological safety will takeover a decade. Chernobyl will need tremendous sums for shutdown operations running into billions of dollars over many years. This is why Ukrainesees the memorandum only as the beginning". He adds agreements should be signed with every G-7 member obliging it to help Ukraine after 2000. If Ukraine remains alone, it will have to do as its economic and financial circumstances dictate.


As international pressure for the closure of Chernobyl grows the 50operatorsat the plant and their families are becoming fearful of the future. They know that nowhere else in the former USSR would they receive such high or regularly paid salaries and high standard of living. To attract the staff in the wake of the 1986 accident facilities at the new operators' town of Slavutich had to be better than average and wages had to be higher. The town built 50 kin from the plant with its population of 280issomething of a showpiece and boasts some of the best educational, medical recreational and community facilities in Ukraine. Finance for this comes largely from the plant itself which was given special permission to sell 50 per cent of its electricity directly to selected customers for foreign currency. After the1986accident most of the original operators were dismissed following a dispute over accommodation. Workers were evacuated and given temporary accommodation including flats in Kiev, until Slavutich was ready. Slavutich was ready within two years but this initially caused problems as the operators did not want to give up their flats in Kiev -accommodation in the capital is valued. Against the advice of the plant management the government decided to dismiss those who would not move and the plant lost 90 per cent of its work force, posing a serious problem for plant director Sergei Parashin. "This caused a difficult period of conflict between the staff and the administration and some vestiges still remain", he says.

The plant finances all the town's sports and leisure facilities including five gyms12swimming pools two stadiums a yachting dub and horse-riding stables. The facilities employ 230 people on a full time basis and the plant sends$100a day to maintain this service. The plant management understand that they need physically healthy people and staff who can be confident about their children, says Vasily, Korobov, the head coach. "We faced a difficult time after the collapse of the USSR in 1991explains hospital director, Viktor Shilenko. But the plant has been giving us help for the past two years. The management understands our economic problems and gives us what we need. This year in addition to budget support we have received everything we asked for and more to buy equipment." The new hospital - the centre of a sophisticated medical complex- has just been opened. The mayor of Slavutich Vladimir Udovichenko, is angry at the suggestion that the nuclear plant should be closed. "The West doe snot understand that it is impossible to take away from Ukraine $200 million a year (the plant's income) and 5 per cent of its electricity. We should not even discuss it. It can't happen he says. He is proud of the town's achievements. Eight years ago no-one from Kiev wanted to come here at all but for the past two years we have been getting requests from people in Kiev seeking to swap accommodation." But if the worst happens and the plant is shut down, he adds, "will not sit idle - we will do everything to attract investors including establishing a free economic zone. No one here expects the town to die. Some budget tightening may be necessary very soon as the plant's quota for free sale of electricity has been cut to nine per cent for the duration of the winter. "With Ukraine suffering an energy crisis and people without heating in Kiev Chernobyl's power must be channelled to where it is needed most, "explains one plant official. "We understand this but we don't know what will happen after the winter."

An international conference in the operators' town of Slavutich last December revealed that radiation above the -entombed reactor four measures up to 46 roentgen per hour- the same levels recorded during construction of the sarcophagus immediately after the April1986accident. At the end of last year the plant was made directly responsible for all work relating to maintaining and strengthening the sarcophagus. Previously this was organised by the special ministry for Chernobyl but pressure has been mounting for this ministry and the transfer of its functions to other body. "The Chernobyl sarcophagus is a global problem. It cannot be solved piecemeal. We need to bring together the best experts the world has to offer, "says Xavier Gorge, senior vice president of the French company SGN Reseau Eurisys.


New regulations have been adopted restricting access to the 30-kni exclusion zone around the Chernobyl nuclear power plant. They deny access to anyone under -18 in an attempt to end visits by children to parents and grandparents who have refused to leave. After the accident some 116,000 people were hastily resettled but some have since returned preferring the risk of ill health to the problems of making a new life-away from their homes.

There is no longer any doubt that the massive, increase in thyroid cancers in Ukraine, Belarus and Russia are radiation induced, as a result of the Chernobyl accident, but the mechanism still requires more research. This was one of the conclusions of the World Health Organisation's international conference, held in Geneva at the end of last year, on the health consequences of the Chernobyl and other radiological accidents. It looked mainly at the results Of WHO'S international programme on the health effects of the Chernobyl accident (IPHECA), the first phase of which ended last year. Wilfried Kreisel, executive director in charge of WHO'S environment and health issues says: Who wants to see the volume and quality of medical assistance and scientific research increased. We will be doing a disservice if we fail to extract any benefit for mankind from this monumental human tragedy. If history is not to repeat itself we should learn the lessons of Chernobyl well."