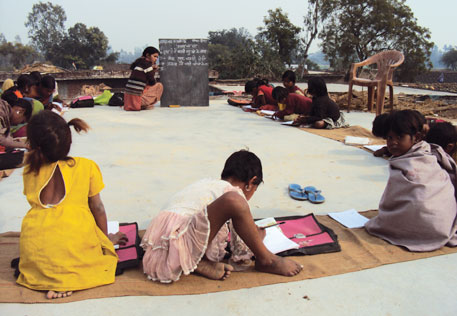 It was something unusual for the residents of Nakahi in Shravasti district. On January 7 when Fatima’s husband and his parents came to the village to perform gauna and take the seven-year-old bride along with them, her parents refused. Fatima was married off to Bakridi Khan when she was three months old. Gauna is a custom prevalent in northern India, in which the groom after several years of marriage goes to the bride’s house to bring her along to begin conjugal life.

Fatima’s daily wager parents owe this change to an initiative by non-profit Developmental association for human advancement (Dehat) to educate girls in this district in Uttar Pradesh, bordering Nepal. According to the Planning Commission, Shravasti is one of the 100 most backward districts in the country. Based in nearby Bahraich district, Dehat set up education centres in 36 villages of Jamunaha block two years ago. Since then the daily routine of girls in these villages has changed. Instead of staying indoors, doing household chores and taking care of younger siblings, or going to the fields to collect firewood, every morning these girls march to Dehat’s education centres. They are the first generation in their families to study.

In Nakahi, every day around 35 girls assemble at the centre, which is nothing more than the roof of a house. Aged between four and 15, most of the girls are married. The class begins with a motivational prayer, after which they spread out mats to sit upon. One of them places the blackboard in front. Shahmina Rizvi, their 18-year-old teacher asks the date and the day; the girls answer in chorus. Then she writes some maths sums on the blackboard and asks them to solve. The students start calculating using their fingers.

Nine-year-old Rekha Devi is the first to solve the sums. Rizvi checks her notebook. All the answers are correct. Rekha is the next child teacher of the centre. 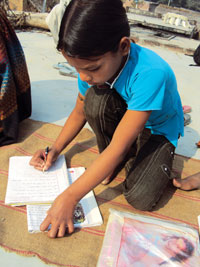 Dehat follows a novel teaching method. Every month three girls from a class are chosen to teach the rest of the girls for a month. During this month, the child teachers also train three other girls from the class to replace them in the coming month. “This gives every girl the opportunity to teach. It builds their confidence and the ability to take charge,” says Rizvi. “Our approach is holistic development.” Asked if they have learned anything beyond text books, the girls reply instantly: personal hygiene, eating nutritious food, importance of iodine and iron, breastfeeding, first aid care and playing.

“All the girls in the class used to chew tobacco when the centre was established. They have quit the habit,” says Rizvi. When asked the reason, the girls reply: “It causes cancer.”

That day after the class Rizvi visits Rekha’s house as part of her daily routine of visiting five families in the village. The aim is to keep the families motivated so that they allow the girls to continue their education.

Rekha is a promising child. After completing class V from the centre she plans to take admission in the inter college (from standard VI to XII) in Tulsipur town, some five kilometres away. She has requested her father to buy her a bicycle. But Rekha’s family is reluctant. “We worry about her security. We shall allow her only if there are enough girls accompanying her to the inter college,” says Parmeshwar Pratap, Rekha’s father.

Rekha is the only one in her family of nine who is studying. She does not want to tread the path of her mother and elder sister. Her mother got married at the age of 10; her elder sister, Phoolmata, at 13. Now 16, Phoolmata was recently abandoned by her husband and lives with her parents.

Rizvi says the very fact that these girls are coming out to study is a big change in the village. The change in the attitude of parents has already started and the day is not far when they will encourage their daughters to study outside the village.

The journey so far has not been easy, neither for the girls nor for Dehat. 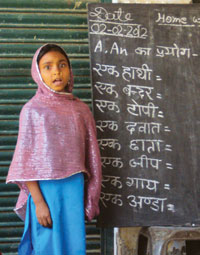 “I immediately thought of doing something, and I knew it was to educate the girls.”

Chaturvedi set up a team and travelled across the block. Though the names of boys and girls are registered in schools, it is only boys who attend classes. “We did a household survey, which showed 90 per cent of the girls have never been to schools,” he says. Even those who did, discontinued after they turned six or seven. In Jamunaha, girls past that age are considered mature who should only do household chores. Those who are married are considered the keepsake of groom’s family till it comes for gauna and hence are asked to stay indoors. “We had a difficult time breaking this mindset,” says Rizvi. She used to visit households everyday to convince the parents. “I used to tell them the importance of education and being independent,” she adds. It took months of persistent persuasion for Dehat activists to finally get some girls to the centre.

As it was financially difficult to construct a building in every village, the members of the foundation spoke to the families if they could provide some space in their homes every day for holding classes. Initially they resisted, but later agreed. Now these centres run either on the roofs of houses or in front of a closed ration shop. The foundation joined hands with Gurgaon-based non-profit Iimpact to fund the books and stationery required for the centres. Set up by the 1978 batch students of the Indian Institute of Management, Ahmedabad, Iimpact finances development projects. The foundation has adopted the syllabus of state government to mainstream the girls’ education in future. Uttar Pradesh education board has a provision in which a child who has studied at home till class V, can write the state board exam and then take admission in any government middle school.

Recruiting teachers was another difficult task. “The most important quality we looked in a teacher was motivation and attitude because teaching in these villages is a challenge,” says Chaturvedi.

But Dehat activists faced the real challenges after the girls started trickling in to the centre. Every day after the class the girls would play to stay physically fit. The village elders found this uncouth. Some complained to the parents saying that their mature daughters were jumping and laughing fearlessly.

“Soon we realised that it is important to involve family members in the initiative and sensitise village elders. We formed Balika Shiksha Adhikar Samiti with the girls’ parents as members,” says Chaturvedi. Every month a meeting is conducted where issues related to education and development are discussed. Many parents admitted their daughters in the centres later when they understood the importance of education.

Changes are already visible. It is the result of these meetings that Fatima’s father could broaden his horizon. Today, he has taken upon himself to talk other parents into rejecting gauna if their daughter is minor and uneducated.