Rising cases of respiratory ailments in children, due to air pollution, fail to stir the Indian government 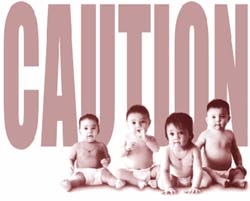 Children, in developing nations, face grave risk from air pollution. These are the findings of a report published by, the Washington-based, World Resources Institute ( wri ) . The report studies the risks to children from air pollution in urban outdoors. Nearly a year after the publication of the study, the Indian medical community continues to be in deep slumber. R S Dhaliwal, senior medical officer at Indian Council of Medical Research ( icmr) , says, "No action plan to study or analyse the link between the health of children and air pollution has been developed by the government."

The wri study, based upon pollution levels in 1993-95, says the exposure of a large numbers of children to heavily polluted air in developing countries has skyrocketed in recent years. For the simple reason that more people now live in urban and industrialised areas than in any time in the past. This is also due to the fact that migration from rural to urban areas is higher in developing nations. In the 1950s, New York, usa, was the only city in the world with a population exceeding 10 million. Today, more than 21 cities have a population of 10 million or more, and as many as 18 of these are in the developing world. Currently, the population growth rate, in urban centres of developing nations is, roughly, four times that in the rural areas.

One must take into consideration the fact that the wri study is based on data from 1993-95. The air pollution scenario, in many developing nations has deteriorated since then. The risk, therefore, might be more than that projected. Compare the size of the threat with the lack of interest shown by the Delhi Medical Association and the Indian Medical Association. Officials of both the institutions refused to respond to repeated queries of D own To Earth . It leaves one wondering if they believe a national action plan for children's health, if any such does exist, is a state secret. One, lone, source of information is the Kalawati Saran children's hospital, in New Delhi. The data provided to Down To Earth indicates a frightening jump in the incidence graph of respiratory diseases in the capital, in the last couple of years. The hospital admissions for bronchial asthma as well as bronchiolitis show tremendous rise in the past few years(see graph: Rising trends). The data, drawn from hospital admission records, does not include the number of patients who visit the outpatient department daily. Unfortunately, city-wise data on the health of children is not routinely maintained in this country. But, Calcutta, Delhi and Mumbai are placed after Mexico city in wri's list of cities with the most number of children at risk.
Children, face a greater risk from air pollution, a child's organ system continues to develop through its first few years of existence. A child's lung, for example, grows most rapidly in the first two years of life and continues to grow until the late teen years. "Children tend to absorb pollutants more readily than adults do and retain them in their systems for a longer period, making them more susceptible," says Devra Davis of the wri . Also, children breathe at a faster rate than adults. A three-year-old child, for example, takes in twice the amount of air that an adult inhales per kilogram of body weight. The risk to children is, therefore, far greater.
As early as 1992, the World Health Organisation ( who ) had said that, in the developing world, air pollution had caused chronic cough in at least 50 million children aged below 14. who reports that now more than 80 per cent of all deaths attributable to air pollution-induced lung dysfunction occur in children in developing countries, aged below five. As urbanisation occurs, more children will be exposed to hazardous pollutants in the air, driving the proportion of serious respiratory illness upward.

Research findings from all over the world clearly establish that children in countries, like India, are looking at a bleak future. In a study reported by wri, it was found that those living in areas with greater exposure to particulate matter sized below 10 microns ( pm 10) encounter a 45 per cent higher risk of dying from respiratory illness than those living in less polluted areas. Another study, called 'Air Pollution and Infant Mortality in Czechoslovakia', found an increase in infant respiratory deaths associated with pm10 level of pollution.

The scientists of the University of North Carolina at Chapel Hill, in usa, discovered that while older adolescents and adults inhaled and retained more particles because of their larger lungs, younger volunteers for the study retained about 35 per cent more air pollutants per unit of lung surface area.

Unfortunately, extensive studies on the issue do not exist in India. What one can get is an odd comment from experts on the link between air pollution and children's health. H B Mathur, professor emeritus in the Delhi College of Engineering, says of Delhi, one of the three Indian cities mentioned in the wri report, "The benzene level in unleaded petrol is high in Delhi. The air is bound to have a high content of it (see 'Environmental injustice', Down To Earth , Vol 9, No 12; November 15, 2000). Benzene is carcinogenic. This could lead to an epidemic of childhood cancer in the city." Extensive epidemiological studies have not been carried out in India to determine the effect of vehicular pollution on child health. "The data available is too limited to make any conclusive statements," says Varinder Singh, of the pediatrics department in Kalawati Saran Children's Hospital.

Singh says, "Every family has at least one or two members suffering from respiratory disorders at any given time. One cannot attribute this to anything else but the intensifying problem of air pollution." But with no hard statistics to back up what their experience tells them, the doctors tend to dither while stating the obvious. Down To Earth looked at the seasonal variation in number of emergency cases reported at Kalawati Saran children's hospital for respiratory problems. During the winter smog, the number of reported cases are reported as high as 30 per month, nearly twice of that reported in any other time of the year. One may be sceptical of coming up with quick conclusions, but the correlation obviously exists to be investigated. S K Chhabra of the department of cardio-respiratory physiology in Vallabhai Patel Chest Institute, New Delhi, says, "The smog in the air is harmful because of its particulate content. It is definitely choking our children today."

The National Institute of Occupational Health ( nioh ), based in Ahmednagar, is the one institute performing research on child health and air pollution linkages. Says H N Saiyyed, director of nioh. "We have programmes to deal with lead poisoning in children." But he admits, "We do not have an action plan." It will take more than a programme here or a study there to help the children to walk the city streets without danger to their health or life. The wri report should serve as a wake up call for the medical community in India and other developing nations.