Of late, honey is being associated with shady dealings, crime, and and a thriving illegal trade spanning the globe.

One may wonder why honey, a natural product, is shipped illegally. The reasons become clear if one considers the stringent food safety regulations in Western countries and questionable beekeeping practices in the countries that produce and export the natural sweetener.

Around 2002, Australia witnessed major honey imports from Singapore. The city-state, cobbled together with concrete, has neither bees nor beekeepers. Yet, it shipped some 1,447 tonnes of honey to Australia in 2002, according to a report of the country’s Rural Industries Research and Development Corporation. Investigations by the Australian government revealed the honey from Singapore was being transshipped or re-exported to the US from Australia. Further probe revealed the honey was not produced in Singapore but re-routed by China. Australia received some 2,228 tonnes of honey from China and Singapore, almost all of it bound for the US shores, in 2002. This was far more than what Australia had been importing. 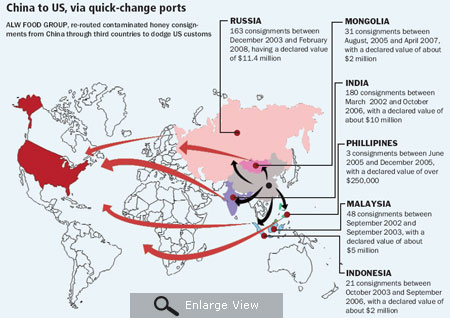 In 2000, Chinese exports to Australia was some six tonnes. After the US erected trade barriers against Chinese honey in 2001, by levying higher import duty, Chinese exporters began to re-route their consignments through third countries. They changed labels on the consignments to show a different country of origin to dodge US customs. This practice, in popular parlance, has come to be known as honey laundering.

Events preceding the Aussie investigation show why the laundering began. China is the biggest producer and exporter of honey. In 2001, it produced 254,359 tonnes of honey, three times the amount produced by the two other top rankers, the US and Argentina. China also led in exports, commanding a 29 per cent share. Most of this honey went to the US and EU (See table). In the honey trade, there are two distinct groups of countries: consumer countries like EU and the US and others like China, Argentina and Turkey that produce close to half the world’s share of honey. In 2001, the US consumed nearly 185,000 tonnes of honey but produced just half the amount; Germany consumed about four times of what it produced. On the other hand, China and Argentina have little domestic consumption and export most of what they produce.

Chinese honey is one of the cheapest in the world. In 2006, when Chinese honey was selling internationally at about US $1,300 a tonne, honey in the rest of the world cost 50 per cent more. This was because Chinese beekeepers tap honey before it matures. Beekeepers collect honey before the honey flow period which results in high moisture content, an indicator of poor quality honey, said Ma Lun-jiao of the College of Economics at Yangste University in Jingzhou in China, in his study on export competitiveness of Chinese honey, published in 2009.

Chinese exports took a hit in 2002, when its honey was found to be tainted with the antibiotic, chloramphenicol. Border custom inspectors in some EU countries and Canada detected this antibiotic which is a potential carcinogen; about 30 such consignments were detected in Europe. Other broad-spectrum antibiotics like streptomycin and tetracycline and pesticides like lindane, were also found. The same year, EU banned all honey imports from China.

This was followed by complaints from domestic honey growers of the US, including the American Honey Producers Association, who said the Chinese were dumping cheap honey in the US. The Chinese were accused of undercutting honey prices by about 150 per cent which led to the US Department of Commerce slapping an anti-dumping duty of 221 per cent in 2001.

After 2007, the anti-dumping duty was fixed at $ 2.06 for every net kilogramme of Chinese honey imported into the US. Export figures from Food and Agriculture Organisation showed that Chinese exports fell because of EU ban and the US duties, from 106,868 tonnes in 2001 to 76,678 tonnes the following year. This set the stage for illegal shipment of honey.

A charge-sheet by the US Department of Justice against a major raw food material supplying company gives details of how Chinese exporters with the help of the European importer conned the authorities (see map on facing page). The importer, Alfred L Wolff Gmbh (ALW), has its offices in Hamburg, Chicago, Beijing and Hong Kong.

In May 2008, the US justice department arrested two senior officials of ALW. It led to the arrest of four Chinese nationals from Seattle and Chicago. The testimonies of these locked-up executives showed that between 2002 and 2009, the company illegally imported more than US $40 million worth of Chinese-origin honey to avoid antidumping duties of about US $80 million. This included re-routing thousands of tonnes of honey through countries like Russia, Indonesia, Thailand, Malaysia, Mongolia, Philippines and even India. Blending and filtration was done to avoid detection. Investigations revealed the company instructed its employees not use their e-mail for discussing trans-shipment, and use more secure services like Skype. While talking over the phone, employees were told to speak in German.

All money transfers were made to their Hong Kong office that acted as an intermediary between the Chinese companies and Chicago office. Six different companies were involved in this racket including one from India. On September 1, 2010, the US justice department, charge-sheeted this group of 21. Of them, 15 are individuals, and the rest are corporate entities. The names include Alexander Wolff, the CEO of ALW between 2003 and 2009, and the two arrested ALW executives Stephanie Giesselbach and Magnus von Buddenrock. A Chinese exporter of Hebei province has been indicted. Arrest warrants are out against nine indicted persons.

The charge-sheet revealed that the laundered honey had passed through India. The Indian company that allegedly helped ALW is referred to as the “Indian trans-shipper” that allegedly exported Chinese honey under the guise of Indian honey, worth over US $10 million, between 2002 and 2006. The biggest order supplied by the Indian exporter was 48 containers of honey worth a little over US$ 1 million sent to the US between August 28 and October 18, 2004. E-mail communication between the Indian company and ALW executives revealed the Indian company just shifted the honey from one set of drums to another before shipping it.

In an expose titled ‘Honey laundering, a sticky trail of intrigue and crime’, the Seattle Post-Intelligencer, in December 2008, accused a honey exporter of New Delhi of sending Chinese honey to the US. About 350 drums containing 223,300 pounds of Chinese honey were shipped from Hubei Yangzijiang Apiculture Co. in Wuhan in China to the Tuglakabad container depot in New Delhi. It named the company as Apis India Natural Products. The load was to be shipped to America’s oldest and biggest honey cooperative—Sue Bee Honey, in Iowa, the newspaper said.

The involvement of Indian players in this trade is still unfolding.

With inputs from Rajil Menon, Mumbai