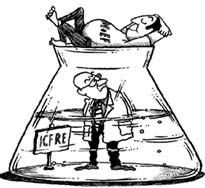 walking through the corridors of the heritage building of Forest Research Institute ( fri ) and Indian Council of Forest Research and Education ( icfre ) in Dehradun one cannot but be impressed with the colonial architecture. The sprawling campus with its pine forest, rare and exotic trees and numerous birds, such as the black-headed oriole and the green-backed sunbird, is a marvel. But it takes more than an impressive building to create an institution. Sadly, icfre is losing its relevance as an institution of repute and value.

icfre is the governing body for all the forest institutes in India. The head of the organisation is called the director general ( dg ). But till very recently the organisation did not have any one holding the charge independently. For two years, its director general continued to shuttle between Delhi and Dehradun. M K Sharma, who held the post, was simultaneously the additional inspector general of forest in the Union ministry of environment and forests ( moef ). For two years, the government, in its wisdom, decided not to, have an independent head for institution. Quite like having a single captain manning two ships in troubled waters. A constantly shunting head of institution means bad administration. " icfre is a large institute. There are crucial cases that need approval from the director general. The institution cannot afford such a situation," says a forest official at the extension division of fri.

icfre has suffered from problems of management for a while now. A single term of the dg is supposed to last for five to eight years. But, seven dg s have come and gone since the inception of the council in 1986. An average tenure of two years. Like Sharma, others have also simultaneously held other posts. "From the inception of autonomy till 1995, none of the dg s have completed their terms," says a scientist at fri. H e adds, "this ad hoc approach at the top management level has ruined the council." Even Sharma agrees that this can be a hurdle to efficient management. "Research is a long-term issue and with short periods of deputation, there is no continuity," says a retired official of the moef .
The icfre was formed in 1986 and given an autonomous status in 1991. As an umbrella body, it governs the functioning of 11 other centres of research all over the country. The idea was to give research a fillip. That has not happened. "Earlier, most research work on forestry in India used to come to fri. It catered to the needs of the state forest departments," states a senior ecologist at fri . But now, he laments, non-governmental organistaions are approached for consultation."

The institution has been caught in controversies ever since, in 1991, it gained autonomy. For creating an autonomous institution, the employees were asked to agree to, accordingto a senior scientist, a tripartite agreement between the employees, the management and the government. But, till 1998, over 800 employees refused to sign on the dotted line. The moef , it is alleged, tried harsh tactics to make them accept the autonomy package. The moef issued notifications stating that employees not agreeing to the agreement would be regarded as "surplus staff". This meant they could be thrown out of their jobs anytime. A government notification put it, rather euphemistically, that such employees could be "re-deployed at any time" and in a threatening note added: "their refusal (to join) nullifies the sincere effort for the smooth functioning of the organisation."

The Van Anusandhan Sansthan Karmchari Sangh, a union of fri workers, approached the moef for a copy of the resolution making icfre autonomous. The ministry said: "the resolution is not available on the records of the ministry". When approached by Down to Earth, the secretary, moef, refused to speak on the subject.

To add to the woes of the employees, only Rs 17 crore of the Rs 50 crore envisaged for the pension fund is currently available. And the icfre has to also bear the burden of paying pension to all Indian Forest Service ( ifs) officers on deputation to the institution. And, the number of ifs officers on deputation is not going down. To the contrary it has risen from 8 to 85 since the inception of icfre .


There is not much love lost between the scientists in fri or icfre and the ifs officers on deputation. The dg 's post has been the exclusive domain of the ifs officers for the past fifty years. A scientist has never headed the council. Not that the rules do not allow it. But the dice is loaded in favour of the ifs officers. A scientist, to qualify, needs to have cleared his post graduation in first division, going on to do his PhD just as well. Then he must have spent 25 years as a group A scientist. He reaches the group A level after 10-15 years of service. The ifs officer simply requires a 25-year service period, which is not essentially spent in research. Unlike the scientists, he is not required to prove any research capabilities.

M K Sharma explains that ifs officials are the ones selected by a screening process while scientists are mainly the ones that are left behind when Union Public Service Commission examinations are conducted. He feels the criteria are fair enough and that there is no reason for scientists to complain.

The scientists are treated as second rate citizens for filling up all other administrative posts as well, accuse scientists. The board of governors of icfre is made up of 21 members. In this national research guiding body, currently only three are scientists. M K Sharma says this is so because no scientist is suitable for the post. This, scientists say, is a baseless charge. Sharma's reaction is only a reflection of the rift between the scientists and forest officials. And the rift is not a secret. "The confrontation has been going on for a long time," says Upendra Arora, owner of Dehradun-based Natraj Publications, retailer and publisher of books exclusively on environment.

Murmurs increase to protestations when posts are created to absorb more ifs officers into the organsiation . Recently, a post of an additional director general (information management) was created, undermining the chief librarian. Sharma, the dg then, has this logic to give for appointing somebody who has no experience of library science as the head of the library: "The librarian was told to buy books written in the vernacular as well as English. He did not. So we placed the ifs officer above him."


The scientists at icfre have also suffered during assessments for promotion. According to the 'flexible complimentary scheme' of the Fifth Pay Commission, promotion is strictly based on the annual confidential report ( acr ). For the scientists to get promoted, they requires 85 per cent and above excellence level in the acr for five years at a stretch. "It is near impossible for any scientist to achieve the level of productivity demanded," says a respected senior scientist at the silviculture division. He mentions that such methods of assessing performance are not used in other scientific institutions. not even the Indian Scientific Research Organisation, an institution renowned for its achievements.

To make things worse is icfre 's standing order Number 4, of August 29, 1999. The scientist is required to, according to the order, to route all his research papers through the dg and the respective department head. Without the permission of the dg, an academic paper can not be published in any journal. When all institutions under the government are talking about doing away with complicated procedures, icfre seems bent upon making them more cumbersome. Its another thing, that each journal has its own set of advising peer scientists and editorial board who sift through each submitted paper before publishing it. The number of papers published by a scientist is included for his annual assessment in his acr. The standing order, therefore, places the future of the scientists in the hands of the ifs. No wonder most of the scientist Down To Earth spoke to wish to remain anonymous. B L Dhar, a retired scientist from the forest soil and reclamation department in fri , says, "No research institute can flourish unless the scientist community feels involved." R M Singhal, deputy director general (research) tries to put up a weak defense for an indefensible order. He claims screening is necessary in order to keep up the technical standard of research and also to check if it has any financial or commercial potential. S K Sharma, says, "some scientists have been making money (on the sly) from their research."

The great obstacle race continues for the scientist of icfre. The notification No. 16-28/91 of icfre states that the departmental review committee has to assess scientists for promotion twice a year, before 1st of January and 1st of July. But scientists claim interviews have not been held for almost two years. Even the board of icfre has not been meeting once or twice a year. Regulations demand at least four a year.


While the skirmishes between the ifs officers and the scientist community continue, research suffers. There is even difference of opinion regarding the focus of research. Scientists claim propagation of monoculture is behind many of the current problems faced by forestry, such as the large-scale decay of Sheesham ( Dalbergia sissoo ) in Madhya Pradesh. An ecologist at the forest ecology and environment division adds that the lack of dailogue between the state forest departments and scientists is also the reason for decline in forest cover. He states that the state forest departments do not utilise research conducted although the institution works for them. However Sharma believes the priority is wasteland development. He says, "India imports wood worth Rs 9,000 crore. There is an urgent need to grow fast growing species to meet the demands." He mentions that the icfre is doing extensive research to improve the growth and quality of the exotic species. Evidently, a coherent vision is missing.

Most scientists agree with the fact that the institution has remained unproductive for a long time. "Though Indian scientists from other fields are well known for their expertise, one rarely hears of any forest science experts from India," says Dhar. S C Sharma, head of forestry ecology and environment division of fri adds, "We lag behind by at least 20 years as far as scientific progress goes. We are in no position to recover right now." He complains: " fri being the main research institute, should be the most productive, but it fails to compare with even other institutes across the country." R K Singh of the Himalayan Forestry and Heritage Centre at Dehradun, "the best way to deal with the situation is to let the forest officials do their work and brook no interfere in the research activities of the scientists." He also points out: " India cannot create an infrastructure like the fri , so we cannot afford to destroy it at the cost of inefficient management." Words of advice, for the moef and the administration of icfre.