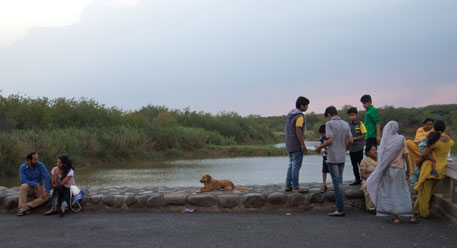 WITH WIDE roads, abundant greenery and self-sufficient sectors, Chandigarh has the distinction of being India’s first planned city. Residents attribute this success to strict building laws and the absence of haphazard construction. Some even claim the city has no slums. The real picture, however, is not rosy.

In the last two decades, an increased demand for labour has led to a large-scale migration to the city, gradually resulting in the proliferation of slums. The original plan of Le Corbusier, the French architect who designed Chandigarh, did not make provision for slums. To keep in tune with the master plan, the administration is now evicting slum dwellers. Nine of the 18 slum colonies have been deemed illegal and served with eviction notices.

Slums are not Chandigarh’s lone challenge. The administration is also locked in a legal battle with the Punjab government over the construction of a private multi-storeyed housing complex very close to its only wildlife reserve, the Sukhna Wildlife Sanctuary.

In both the cases, the administration has stressed on the need to maintain the population density, as Corbusier had intended.

Clearly, the planned city, which enjoys the official status of a union territory, was not prepared for changes that are sweeping its demography and geography.

A glaring contrast
In Kansal, a bustling village in Punjab bordering Chandigarh, private real estate offices have sprouted in every corner, offering attractive discounts to property buyers. The two administrative units, separated by a 15-feet road, are a sharp contrast. On one side is a tree-lined avenue and on the other, buildings that have mushroomed everywhere. A real estate broker from the village says that property prices have increased six times in anticipation of a luxury residential project planned by Tata Housing Limited in Kansal. “This road will have two lanes or may be four,” he says when asked how residents of the proposed housing complex, also called TataCamelot, will commute. 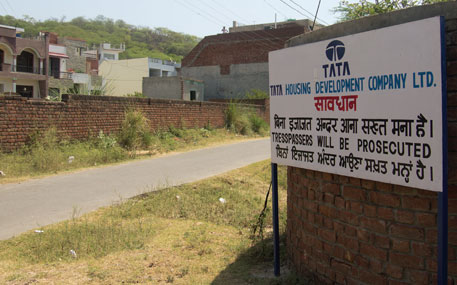 He stops as the road curves and points to a large plot of land, dotted with single-storey houses on one side and a thick forest surrounded by the Shivalik range on the other.

“This is the best view one can get in this area,” he adds. As the road takes a sharp turn to enter Kaimbwala village, which comes under Chandigarh, the contrast becomes sharper— houses follow the building code of the planned city and open green spaces dot the landscape. The building code of Chandigarh restricts citizens from constructing more than four floors in residential areas of the city, which has been divided into zones on the basis of population density. “Punjab encourages people to build houses, while Chandigarh wants to protect its forests,” the broker explains.

Everything but the master plan
Spread over 54 hectares, the Tata Housing project consists of 19 towers, ranging from 12 to 35 floors, with an initial project cost of Rs.1,800 crore. According to Hash Builders, Tata’s Chandigarh-based contractor, a threebedroom apartment costs Rs.1.53 crore. 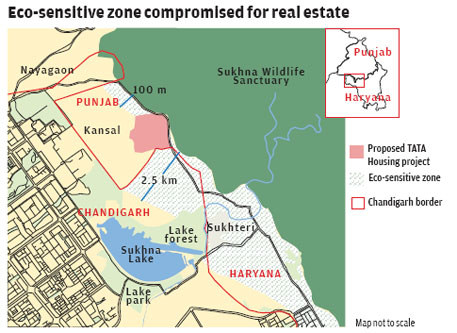 Conceived in 2006, Tata Camelot is everything that Corbusier’s plan for Chandigarh was not. The Frenchman designed Chandigarh based on the structure of the human anatomy. According to his master plan, the northern part of the city is the head. He wanted minimum human activity in this part, although some of the main administrative offices and courts, such as the Punjab-Haryana High Court, were set up here. Corbusier had planned an artificial lake in Sukhna, with the Shivalik range in the backdrop. As Tata plans its housing project, Chandigarh’s residents have gone to court to save the city’s green areas, with the support of the Forest Department.

In 2010, when Tata applied for a clearance for the housing project, the Punjab government gave a green signal. But 16 prominent citizens from Chandigarh, including former high court judges S S Sodhi and Kuldip Singh, challenged the decision in the Punjab and Haryana High Court, which approved the government’s clearance. In August 2013, they filed a writ petition in the Supreme Court on behalf of Sareen Memorial Foundation, a Chandigarh-based non-profit, against the high court’s order. In October 2013, the Supreme Court asked Tata to maintain a status quo and remarked that “even a brick should not be laid in the area”, and thereafter remanded the case to the Delhi High Court. The Chandigarh administration told the high court that political and business interests influenced the Punjab government’s decision to clear the project. The forest department stated that the land on which the project has been planned is owned by sitting and former members of Parliament and members of the Punjab Legislative Assembly. The Delhi High Court is expected to hear the case on July 15. Down To Earth tried to contact Tata Housing Ltd., but there has been no response so far.

Forest Department's firm no
According to officials in the Forest Department, the project will affect both the Sukhna Lake and the Sukhna Wildlife Sanctuary. Officials contend that despite the Periphery Act of 1956, the Punjab government has been encouraging construction around Chandigarh. The Act states that up to 16 km of the area around Chandigarh has to follow the building code of the city.

The forest department has accused Tata of hiding crucial facts about the proximity of the project to the wildlife reserve. “Tata Housing did not disclose the existence of the Sukhna Wildlife Sanctuary, which is 123 metres from the project site,” the petition states. While Chandigarh has defined 2.5 km around the sanctuary as eco-sensitive, Punjab has, over the years, reduced the eco-sensitive zone to just 100 metres. “If Chandigarh’s formula of eco-sensitive zone is applied to Punjab, all the existing and proposed construction in Kansal will be deemed illegal,” says Santosh Kumar, chief wildlife warden of Chandigarh.

Officials have opposed the project on other grounds as well. The environmental impact assessment estimates that the project will guzzle 1,615 kilolitres of water every day. The Chandigarh administration claims it will adversely impact water availability in adjoining villages. Moreover, to keep in tune with the master plan, the administration has demarcated villages such as Kaimbwala as a lowpopulation density zone with 60 persons per acre (0.4 hectare), but with the housing project in place, the population density is likely to go up by 300 persons per acre, increasing the pressure on land.

According to Kumar, the project stands on the catchment area of Sukhna Lake, which blocks the water flow. While seeking environmental clearance, Tata Housing Ltd stated that there were no water bodies within a 10 km radius of the proposed site. Survey of India maps produced in the Supreme Court last year clearly showed Sukhna Lake at a distance of 1.5 km.

Failed quest to emerge slum-free
If Chandigarh’s master plan has inspired the administration to protect the city’s only lake and wildlife reserve, it is the same plan that has proved disastrous for the city’s poor residents. In its aspiration to emerge slum-free, Chandigarh has been trying to map illegal encroachments since 2006. The administration conducted a biometric survey that year to determine the number of people living on government land across the city so as to facilitate construction of houses for the poor on the outskirts under the Jawaharlal Nehru National Urban Renewal Mission (JNNURM). To allot a house under JNNURM, the administration has made biometric documentation mandatory. But a faulty survey methodology has rendered an estimated 50,000 poor homeless, as their names did not figure in the records. The same people have been issued voter identity cards and bpl cards by the
administration. 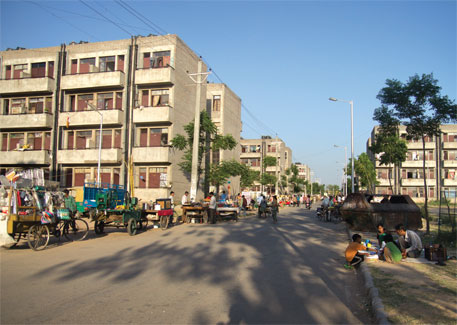 Radhey Shyam, a resident of Kajheri Colony, which was demolished on May 10, was one of the many slum dwellers who was not included in the biometric survey. “The surveyors never visited our colony despite several petitions to the Estate Office,” he says. The Estate Office is responsible for the disposal of commercial and residential properties in the union territory. For Kunti Devi, a resident of Janata Colony, which was served an eviction notice last month, renting a house for Rs.2,000 to Rs.3,000 is expensive. “During monsoon, our houses are flooded with water and walls collapse. We are more than eager to move out, but where do we go?” she asks.

According to the Estate Office, out of 70,000 families in nine colonies who have been asked to evict, only 23,974 families have been allotted apartments under JNNURM. In the first phase, the government covered 6,368 families and the second phase was supposed to take care of 19,360 families. The administration had planned to construct 25,728 flats on the outskirts of the city. The construction remained on paper. Only 12,736 flats have been built so far. The Estate Office says 12,992 flats are either under construction or have been shelved due to lack of funds.

"If Chandigarh's formula of eco-sensitive zone is applied to Punjab, all the existing construction in Kansal will
be deemed illegal"
-Santosh Kumar, Chief wildlife warden, Chandigarh

On May 31, the police beat up slumdwellers protesting the administration’s order. “There are several discrepancies in the way these people have been evicted. The biometric survey did not even cover 50 per cent of the people,” says Arjun Sheoran of Ghar Bachao Abhiyan, a Chandigarh-based non-profit working for the rights of the homeless.

Since 2008, the administration has been seeking a “world heritage site” tag from unesco for the capitol complex in the north of the city close to the disputed area for the Tata Housing project. However, to achieve this feat the administration must resist the onslaught of haphazard construction. Can it accomplish this without evicting its poor?