ON June 7, the demand for electricity in Delhi touched an all time high of 5,654 MW. The power available to the city was 5,300 MW. The grid could not cope with the demand, resulting in large-scale load shedding.

A few aspects make this seemingly ordinary event noteworthy. First, the peak demand almost always coincides with extreme temperature conditions. But this year’s heat wave was not the most severe the capital had seen, according to the meteorological department of Indira Gandhi International Airport. This indicates there are other factors aggravating summer temperatures.

The demand peaked because of the relatively recent trend of using air-conditioners April-May onwards. This was noted by state government-owned power transmission firm Delhi Transco last year when the demand peaked in June. Earlier it would peak in July-August when the ACs would be switched on for the first time to counter the humid monsoon months that render desert coolers ineffective. One of the main reasons behind the early use of ACs is the modern buildings which, more often than not, are incompatible with local climate. Urban landscape and pollution, which do not allow heat to dissipate after the sunset, aggravate the problem.

ACs, which are fast becoming the most common solution to the problem of summer heat, account for 28 per cent of the total monthly electricity consumption in Delhi during summers. According to an estimate by the Bureau of Energy Efficiency, Delhi, ACs are responsible for 60 per cent of Delhi’s peak electricity demand. A study published in 2011 by the Indian Statistical Institute, Delhi, says that the rise in temperature from 30°C to 31°C increased demand for electricity by 3.2 million units in 2009, compared to only 1.2 million units in 2000.

ACs not only consume more electricity, they also heat up the surroundings. According to a study done by the University of Tokyo in Taipei City, Taiwan, the heat discharged from ACs was responsible for raising temperatures by 0.5°C to 2°C during evenings (7 pm to 2 am). Ninety per cent of households in Taipei City have ACs, while the figure in India is three per cent.

The study by the Tokyo university also found that the construction material and architecture of the building, and the location of AC exhaust inside the building, affect the temperature. Installing the compressor unit of split ACs in balconies instead of the roof affects the air temperature more and causes an increase in power consumption by up to 11 per cent. 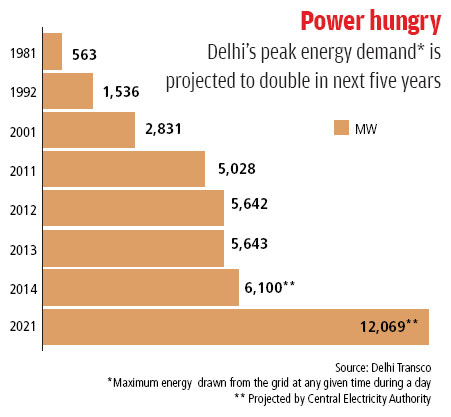 “Our house used to be comfortable even during peak summers, with cool breeze coming from the windows,” recollects RavindraBhan, a landscape architect living in Defence Colony, Delhi. But his neighbours have now installed ACs with the compressor units facing his house.

“The house has now become hot, as the windows catch the AC exhaust. We have been forced to seal the windows and install ACs,” he says.

Most modern buildings are dominated by western architectural styles. Excessive use of glass, concrete, flat roofs and large windows not only heat up the outdoors, but transfer heat to the interiors. Without electricity, such buildings become a solar oven. “The faith in modern scientific solutions to achieving comfort has side-stepped local building wisdom, and cooling comfort is increasingly delegated to technical experts, potentially with primarily commercial concerns,” says Karin Lundgren of Thermal Environment Laboratory, Lund University, Sweden.

Last year when Delhi Transco noted a sudden increase in peak demand for electricity on three consecutive nights in May, officials found it unusual as industries, shops, offices and malls are closed during night. This year, the weekly peak power demands were observed on weekends, with the record breaking demand reported on a Saturday. These upsurges in power demand indicate that the residential sector has upstaged the commercial sector in usage of ACs in Delhi. A study done by Kanvic Consultancy Pvt Ltd in 2012 also says that the residential sector has overtaken the commercial sector in purchase of ACs in India.

A study by the Lawrence Berkeley National Laboratory, US, estimated India would need to construct 300 coal-fired power plants of 500 MW each by 2030 just to run ACs in the country. The study assumes that AC ownership would rise to 47 per cent of urban household from the current three per cent, as stated by the National Statistical Organisation in a 2012 report. In China, AC penetration went from zero to 100 per cent in 15 years (1997 to 2012).

If India sees a similar boost, the crisis could get very severe.

The Associated Chambers of Commerce and Industry of Indiasayssale of ACs in the National Capital Region has increased 40 per cent from last year, while the increase in sale of coolers has been 15 per cent. This has been attributed to rising household income. Having grown accustomed to ACs at their workplace and cars, people now perceive ACs as a necessity.

Not only have people started using ACs from April, most of the time the thermostat is set at 18°C-19°C. As per the National Building Code of India-2005, 25°C to 30°C is the thermal comfort range for humans, with the optimum temperature being 27.5°C. One of the reasons behind the need to set the temperature so low is that people wear clothes unsuited to the weather. Maintaining low temperatures makes ACs guzzle even more energy.

Studies have shown that for every degree decrease in the thermostat setting, there is an energy consumption rise of three to 10 per cent.

The government tried addressing the problem of excessive power consumption by enacting the Energy Conservation Act in 2001. But the efforts have been insufficient and ineffective. The sharp growth in sale of ACs and the real estate sector also have overwhelmed such attempts.

To promote ACs with higher efficiency, the Bureau of Energy Efficiency has been running a rating system since 2006. Still the average efficiency of ACs sold in India is one of the lowest in the world because the rating system is not rigorous. A five star-rated AC in India would get just 2.5 stars in Australia. In India, effectiveness of ACs is tested at 35°C while the outdoor temperatures are over 45°C.

The government drafted the Energy Conservation Building Codes (ECBC) in 2007 to lay down guidelines for energy use in commercial buildings. But these are still not mandatory and not a single ECBC-compliant building has been constructed in the country.

ECBC guidelines are quite lenient too. They do not cap AC usage and allow 60 per cent area of a building’s facade to have glass. Use of too much glass in facade traps heat. The guidelines do not even define temperature and humidity standards.

“Ideally, ECBC should specify the optimal thermostat temperature range to curb power consumption by ACs,” says RajanRawal, coordinator, Centre for Advanced Research in Building Science and Energy at CEPT University, Ahmedabad. With the residential sector becoming energy-intensive, the scope of ECBC needs to be expanded.

When Japan ran into a major power crisis after the Fukushima disaster in 2011, the government ordered that no AC in the country should run below 28°C and people should dress accordingly. Such measures can go a long way in putting a check on energy demand.

It is evident that the current crisis has been precipitated by a very small section of our society that has become accustomed to air-conditioners. Of six urban households in India, five still consume less than 100 kWh electricity in a month. An average AC will consume that much electricity in less than a week.

What the government needs to do is to ensure that urban plans and architecture curb formation of heat hot spots. It has to fix and implement ECBC guidelines to stop buildings from turning into solar ovens. Real estate developers should adapt buildings to changing climate conditions so that the occupants are not dependent solely on climate-control devices. ACs should be the last resort.