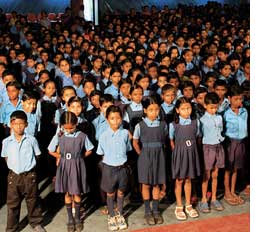 Every noon a merry bunch of children from low-income colonies of Jamshedpur cross the Subernarekha in a boat to study at the elite Carmel Junior College. They get dedicated teachers, books and a clean campus without paying exorbitant fees. Some even get vocational training. Five private schools in Jamshedpur have opened up their campus to 8,000 underprivileged children after a little persuasion by the East Singhbhum Jharkhand Education Project (jep).

Just a couple of years ago these children would loiter around in their bastis the whole day, occasionally attending the government schools. Even jep did not foresee that it would bring about a turnaround on this scale when in 2004 it proposed an evening school for underprivileged children at Jesuit-run Loyola School because of the paucity of land and soaring prices of raising infrastructure in the posh city. jep's programme coordinator Jayant Mishra was quick to realize that he needed to work on the lines of private-public partnership to cut the cost. If he could motivate 45 private schools in Jamshedpur to open their doors to educate the poor residents of the posh city, it would save the project a major part of the expenditure.

Initially, jep motivated private schools to provide their infrastructure for a few hours. But nothing much changed until the project prepared a blueprint and presented it before the schools along with modest sops and assurances. The blueprint mentioned that private schools' classes get over by afternoon. "We needed the infrastructure for just four to five hours for the children from bastis. We offered to give an honorarium to teachers and textbooks, stationeries and midday meal to children," says Mishra. "We asked for a partnership for a social cause, and they agreed after much convincing."

There was another hurdle in the literacy drive. It had little resources to track slum children. This became easy with the help of unicef. "We asked the administration to provide us statistics on the urban poor. Once we got the figures we sent out a team of volunteers to identify the children. We found that rickshaw pullers, auto drivers, hotel workers, domestic helps and labourers were eager to get their children educated. We identified over 10,000 such children," says Sukanya Balasubramanian, education officer, unicef, Jharkhand.

The strategy was an instant hit. Imposing buildings of private schools became a huge attraction for poor children. Soon schools started recognizing extraordinary children in afternoon classes. Kerala Samajam Model School transferred some of the bright students to its main English school. It even waived off their fees and gave scholarships. "Two girls, daughters of maids, who were given scholarship, topped our school. We enroll around 5,000 underprivileged children. They work and also study," says Vijyam Kartha, director of the Kerala public chain of schools.

According to unofficial estimates, this unique experiment has saved jep around Rs 7 crore by opening afternoon schools in Carmel Junior College, Kerala Samajam Model School, dbms English School, Delhi Public School and Loyola School. Students also get to participate in city-level contests. Students of Loyola School's afternoon classes won three prizes in the inter-school contest Horlicks Wiz-kids. The students are also getting jobs as office and courier boys, and are being trained to become electricians and drivers, as in Loyola School. Carmel School is giving vocational training to girls in tailoring and making baskets and beads ornament.

"This school is much better compared to my previous government school. Here we have good teachers, books are supplied on time, toilets and classrooms are clean. In our previous school, toilet was makeshift and class lectures not that serious. We want to enroll for a polytechnic course after passing out from here," say Hirok Mahato and Somen Mardi of Loyola School.

In afternoon schools, the dropout rate is low and the attendance of students and teachers high. Project officials think the private-public partnership should be on a bigger scale to improve the state's dismal literacy rate. "The World Bank rated Jharkhand as the worst state in the world for having the highest absenteeism rate of teachers. Its report put us in an embarrassing situation," says jep director Rajiv Ekka. "We are planning more such partnerships to boost literacy rate in Jharkhand."

The Union human resource development ministry has issued a directive to other states to follow the jep's East Singhbhum model and unicef has accepted it as one of the best practices in the education sector. The state capital Ranchi is trying to emulate the model. It plans to introduce the concept of afternoon schools in six private schools. That's a bench-thumping proposal.