A study claims that surfactants found in soaps and detergents pose little risk to the environment. But is that true? 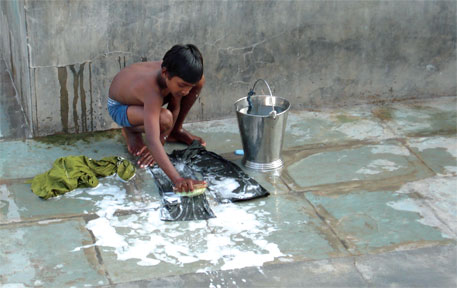 For decades environment and health experts have been fretting over the harmful impact of surfactants—active ingredients in everyday use products such as detergent, soap, shampoo and house cleaning products. These chemicals, uniquely formulated to remove oil, dirt and kill microbes, are the ones that create the suds and give that squeaky clean feel. Given their use, every day millions of tonnes of surfactants are released into the environment. Due to their potential toxic impact on health and the environment, there have been calls to reduce and ban the use of these chemicals in household products. So it was startling when a scientific study claimed that surfactants have little adverse impact on the environment.

The scientists arrived at the conclusion after reviewing 250 published and unpublished study papers on environmental properties and toxicity of four major surfactant classes: alcohol sulphate, alcohol ethoxysulphate, linear alkylbenzene sulphonate, alcohol ethoxylate and long-chain alcohol. The scientists prepared comprehensive reports on each class of surfactants and evaluated their risks to the aquatic and sediment environment using field monitoring data and computer models. The substances have no adverse impact on the aquatic or sediment environments at the current levels of use, they stated in the September issue of Critical Review in Environmental Science and Technology.

The study, conducted in association with American Cleaning Institute, an organisation representing producers of household, industrial and institutional cleaning products, and Procter and Gamble, a multinational consumer goods company, however, noted that the surfactants do need to be disposed of appropriately by following suitable wastewater treatment. Here lies the catch.

Existing sewage treatment technologies, especially in developing countries, do not completely remove surfactants. Arvind Kumar Mungray, lecturer at Sardar Vallabhbhai National Institute of Technology in Surat, who has carried out a series of studies on wastewater treatment, compared the effectiveness of three sewage treatment processes: activated sludge process, oxidation pond and upflow anaerobic sludge blanket reactor (UASBR). His team found that none of the methods could effectively remove surfactants. UASBR, a common sewage treatment method, could remove only 18 per cent of the anionic surfactants—present in commonly used household cleaning products (see ‘Agents of cleaning’).

Explaining the limitation of sewage treatment technologies, Mungray told Down To Earth, “Treatment plants based on UASBR method are not designed for removing surfactants. Only molecular oxygen can destroy surfactants. Therefore, an aerobic post treatment unit is required to be installed with UASBR. The key for protecting the environment from the negative impact of down-the-drain-chemicals, such as surfactants, is the treatment of the sewage in a biological wastewater treatment plant, Mungray says.

The study published in Critical Review in Environmental Science and Technology has another flaw. In non-urban areas sewage water is hardly treated. In developing countries, the contaminated water is often directly let into water bodies, or the washing processes take place right on the banks of water bodies. Such direct release of surfactants into the environment can harm both living and non- living elements in the environment.

According to a study by researchers in Poland, surfactants, even if removed as sewage sludge, may get transformed into compounds such as nonylphenols, known to disrupt endocrine functions. More often than not the sludge and the effluent streams are let out into surface waters or used as fertilisers in agricultural areas. These practices can contaminate the environment due to dispersion of pollutants, notes the study published in Journal of Analytical Methods in Chemistry on January 14 this year.

Besides, says Ewa Olkowska, corresponding author and chemical faculty at Gdansk University of Technology in Poland, certain surfactants undergo bioaccumulation processes and cause chronic toxicity to aquatic organisms. They disturb the biological functions and can cause cell lysis and death in living organisms. Olkowska further explains, “The occurrence of surfactants in abiotic elements of the environment can have influence on the processes between ‘air-water’ and ‘water-solid interfaces’ (for example, suppression of evaporation processes, reduction of oxygen transport from air to water, damping of surface waves, influence on cloud formulation, easier migration of other pollutants and accumulation on solid surfaces.).”

To mitigate the harmful effects of surfactants on the environment, Olkowska proposes the development and use of environment friendly compounds, or biosurfactants. They are surfactants produced by microbes, and are hence biodegradable and relatively less toxic. Research on biosurfactants is being extensively conducted at present.

Justifying the claims of the study Critical Review in Environmental Science and Technology, Hans Sanderson, corresponding author from Aarhus University in Denmark, says surfactants when treated using a good wastewater treatment plant present a low risk to the environment. But its benefits outweigh the risks. The compound’s intrinsic toxicity has not changed as much but their biodegradability has due to technological advancement. Wastewater treatment methods have also evolved, he says.

But experts do not agree. “Surfactants can be benign or very dangerous depending on the type, dosage and mix,” says P Somasundaran, director of industry at University Center for Surfactants for Advanced Studies in Novel Surfactants, Columbia University in the US. Disagreeing with the findings, he says, “One cannot make a misleading general statement about any chemical, let alone surfactants.”