Environment ministry clears projects, even those rejected earlier, at an unprecedented rate

The Union Ministry of Environment and Forests (MoEF) seems to be in a rush to give clearances to development projects. Since January this year, MoEF has given green signal for forestland diversion at an unprecedented rate. It has even diluted some provisions of the law to clear proposals that were earlier denied clearance.

As per an analysis by Delhi NGO Centre for Science and Environment (CSE), the rate of granting clearances has increased by 42 per cent compared to last year. Since the start of this year to April, MoEF has allowed diversion of 12,571 hectares (ha) of forestland. It had cleared 26,595 ha of forestland in the entire last year (see ‘Forests cleared’). Of the forest area diverted in 2013, 42 per cent was for mining, 22 per cent for irrigation projects, 10.5 per cent for roads, 8 per cent for drinking water schemes, 6.5 per cent for hydro power projects and the rest for defence, transmission lines, pipelines, wind power and railways.

In addition to the fast pace of granting clearances, the rate of rejecting projects has nosedived—a mere 3.5 per cent for the period (January 2013 to April), almost half the rejection rate for forest clearance since 1981, according to CSE. MoEF’s forest advisory committee (FAC), which decides on the clearances, has kept pending one-fourth of the proposals owing to the need for additional information from the states or proponents (see ‘Project tally’).

Making wrong right
Such seems to be the urgency that MoEF has given a go-ahead to proposals that were earlier held in abeyance. In doing so, the ministry has overlooked gross violations of the provisions of the Forest Conservation Act by the project proponents, finds CSE. The violations were noted by FAC and, hence, the projects were denied clearance earlier. For instance, in Chhattisgarh’s Hasdeo-Arand Coalfield 1,988 ha has been considered for diversion in favour of the Gujarat Mineral Development Corporation Limited. FAC had rejected this diversion in 2010, saying the area falls in the “no-go” zone. In another controversial decision this year, FAC approved diversion of 1,000 ha in Maharashtra’s Raigad forest division following a request by the chief minister. The diversion will pave the way for a drinking water supply project on the Kalu river proposed by the Konkan Irrigation Development Corporation. 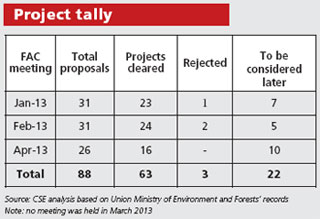 The project was rejected in 2012 on grounds that the proponent had neither furnished an environmental assessment report nor a rehabilitation plan; the project lay within seven kilometres from a wildlife sanctuary and ecologically sensitive areas of the Western Ghats and; breach of contract by the state of not taking any new project in the area. While granting the clearance in January, FAC expressed concern over the overall impact of the project but also justified it using Maharashtra’s stand: given the rapid urbanisation and subsequent increase in demand for drinking water, the Kalu river project is necessary.

Such decisions by FAC of overlooking the cumulative impact of projects owing to the pressure from the Central and state authorities is fast becoming a trend.

Take the Tawang Hydropower Project Stage II in Arunachal Pradesh that involves 117 ha of forestland. During its earlier meetings last year, FAC had set aside the project for want of a comprehensive study to assess its cumulative impact in the Tawang basin. Later FAC was informed that in a meeting between the Ministry of Power and MoEF it was suggested that the “forests ministry may not insist on cumulative impact assessment while considering the proposal of very first project in the Tawang River Basin”. FAC in its January 2013 meeting cleared the project noting that demand from the Centre and states was mounting.

It is not just ecology that has been ignored. Wildlife too has taken a backseat at instances of granting clearances. In December last year, clearance was granted for 778 ha to Rohne Coal Company for mining in Hazaribagh, Jharkhand. A report by a FAC subcommittee in September 2012 noted the western part of the mining area, between Hazaribagh Sanctuary and Palamau Tiger Reserve, is a significant wildlife corridor, especially for elephants. Following the observation, FAC said the mining project will be considered further only after submission of a wildlife management plan by the state. But in December when the project was considered for clearance, no plan was prepared or produced.

Another instance where wildlife has been undermined is in Jharkhand’s Saranda forest division. In its January meeting this year, FAC allowed diversion of 1,000 ha for mining activities in favour of JSW Steel Limited. During the same meeting, 512 ha was also granted in the same division for iron ore mining by Jindal Steel and Power Ltd. Saranda forest is an important habitat for elephants. Diversion of forestland and subsequent mining activities in the area will lead to fragmentation of the forest, a fact highlighted in a site inspection report of the chief conservator of forests.

Besides dilution of clauses, violation of regulations are also being played down while granting of clearances. FAC had allowed Mahanadi Coalfields Limited to mine in 1,300 ha in Odisha despite knowing the company was violating the Forest Conservation Act.

FAC itself noted the company had undertaken mining activities in 586 ha without obtaining an approval. It has also illegally allowed Power Grid Corporation of India Limited and Odisha Power Generation Corporation Limited to use part of its mine lease area for non-forest activities. What’s more, the company did not provide any evidence on settlement of rights of forest dwellers. Still in December last year FAC granted clearance to the company, saying it is a public service unit.

From the way MoEF is granting approvals, it seems it is under dual pressure from the Cabinet Committee on Investment (CCI) and industry. CCI, headed by the prime minister, is envisaged as a way to deal with bureaucratic red tape that may harm growth of the economy. It has the authority to approve any project, which no other ministry or government department can contradict or overrule. Since its inception in December 2012, CCI has been instrumental in putting pressure on MoEF for giving clearance to big ticket projects. And this trend is clear from the number of clearances granted since January 2013.