Scientists are learning that the Indian monsoon is an integral part of the global ecosystem. The knowledge of these 'global teleconnections' is helping them to predict the monsoon. 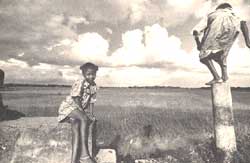 THIS was one storm that the meteorologists couldn't predict. When Vasant Gowariker, scientific adviser to the Prime Minister, and a team of meteorologists from the India Meteorological Department (IMD), announced in early April that the coming monsoon will be on the lower side of normal, the prediction drew a great deal of flak.

BJP leaders, for instance, felt that unscientific and alarmist predictions, though tentative, will only encourage anti-social elements to hoard foodgrains. Many scientists, too, were critical of Gowariker's monsoon models, which, they felt, had received undue publicity, especially since their scientific veracity was debatable.

But nobody can dispute the fact that it is very important to be able to predict the nature of the most crucial weather-related development in India -- the summer monsoon. Union finance minister Manmohan Singh is reported to be extremely worried about this year's monsoon. Poor rainfall could send the country's economy and the government's structural adjustment programme into a tailspin.

After the severe drought in 1987-88, scientists at IMD were forced to find an appropriate forecasting technique. They were severely criticised for having failed to predict the severest drought to have hit the country in 20 years. The then Prime Minister, Rajiv Gandhi, reportedly told a meeting of environmentalists, "Till the middle of July 1987, the meteorologists kept telling me that the monsoon would be normal though we could not see rain anywhere. And then they sprung the El Nino at me." Subsequently, a committee was instituted within the IMD to focus on predicting the monsoon and gauging its intensity.

The monsoon, which is really a sea breeze on a planetary scale, is caused by the differential heating of the vast Asian land mass and the ocean. As the warm air over the continental mass rises, a large low pressure area - the monsoon trough - progressively develops over northern India, Pakistan, and West Asia. The southwesterlies blow in from over the sea bringing dense rain-bearing clouds that strike the country's western coast and steadily move northwards. The mechanics of the monsoon are simple enough, but there are a number of global and regional factors which must be taken into account while gauging a particular monsoon's strength and progress. They involve complex land-atmosphere-ocean interactions, some of which are poorly understood.

An ocean current from Somalia that cools the Arabian Sea just before the monsoon or a high-pressure zone over Tibet apparently have an effect on the monsoon. A number of other parameters that have a bearing on the rains have also been identified.

Prediction models have been developed using meteorological teleconnections, or statistical associations in space and time of widely separated events that have a physical connection with the monsoon.

In 1988, Gowariker, who was then secretary to the department of science and technology, with a team of meteorologists from the IMD, New Delhi, and the Indian Institute of Tropical Meteorology (IITM), Pune, developed a new approach to long-range forecasting.

Using 16 temperature, pressure, wind and snow cover parameters from across the world, which apppear to have a bearing on monsoon circulation, the team developed parametric and power regression models which provide both qualitative and quantitative forecasts of monsoon rainfall.

The basic premise of the Gowariker models is that the earth's land-ocean-atmosphere systems start their preparatory work for the monsoon event much before its actual occurrence. The factors that determine the shape of the coming monsoon start surfacing one by one and become significant in their own time frame as a cumulative phenomenon. This build-up process starts from the winter months and the full picture unfolds itself by the end of May. "This is when the IMD sticks its neck out," says S M Kulshrestha, director general of meteorology, "to give a quantitative assessment."

G S Mandal, deputy director at IMD, who was part of the team that developed the models, says, "The forecasts made so far have been fairly reliable and the metereological department is quite confident." But, Kulshrestha is more cautious. "Forecasts, like medical diagnoses, are not conclusive and only time can prove whether they are correct," he points out.

Temperatures over the eastern coast and northern parts of India (including Jaipur, Jaisalmer and Calcutta) in March, central India in May, and the northern hemisphere in January and February are recorded and used in various computations. High temperatures are conducive to a good monsoon. The snow cover on the Himalayas from January to March is still monitored. Because of the reflective or albedo effect of snow, the greater the snow cover, the less is the net radiative solar heating on a continental scale. This translates into a poor monsoon. Normal snow cover, according to Kulshrestha, extends for some 25.9 million sq km. This year, the snow covers as much as 26.1 million sq km which is going to affect the monsoon adversely.

The El Nino ("Child of Christ") phenomenon, or the warming of surface waters off the west coast of Peru, was apparently partly responsible for the 1987 drought. An El Nino in the previous year indicates a good monsoon in the following year, while an El Nino in the same year has an adverse effect on the monsoon. (See box: What is El Nino?).

In 1988, Gowariker's team found that over the last 37 years (1951-1987), there had been seven moderate and severe El Nino years and on all these occasions but in 1966, the monsoon in the subsequent year was normal. When the period under study was extended to 87 years (1901-1987), there were seven severe El Nino years and the monsoon was found to be normal in all the ensuing years. However, scientists caution that no single parameter alone has a one-to-one relationship with monsoon. The 16 parameters are thus analysed in combinations of two or more.

Extreme conditions have also been observed. Gowariker's team is careful to mention that their models do not attempt to elucidate the necessary conditions, but only indicate whether sufficient conditions exist for a good monsoon. It was observed that, despite a number of adverse signals, the monsoon could still be normal. There was, thus, a need to determine the importance of each individual parameter and weigh them accordingly. These were then used in what is known as a power regression model. On testing these equations using historical data, it was found that the quantity of rainfall forecast was fairly close to the actual rainfall.

However, many scientists have yet to be convinced of the reliability of Gowarikar's models. Kulshrestha points out that these models do not provide a completely objective method of prediction. A great deal of brainstorming and extrapolation is necessary to produce a forecast. "The interpretative ability of the scientists involved is crucial to the success of the prediction," according to him. P K Das, the former director general of the IMD, says the onset date of the monsoon over south India and the total rainfall over different parts of India, that is, northwest and peninsular India, are determined by using regressive techniques. He has himself worked on the Autoregressive Integrated Moving Averages (ARIMA) technique. Here the monsoon rainfall of specific regions over the years is taken into account in an attempt to ascertain future rainfall.

Das doubts the predictive value of Gowarikar's models. He argues that since the models provide an overall rainfall figure, they are of little use. Given the great variability of the monsoon, the rainfall in particular areas like northwestern and peninsular India is critical and the model fails to address this aspect.

Other scientists point out that over the last few years when the models have been in use, all the monsoons were normal, and, as such, the statistical chances of correctly predicting a normal monsoon are high. Whether the model can successfully indicate a very good or a very deficient monsoon well in advance remains to be seen.