Visual documentation of illnesses is integral to healthcare in the West but a rarity in India. Sayantan Bera charts the hows and whys of medical photography 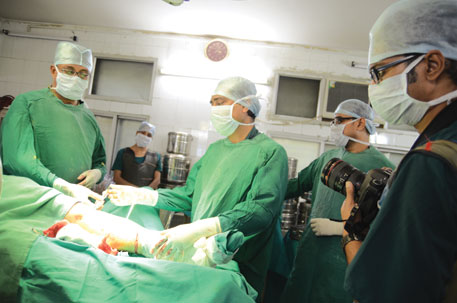 Oystein Horgmo was walking back to his office in a cancer hospital in Norway when he spotted an elderly couple sitting at the end of a corridor. As he passed them by, the couple got up, ready to leave. “The woman adjusted her wig just slightly (cancer patients undergoing chemotherapy tend to lose a lot of hair), looking at her husband to be her mirror. They nodded and they left. Just a few seconds, but to me it said everything about the horror and turmoil a cancer diagnosis sends into a normal life. The need to stay normal and the longing to lead a normal life again. And how important family members are when the lightning strikes,” wrote Horgmo in an entry titled “A sudden jolt of sadness” on his blog, “The sterile eye”.

The ordinary moment would have escaped a hospital staff but Horgmo is an observer by profession. He works as a medical photographer tasked to document diseases, deformities and treatment procedures. It is not an easy job to invade a patient’s privacy and photograph the frailty of the human body at its most vulnerable. The situations range from challenging to funny. To ensure while videographing a surgery that the varying shades of red inside the body are captured perfectly, thus allowing the medical student to distinguish between organs. Or, to photograph skin abscesses in one’s natal cleft—with the patient spreading his buttocks with his hands. “A potentially embarrassing position” in which a patient told Horgmo, “I’m sorry. This isn’t the most delicate of views.” Almost letting out a laugh Horgmo replied, “I guess you’re right. But then again, we didn’t sign up to shoot fashion.”

“It is challenging to shoot in an operating theatre because you have to deal with extreme contrast of light. Starting out as medical photographer, I was a bit anxious of how I would react to seeing a person being cut and dissected. It turned out that what I saw was not the challenge; rather what I smelled. I have never had problems with seeing blood in my work, but the smell of burnt flesh when surgeons use electric scalpels (diathermy) still gets to me sometimes,” says Horgmo, now with the University of Oslo’s medical faculty.

Medical photographs of terminal illnesses like cancer, liver cirrhosis or brain tumour can look chillingly beautiful under the lens. The book, Hidden Beauty: Exploring the Aesthetics of Medical Science, published this year, is replete with such breathtaking images. The lacework of cells inside the human brain suffering from tumour looks more like an abstract painting in varying shades of violet. The cover image of the book resembles a collection of beautiful sea shells, which actually is a collection of gall stones extracted from patients. 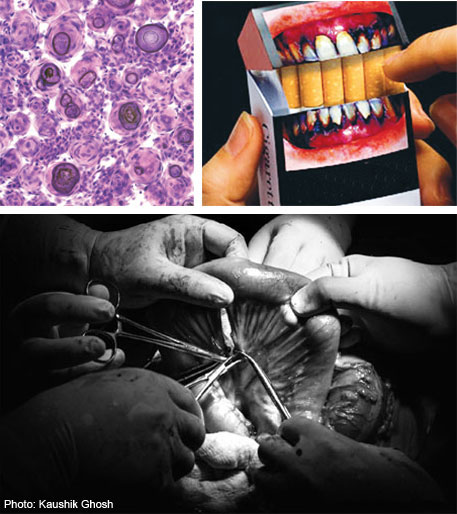 Norman Barker, the photographer of Hidden Beauty, remembers the day 30 years ago when the fresh arts graduate was asked to photograph a kidney riddled with cysts extracted during an autopsy. “The physician told me to make sure that it is beautiful because it was being used for publication in a prestigious medical journal,” writes Barker in his book, “I can remember thinking to myself; this doctor is crazy, how am I going to make this sickly red specimen look beautiful?”

“Almost everybody looking at the book will have one of those diseases or know somebody who has one of those diseases... the disease becomes an identifying feature of themselves, they relate to it and want to understand it not only because they have to make important treatment decisions... but almost as if to understand something about themselves,” said Christine Iacobuzio-Donahue, co-editor of Hidden Beauty and professor of pathology at the John Hopkins Hospital, in an interview to BBC.

In a way, Hidden Beauty marks the evolution of documenting medicine—from the earliest anatomy illustrations by Leonardo da Vinci, which still figure in medical textbooks, to microscopic images using cutting-edge technology that are visual treats. Still, the raison d’être for visual documentation remains the same—to track progress of a treatment, knowledge sharing among practitioners, archiving and in teaching medicine. Medical photographs can also be used as a campaign tool in public health. Graphic depiction of a smoker’s lungs or throat cancer on a cigarette pack can be an effective way to dissuade a smoker.

A few months ago, Kaushik Roy, neurosurgeon at a state general hospital in Kolkata, operated on a rare brain tumour. “There were no photographers available and I could not remove my gloves to shoot even if I had a camera,” says Roy. “Not only is our record-keeping poor, we cannot even publish in top journals for want of visual evidence,” he adds. Medical photographers are integral to hospitals in the West, for instance at the National Health Service in the UK, as part of the medical illustration and records department. But they are rare in India. We still get shoddy photos clicked by surgeons on their phone or by dentists on their digital point-and-shoot that serves little purpose. “I have seen medical images in their worst form during presentations in conferences: too dark, too much light, lack of sharpness, important details buried or messy, serial photographs that do not match. They are casually shot with no plans to archive the work,” says Kaushik Ghosh, who set aside an MD degree in internal medicine to pursue a career as medical photographer. 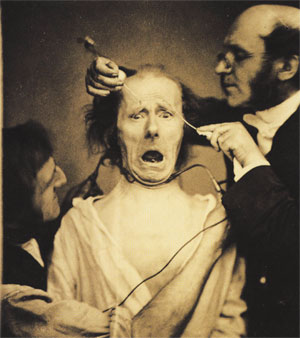 Admittedly, Ghosh is in a vantage position as he explains, “A medical photographer requires the basic knowledge of human anatomy and surgical procedures besides being technically sound as a photographer. Inside the operation theatre you cannot ask the surgeon to move for you to have a better view. You cannot ask questions as to what is going to happen next. It’s like covering war.”

The imperative of documenting medicine, says Ghosh, begins with a full-time course in medical photography. At present, no medical college in India offers such a course. However, the Post Graduate Institute of Medical Education and Research (PGIMER) at Chandigarh is planning one, informs Ghosh who is designing a curriculum combining the basics of medicine, imaging and ethical guidelines. PGIMER and AIIMS, Delhi, are among the handful of medical research institutes in India with full-time photographers. “We are planning a one-year course that will initially train photographers working at government hospitals. Later, the course will be opened for outsiders,” says N Khandelwal, head of the radiodiagnosis department at PGIMER. “Till now, photographers at government hospitals covered events and conferences more than diseases and surgeries. The course will train them to be skilled clinical photographers,” he adds.

To learn from a surgery in progress, a student in India has little choice but to peep from behind, with 25 others crowding around. Narrative audiovisuals, say on a web portal, would be of use not only to the student but also a layperson. A patient might also want to know what’s happening inside his body.

Way back in 600 BC, Sushruta, the Indian sage widely believed to be the father of surgery, described procedures such as making incisions to C-sections, reconstructing an injured nose and the first known use of anaesthesia. His book, Sushruta Samhita, had illustrations of nearly 178 surgical instruments. Sadly, we lost the original manuscript. “The West is diligent in documentation and archiving but we are absolutely reluctant to do so. Practitioners prefer to maintain medical records as technical observations on paper,” says Ghosh.

Indian hospitals, even posh ones which offer luxury suites for Rs 75,000 a night do not keep visual records of cases. A possible reason, apart from the question of “who will bear the cost”, says Anjonn Dasgupta, senior surgeon in Kolkata, is that “doctors in India have medico-legal worries at the back of their heads. There is reason to believe they will feel insecure of keeping visual records of treatment procedures.” More so, when medical negligence is common. Still there are others, like neurosurgeon Kaushik Roy, who think visual documentation can help avert legal worries in future. “Suing for medical negligence is not yet a practice in India. Besides, a doctor can also be spared punitive action if visual evidence proves no negligence on her part,” he says.

Henry Lou Gibson, an American photographer who pioneered the use of infrared radiation wrote in his 1973 book, “Patients are people—people with problems. They are often in pain and usually apprehensive. To them, medical photographer is someone who, once more, submits them to an institutional routine. He takes their pictures, with part or all of their clothing removed, to show what is usually an embarrassing condition or deformity. Again, indispensable as photography is in the teaching and advancing of medicine, it does not present to the patient the same direct benefit as a radiograph or a blood test.” Forty years later, a new breed of patients are thinking differently. They are eager to understand their medical condition better, and someday we may see them posting photos on Facebook!