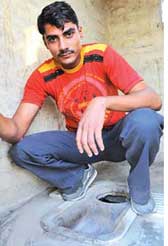 A young farmer used manure of a community toilet, lowered his cost of cultivation

Shyam Mohan Tyagi can't stop feeling jubilant. As he surveys his paddy field, there is a distinct glint in his eyes. It is puzzling because his crop looks exactly the same as those in adjacent fields. Tyagi is quick to explain the difference the paddy in his field has been nurtured on a diet of urine and decomposed human faeces. He has stopped using fertilizers since 2006.

Tyagi collects urine and decomposed faeces from the special community toilet in his village Asalatpur in Uttar Pradesh's Ghaziabad district. It is a dry toilet that separates excreta, urine and water, so that waste can be used as manure with little treatment. It is called ecosan, short for ecological sanitation.

Selling the idea of ecosan toilets to the villagers was not easy.When Delhi-based ngo, Foundation of Development Research and Action, that set up the toilet in 2005 proposed making use of the collected waste, there were no takers except Tyagi, a 30-year-old history post-graduate.Many farmers use human waste as manure but they baulked at the idea of spraying urine on food crops.

Young as he is, Tyagi was eager to test the pilot project on his one bigha (0.08 hectare) field. His father Moolchand Tyagi did not approve of using decomposed faeces in the field, but he went ahead and the results were encouraging. He did not have to compromise on yield while saving on fertilizers.

Earlier, Tyagi used to spend Rs 1,500 per year on applying diammonium phosphate on seedlings and Rs 1,000 on urea on grown crops and vegetables. "The same farmers who didn't like using urine often steal vegetables from my field," he said, chuckling.

Villagers' mindset has indeed changed. They are now demanding household-level ecosan toilets to generate more manure. "During my time we used dung because chemical fertilizers are harmful, but now I see the growth of the crops in my field is much better after my son started using urine. Production of this kind of local manure should be increased to meet the demand," said Moolchand.

The ngo has been campaigning in the area since 2002. Sitaram Nayak, its field officer who spearheaded the campaign, said, "We began by talking to the pradhans of four villages, including Asalatpur, about their methods of farming, fertilizer use and cost. We used to visit the villages twice a week." The next step was to introduce the concept of ecosan toilets and explain how it would improve sanitation, help them reduce the expenditure on fertilizer, and maintain soil health; human excreta is rich in soil nutrients (see boxRich waste).

Most big farmers saw the point but the majority, used to defecating in the open, was hesitant. The ngo, along with the big farmers, formed a group and organized workshops. It brought delegates from Sweden, from where it gets technical support. It tried various types of toilet pans, like those made of cement and fibreglass, before deciding on using the ceramic ones because they are easy to clean.

The toilet was ready for Rs 18,000. But who would maintain it? Few showed interest in the task. Once again Tyagi volunteered. "It took us two years of awareness programmes and demonstrations to motivate people," said Nayak. Today about a hundred people regularly use the community toilet.

Merely using the community toilet was not enough; it had to be used properly. In the beginning people would bring a litre of water and wash in the space provided for defecation. This slowed faecal dehydration. "We told them to use only half a litre of water and to wash in a separate area provided for the purpose," said Tyagi. This water is collected separately and channelled directly to agricultural fields through a pipe. It does not enter the urine tank or the faecal storage tank.

Residents of Asalatpur are coming round to accept the ecosan toilet. Twenty per cent people in the village are of lower caste and work as agricultural labourers. Noorjahan, 52, a farm worker, said, "Upper caste people object to our defecating in their fields, so I had a small pit latrine in my house and the excreta was manually removed for which I paid Rs 20 per month. But now I use the community toilet."

Tejveer, a class 12 student, said the community toilet was uncomfortable to use because it did not use water. Nonetheless, he is using the toilet every day. It does not smell as bad as conventional toilets do because separation of urine and water quickens faecal dehydration, according to Veena Sharma, the ngo's programme coordinator. Adding ash, as every user is supposed to do after defecation, increases the alkalinity of the excreta, thereby suppressing the growth of pathogens without killing bacteria involved in decomposition.

According to Tyagi, the community toilet provides 500 kg of compost every three months. The compost is used as soil conditioner; it improves the organic content and water-holding capacity of the soil. "I irrigate the paddy once a day, while others irrigate twice a day because the soil in our village is sandy," he said.

The urine is diluted with water to a tenth part and applied on crops at the rate of 2,000 litres per hectare. As the demand increased, the ngo started collecting urine from two private schools in adjacent colonies, Bal Vikas School in Uttaranchal Colony and Ideal Public School in Premnagar. Tyagi is thinking of the next step he plans to sell urine at 50 paise a litre.