Coming to grips with survival

Coming to grips with survival 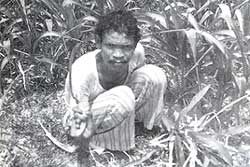 MODIFIED agricultural implements that could be used by the leprosy-afflicted has made agriculture a worthwhile profession in Shahadara's Tahirpur leprosy colony in Delhi. Although farming in the colony started 17 years ago, the leprosy-afficted farmers could not use conventional implements as many had lost fingers or limbs. The scenario has changed dramatically since 1993: the farmers are reaping high yields by using ingeniously-moulded ergonomically-designed plastic grips for the implements.

Only 15 families out of the 64 household members of the Gandhi Krishi Kustsh Udyog Sanstan (GKKUS), a society formed by some Tahirpur residents, are actively involved in farming because the rest are completely disabled. Says 52-year-old Mastan Sharif, president of GKKUS for the past 8 years, "Besides farming, I also engage in carpentry and minor electrical works."

Tahirpur is inhabited by nearly 2,000 leprosy-afficted households. Living conditions are dismal and the nutrient deficiency is acute due to low intake of vegetables and fruits. Today, thanks to the efforts of the All-India Women's Conference (AIWC), a Delhi-based NGO, the 15 active members of GKKUS produce wheat, paddy, cauliflowers, chillies, tomatoes and fruits for local consumption. The AIWC project is funded by the Food and Agricultural Organisation. The AIWC provided technical guidance and inputs and implemented their plans on a 7.2 ha farm plot allotted by the Municipal Corporation of Delhi.

In the days before the project, the disabled farmers found it difficult to use conventional agricultural implements. But it was the plight of 45-year-old Rudra Bahadur, who was severely handicapped by leprosy and was unable to grip ordinary implements at all, that spurred on the farmers of the colony to look for a solution.
The solution came in 1993, when the idea of using moulded plastics to make special grips of important implements occurred to some farmers. Locally available plastic materials like broken buckets and mugs were melted and reshaped to provide the special grips. The shape of a grip was determined by a particular farmer's mutilated fingers. Shankar Singh, a 48-year-old farmer, says, "The moulded implements give a good grip while weeding and levelling the land." Says Sharif, "A handicapped farmer can now perform various operations without injuring himself."

The project director of AIWC, Padma Venkataraman, says, "The leprosy-afflicted are highly-motivated. What they require is guidance and motivation." The farmers have now learnt to manage themselves after the AIWC provided the basic infrastructure. Says project secretary Pradeep Chaturvedi, "We cannot go on pumping in money. Once the suitable technology is taught, it should be handed over to the people."

The GKKUS members convene every month to discuss farming matters. Chaturvedi explains that after the technical guidance and inputs like tractor and tiller were provided, the farmers became capable of managing everything on their own. This was amply illustrated when a new borewell was dug. Members raised Rs 20,000 from individual collections, apart from utilising Rs 12,000 from the GKKUS fund. "The work was completed within a fortnight," says 27-year-old Satyan Das, son of a leprosy-afficted farmer and the president of GKKUS' youth wing. The farmers of the leprosy colony are also aware of the recent developments in agriculture. The Indian Agricultural Research Institute (IARI) recommended the appropriate cropping and irrigation patterns to GKKUS. "This year, we are planning to cultivate jaldi dhan -- a fast-growing variety of paddy that can be harvested in 72 days -- to avoid damages due to floods," says T A Thomas, a leprosy-afficted farmer.

Although all the 15 farmers have an equal share in the AIWC land, it is the individual farmers who decide what crops to grow. The surplus crop is sold in the market and 25 per cent of the sales goes to GKKUS, to be used to maintain the tractor and the borewell. The farmers pay proportional rent for the tractor, tiller and electricity, depending upon duration of use. Local residents can buy all products grown on the 7.2 ha land at half the market price.

What grows here at the farm are not only edibles but hope.