ORGANIC farming technologies involve adaptation to local environments. Continuing the series on organic farming (See Down To Earth, November 30, 1993), here are two more examples of such farming technologies. The secret of Karnataka's L Narayana Reddy's success is permaculture, or the art of cultivating several crops together. Vijayalakshmi and Balakrishnan of Palakkad emphasise they have greened a barren hillock without using any external inputs. 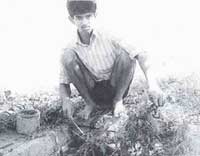 CATTLE urine fights pests such as white flies far more effectively than chemicals such as malathion; besides, dung manure doesn't lower paddy productivity, says organic farmer L Narayana Reddy, of Sorhanese village in Karnataka's Bangalore district. In 1978, Reddy received an award for producing 7 tonnes of ragi from a single ha. For his initial crops, he used some synthetic fertilisers in combination with the natural manure, but by 1979, he had completed the transition to organic farming.

Reddy started farming 28 years ago on the 1.5-ha, dryland plot he got as his patrimony. A matriculate who was once a hotel menial and then a lorry-cleaner, Reddy is now a name to reckon with in the field of organic farming. He is fluent in five languages, including English, and his expertise has taken him to Belgium, Holland and Germany.

Reddy's enterprise has brought material rewards, too. He has now increased his holding in Sorhanese to 3 ha, bought another 8 ha in Dharwad district and also owns a pukka farmhouse, with a cattle-shed, pumpset, fish pond, standing tree crops, tractor, cattle and sheep. Most farmers in the area, including Reddy, grow paddy in the command area of the tank in the neighbouring village of Varthur. Besides paddy, roses, coconuts, vegetables, ragi, eucalyptus and mulberry are cultivated with the help of well irrigation.
It is Reddy's farming techniques -- his innovative use of cattle urine as a pesticide, for example -- that sets him apart from his neighbours. Reddy uses a mixture containing cattle urine and neem leaves, steeped together in a small cement pit, as a pesticide. The urine that overflows from the pit enriches manure, leaf and biogas slurry composts in two pits measuring 90 cum each. Local grasses grown between rows of trees in the drip-irrigated orchards provide fodder and help retain soil moisture.

Coconut leaves, husk and weeds, put around coconut palms as mulch, decompose within a year and supplement the 12 kg of compost manure that is put annually in each of the eight pits dug at a radius of two metres around each tree. Each tree is connected to the drip system. The cost of setting up the drip system is Rs 75,000, but Reddy's son, Manjunath, justifies the expenditure saying it reduces labour costs and water consumption.

Reddy has mastered permaculture. Five curry leaf plants planted around each coconut tree in a 0.6-ha plot annually yield leaves worth Rs 12,000. Coffee plants are raised in rows between the coconut trees. Seasonal crops such as ragi, black gram, soyabean and pigeonpea were cultivated in this plot till 1990, when the coconut palms were still quite small. Bananas are planted as an intercrop in another 0.6-ha chikoo garden. Reddy says his system assures him an income even if one crop fails. Intercropping also reduces the chances of pest attacks by 25 per cent.

K Bhattacharya, director of Agriculture Man Ecology (AME), a Pondicherry-based non-governmental organisation, attributes Reddy's success in permaculture to intercropping and effective farm management practices. Reddy is now switching from cereals to more profitable horticultural crops. In 1992-93, he made Rs 67,800 from his 0.6-ha coconut garden; the inputs he used would have cost him barely Rs 20,000 in the market.

Guava trees bear fruit twice a year, but unlike other farmers, Reddy prunes the buds during the second season in December and does not water the trees till April. The single yield -- in September -- is greater than the two yields produced by other farmers.

Though plant-based pesticides are used, black marks can be seen sometimes on the guavas. Manjunath explains this is "perhaps because of the overuse of biopesticides to combat white flies". But A Sankaram, an agriculture consultant at Madras, says it results from unscientific preparation and application of plant-based pest repellents.

On Reddy's farm, 11 crossbred cows and 10 sheep provide milk and manure. Besides, he has 25 chicken, whose droppings also he uses as manure. Cooking gas comes from a biogas plant. The guava and chikoo trees are leased out locally, and the surplus farm produce is sold in Bangalore.

Reddy's says his method is not being picked up by his neighbours because "every farmer wants money immediately, and in organic farming, the gestation period is 4-6 years. No one wants to wait that long."

According to V S Puttanna, a farmer in Varthur, all farming is unprofitable nowadays because of high labour costs. "This is all the more true of organic farming, which requires far more labour," he says. "Reddy's returns are high because he and his family do most of the work, but what does one do if the family is small?"