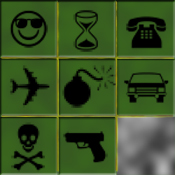 Video games have long been a controversial subject among critics, consumers and parents. They have been accused of desensitising children to violence and emphasising that violent behaviour is acceptable. These are valid criticisms. Partaking in virtual violence does have a seemingly realistic feel to it. But it's an aspect that has also of late fostered a distinct characteristic to video games. With game pyrotechnics becoming more advanced, the virtual world has become an arena for social simulation. Computer games have discovered politics.

Take Darfur is Dying (http//www.darfurisdying.com) for instance.The first part of the game requires the player to choose a member from a family of eight (from the father, Rehman, to the youngest child, Deng, aged 10) to collect water from a well near the village. The child must first find the well, taking care to avoid the Janjaweed militia. Success ensures entry to the second part of the game, where the player uses the water gathered from the well to manage resources in the refugee colony. The game was developed by students of the University of South California for the Darfur Digital Activist Contest, organised by the television channel mtvu, the Reebok Human Rights Foundation and the International Crisis Group.

Other games, such as Oil God (http//www.shockwave.com/gameland/oilgod.isp) and the MacDonald's game (http//www.mcvideogame.com) focus on environmental destruction, oil wars or even the fast food culture. The Macdonald's game, developed by the Italian game company, Molleindustria, gives players control over all aspects of the MacDonald's corporation.

In each zone of activity, the player is introduced to the morally ambiguous decisions that the multinational food conglomerate is required to make profits. Its fields are located in San Jose, Argentina, and increasing grazing lands require clearing rainforest, maybe even razing a village. A municipal corporator has to be bribed and cows fattened with hormones to increase the burger supply. Public relations people have to be deployed to manage pesky special interest groups offended by the multinational's actions. And, then children have to be attracted with devious advertising campaigns. The game's satirical tone ensures that at every point, you know the actual impact of your decisions overgrazing, for example, kills farms forcing the razing of more rainforests. But then moral compunctions have to be suspended for the sake of profits.

Another variety of games tries to educate players about managing emergencies. The Stop Disasters Game, (www.stopdisastersgame.org/playgame.html), produced by the uk-based game company PlayerThree for the un International Strategy for Disaster Reduction casts you in the role of a town planner with limited time to prepare five different disaster scenarios--flood, hurricane, tsunami, wild fire, earthquake. To mitigate the effects of a tsunami, you could install breakwaters along the coast of a town. However, breakwaters damage the local ecology. So you may be better off protecting the coral reefs that provide natural protection against tsunami attacks. Towards the end, disaster strikes and the way you've prepared for it determines how many die, how many are rendered homeless and how fast the economy of the region can recover.

The messages can also be retrogressive. For example, in Ethnic Cleansing The Game (http//www.resistance.com/ethniccleansing/catalog.htm), the player is cast in the role of a white supremacist, gunning down blacks, Hispanics and Jewish people.

Although the reviewer did not get a chance to actually play the game, reviews on the game's website said "This will touch the hearts of thousands of White people because it's not intellectual it's entertainment. Every young elementary school kid who plays this game will have visions of killing Ariel Sharon while sitting in class! When their history teacher asks the class if they've ever heard of Israel or Ariel Sharon, the White kids certainly will have." The game was developed by the us-based white supremist record company, Resistance Records.

Games have been used to educate people in the past, but not with such political overtones. And never with such spotlight on the player. This has led many to argue that an insidious individualism is fostered at the cost of dehumanising characters in the game--the child in Darfur, for example, is an object and not a sentient being.

With a generation increasingly dependent on the virtual world for entertainment and information, it will be interesting see what shape these games take.